Does PrEP, an HIV-preventing drug, make sense for gay men? 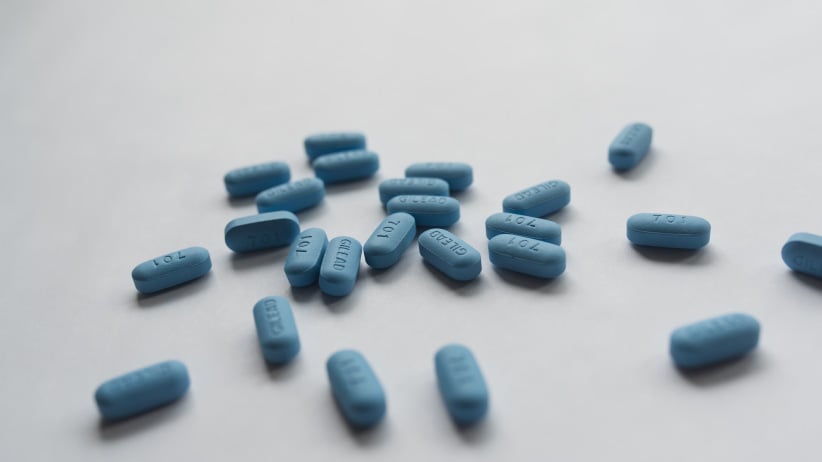 Scott, a university student in Toronto, first heard about the seemingly miraculous HIV-preventing drug PrEP a couple years ago when a character started taking it on the HBO show Looking.

Now, the blue pills are so common among gay men that “negative and on PrEP” is just another attribute Scott sees guys listing on profiles in the hookup app Grindr.

Scott has also seen the ads online and around town offering to educate men about a “new way that we are taking care of ourselves and having great sex.” The ads point to TheSexYouWant.ca, a site funded by Ontario’s HIV-AIDS service agencies that, among the options to have the sex you want, explains that PrEP stands for Pre-Exposure Prophylaxis, which means taking a daily, preventative dose of a medication—emtricitabine/tenofovir—that’s typically given to people who are HIV-positive.

And this month, as Pride has kicked into gear, he’s seen the giant posters on the walls of the city’s subway stations, pointing to the website PrEP4Pride.ca. The ads lead to the website of a pharmacy that calls PrEP “as safe as Aspirin” and “your best defence.” The page highlights a U.S. study that found “zero HIV infections among 600 men who were on PrEP for 2 ½ years.” Even if you use condoms, the site says, PrEP “gives you extra protection from those ‘oops’ moments, and peace of mind.”

The takeaway seems to be that PrEP is not only effective, but the safe and socially responsible choice for a typical gay male like Scott, who uses condoms but has sex with different guys on a regular basis.

You’ll see a similar message should you decide to Google PrEP in Vancouver. The site GETPrEPED.ca, funded by B.C. HIV-AIDS agencies, emphasizes: “For most of us, PrEP has one very common side effect: peace of mind!” Some guys, it says, use it “as much an anti-anxiety medication as it is a HIV prevention one!”

Amid all the buzz, Scott started to ponder starting PrEP. Then he found out it costs $29 per day, and must be taken daily, adding up to more than $10,000 per year. He doubted his drug plan would cover it.

In the future, that might not matter. Earlier this month, the U.S. Food and Drug Administration approved a generic version of the drug, which is expected to be much cheaper than the brand-name version; if Health Canada also approves it, provincial governments will face pressure to provide PrEP for free, just as Scotland has recently done.

But while studies have shown that PrEP can be effective in preventing HIV in high-risk individuals, the drug may not be as safe and socially responsible as some ads make it seem. As PrEP begins to become a common consideration in the lives of gay men, governments and men like Scott need to think hard about whether the benefits of widespread prescribing are really worth the risks. 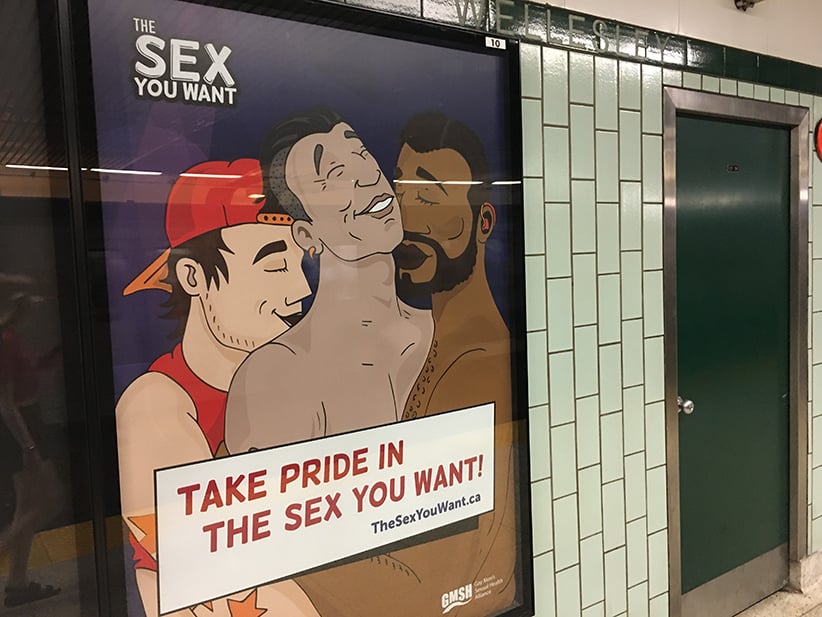 An ad for a site funded by the government of Ontario offering education on PrEP, taken at Toronto’s Wellesley station. (Josh Dehaas)

Dr. David Knox, who practices in Toronto’s gay village, has prescribed PrEP to dozens of men, who either pay out of pocket or have private health insurance. He supports widespread access and isn’t shy about recommending it. For example, he says would counsel someone like Scott, who usually—but not always—uses condoms, to consider PrEP.

But do they really need it, considering the risk per sex act? According to a reference guide from St. Michael’s Hospital, the risk of an HIV-negative person who is the “receptive” partner in condom-less anal intercourse with an HIV-positive person contracting HIV is an estimated 1 in 72 (1.38 per cent); about 1 in 909 people are at risk if an HIV-negative person not using a condom is the “insertive” partner with someone who has HIV, a 0.11 per cent chance. Oral sex risks are much, much lower; using latex condoms consistently and correctly reduces that risk even further. Add it up, and a man who uses condoms most of the time or sticks to oral sex is extremely unlikely to get HIV, and unlikely to need PrEP.

Knox says he also prescribes it to some patients who use condoms but “have grown up absolutely terrified of having sex because it’s been drilled into our brains that you can get HIV.” He’s not alone: Anxiety around sex is a common reason people give for using PrEP. For example, Murat, a 32-year-old computer scientist from Michigan, says he hasn’t had sex recently and uses condoms, but started taking PrEP a month ago just for “peace of mind” should he meet someone. His employer drug plan covers most of the cost, so he figured: why not?

Knox says that “even if the PrEP really just acts as like an anti-anxiety medication in a low-risk individual, allowing them to have sex and enjoy it … that’s worth something.”

Maybe. The question is whether it’s worth the potential side effects, and other societal consequences.

One of the biggest concerns about PrEP is that it emboldens men to ditch condoms. While HIV-AIDS service agencies recommend using condoms while on PrEP, it’s widely understood in the gay community that many men use PrEP specifically so they don’t have to rubber up. To use the words of Ontario’s HIV-AIDS service agencies, they take PrEP so they can have “the sex they want.”

But ditching condoms means other sexually transmitted infections will spread quicker. Dr. Rita Shahin, from Toronto Public Health, says she supports public access to PrEP, but the possibility of increased STIs remains a concern. She points to a 2015 study published in the New England Journal of Medicine that found that 41 per cent of patients who got PrEP later tested positive for another STI, compared to 33 per cent of those in the control group.

These extra STIs cost the health system, and they’re getting harder to treat. For example, 30 per cent of new cases of gonorrhea in the U.S. are now resistant to at least one antibiotic. The U.S. Centers for Disease Control and Prevention calls this an “urgent threat.”

Shahin says gonorrhea—which is on the rise—is now so resistant to oral medications in Toronto so patients now need a “painful injection.”

“We haven’t seen resistance to the injectible medication in Toronto yet,” she says, “but if we do that will be a concern, because I think we’re running out of treatments for it.”

The questions around resistance aren’t limited to the unpleasant but non-life-threatening STIs like gonorrhea. Some strains of HIV are already resistant to the drug in PrEP, which means that it doesn’t always work, and studies are looking into the possibility that giving PrEP to those who may not use it correctly might actually speed up resistance to this first-line treatment.

In fact, it was Knox who reported the first known patient in the world to have acquired a multi-drug-resistant strain of HIV despite taking PrEP, a man from Toronto who adhered to the drug religiously. He knows of two other documented cases of men acquiring HIV while taking PrEP properly, he says, though that’s out of what he assumes are tens of thousands of gay men on PrEP worldwide. Knox emphasizes that relatively small number needs to be weighed against the unknown number of cases of HIV that were prevented, and he remains a big supporter.

But some researchers are looking into the question of whether handing PrEP to large numbers of HIV-negative people—who will sometimes forget to take it—might speed up resistance to this first-line treatment, just as we’ve seen with antibiotics. Could a generation of men on PrEP end up destroying our best treatment we have? While neither Knox nor Shahin is particularly concerned about widespread resistance, it’s not something they completely dismiss. And one gay Toronto-based doctor who spoke to Maclean’s but wanted to remain anonymous, said these resistance fears are one reason he does not take PrEP, and is hesitant to prescribe it.

That doctor is also concerned about side effects, including those that may take many years to reveal themselves. Potential side effects, after all, sometimes get glossed over online; for example, that Toronto pharmacy FAQ calls PrEP “as safe as Aspirin.” What it doesn’t say is that this conclusion was based on a study that compared PrEP’s side effects with side effects of adults who take Aspirin daily to ward off cardiovascular risks. Aspirin has side effects and so does PrEP; they range from mild ones like nausea and headaches to potentially more serious ones like kidney dysfunction and changes to bone density.

One man who spoke to Maclean’s but declined to be named said he took PrEP despite the fact that he uses condoms “99 per cent of the time,” mainly so that he could know what the experience is like for when he volunteers at nightclubs to educate men about sexual health. Several months after starting PrEP, he says he had lost a significant amount of weight, felt tired and kept being told by family and friends that he looked sick. About 10 months after he started, he says his doctor found abnormal kidney function and recommended that he stop taking it. Several months after he stopped, his weight is back where it was and feels normal again. He says every man needs to make his own decision about whether PrEP is worth the risks, but the apparent side effects weren’t pleasant—and those are the ones he knows about.

Knox says he discusses the possible side effects with patients, and that 80 per cent take it anyway. But medication’s true side effects can take years to become clear.

There are also other options. One is Post-Exposure Prophylaxis (PEP). Studies have shown that PEP—which is PrEP, plus a second HIV drug—can reduce the risk of acquiring HIV by more than 80 per cent if a 28-day course is started within 72 hours. It’s handed out for free at local hospital emergency rooms.

Scott doesn’t even know about PEP. He’s seen no ads for that in the subway.

As for PrEP, he’s done some research and decided that even if his drug plan did cover it or the government handed it out for free, he’d rather stick with his current strategy: using condoms, limiting the number of partners, and getting tested every few months.

“Taking a pill every day that has potential side effects, that you have to commit for a long period of time, just to be sexually promiscuous?” he says. “I just don’t see the trade-off.”

Read a letter to the editor responding to this piece.