Eco-buildings may be good for the planet—but what about occupants?

Virtuous they are, but eco-certified 'green' buildings can be terrible for your health 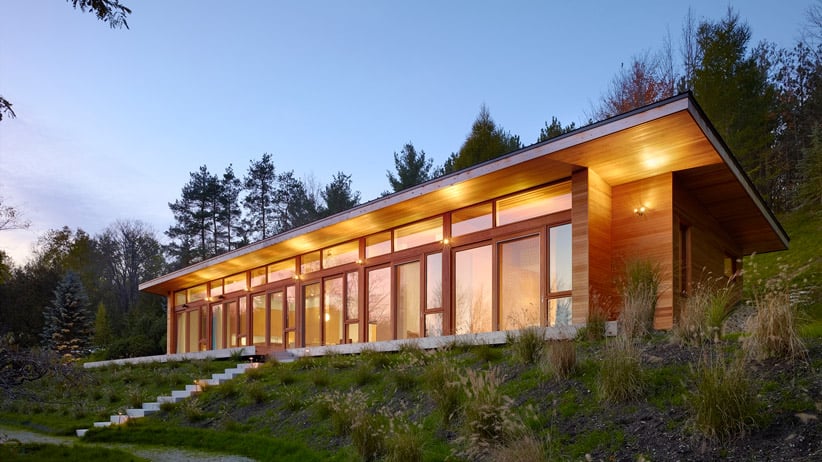 When Toronto’s Superkül architecture firm was asked to build a sleek modernist house in Mulmur, Ont., the designers used a decidedly unscientific method to select the materials. They asked the client to handle and sniff one building product after another, as they watched for adverse reactions. Sometimes all it took was pulling an item out of its box, says Andre D’Elia, a principal at the firm. Most of the no-nos involved recycled content; first-generation materials worked best. The firm’s +House is green, aiming for Leadership in Energy and Environmental Design (LEED) gold certification. But it goes further to ensure health for its environmentally sensitive client.

While clever marketing has associated green buildings with health in the public imagination, some environmental standards, such as LEED, have come under attack for being lax on air quality. A hundred years ago, buildings were forgivingly full of air holes. “You could have the cat die in the basement and no one might notice,” says Stephen Collette, a building biologist in Lakefield, Ont. Buildings have become more energy efficient—which, in the midst of a climate crisis, most agree is a good thing. But they have also become increasingly airtight, which can exacerbate air quality problems, says Collette. “A green building must be healthy for the occupants, not just healthy for the planet,” says Tang Lee, professor of architecture at the University of Calgary.

Some demur, saying this could only be the case in buildings that pay lip service to being green. Truly green buildings must be holistically designed, says Seattle’s Jason F. McLennan, creator of the rigorous green standard Living Building Challenge (LBC). They must take into account issues including material toxicity, mould and moisture migration, outdoor air quality at any given time, indoor air quality, and ventilation rates, he says. But most green buildings today are not designed or built to such exacting standards.

The first airtight buildings were mould factories. The invention of the heat recovery ventilator (HRV) helped by allowing stale indoor air to be exchanged for fresh outdoor air with little energy waste. But an estimated half of all HRVs are improperly installed and many more aren’t correctly operated or maintained. “Many occupants have no idea how the HRV works,” says Collette.

For +House, Superkül used age-old passive ventilation techniques—also known as windows and skylights—to ensure the building would breathe. With these open, “it feels like you’re outside,” says D’Elia. The house also uses hospital-grade air filters along with HRVs in cold weather. But the air quality challenges in many buildings may be beyond what any HRV can handle. Building products have become increasingly toxic over the last 50 years. Today’s buildings may contain as many as 360 different chemicals, emanating from carpets, cleaning products, photocopiers and printers—a problem only partly addressed by mechanical ventilation. “If you have a skunk in the house, do you open a window or do you get rid of the skunk?” asks Collette.

The first green standard to call attention to materials toxicity was McLennan’s. Since its launch in 2006, all 14 “worst-in-class” chemicals on its redlist have been banned from fully certified projects. These include asbestos, lead and mercury, but also pthalates, used in plastics and vinyl, and flame retardants, used in electronics, furniture and textiles. But only five buildings worldwide have achieved full LBC certification to date.

Other more mainstream green standards are now jumping on the bandwagon. The newest version of the LEED standard, with more than 1,700 buildings certified in Canada, awards points for choosing materials bearing health product declaration labels. But these points aren’t mandatory, so it’s still possible for a building containing toxic materials to achieve platinum, the highest LEED certification.

Superkül’s unorthodox methods for keeping toxins out of +House got their biggest test on the client’s move-in day. “She said she loved it, and she didn’t feel anything,” says D’Elia. Mission accomplished.