Facing the opioid crisis, an establishment doctor heads to the streets 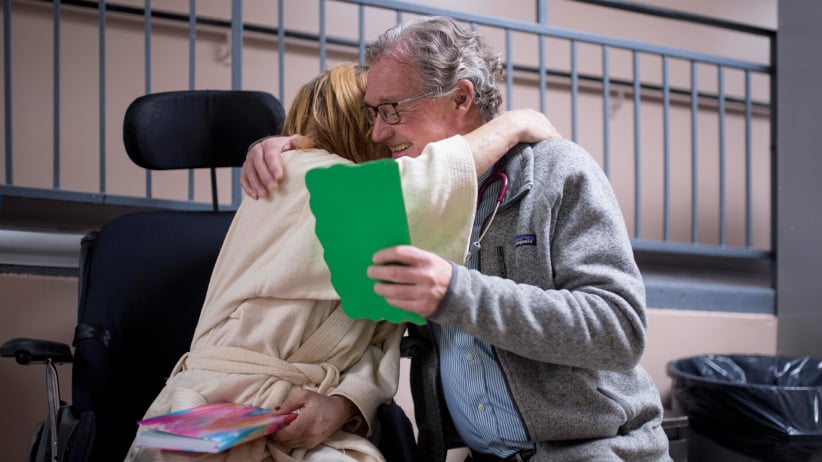 Dr. Jeff Turnbull gets a hug from Shelley, a client, after she gave him a Christmas card, at the Temporary Enhanced Shelter Program at the Shepherds of Good Hope in Ottawa’s Lowertown neighbourhood, Thursday, Dec. 14, 2017. (Photograph by Justin Tang)

At 9:30 a.m. on a bitingly cold early-winter morning, Jeffrey Turnbull is preparing to head out on rounds. From a second-floor window in the ramshackle ofﬁces of Ottawa Inner City Health, the Peace Tower is visible in the distance, but Turnbull gestures out over the nearer, nondescript rooftops of Lowertown, describing the long-established homeless shelters there—and the new supervised injection clinic—that he’s about to visit.

A few minutes later, he’s parking his SUV outside the Shepherds of Good Hope, a shelter and soup kitchen, leading a small team that includes a mental health nurse into what they just call “the trailer.” It’s a former construction trailer set up recently behind “the Sheps,” ﬁtted out as a cramped but orderly space where drug addicts can inject themselves with health care workers standing by.

Even on this weekday morning, it’s busy. About 130 addicts used the trailer the previous day. Turnbull has a brief meeting with staff there, then strides next door to a clinic for homeless women. He’s quickly pulled into an examination room for an urgent consultation about a 31-year-old addict, Alison, whose injection drug use has led to a bacterial infection in her heart.

READ: How Ontario is failing to help stop opioid deaths

She needs to get off heroin long enough to allow for valve surgery. Turnbull and his colleagues sort out a tentative plan to get her into a program to ease her away from street drugs. Alison seems only vaguely interested. At the ﬁrst chance, she hurries back out into the cold. Turnbull also seems eager to keep moving. “It’s invigorating,” he says later about working with addicts. “It doesn’t tire me out.”

In fact, Turnbull is signing up for a lot more of it. At 66, he ranks among Canada’s elite doctors—an internal medicine specialist, past president of the Canadian Medical Association and chief of staff at the sprawling Ottawa Hospital. But last spring, he told the hospital he’s stepping away from that job, which paid him more than $500,000 a year, to work full-time at street level. “This is where the real need is,” he says. “It’s been driven mostly by the opioid crisis.”

WATCH: Theft and loss of Opioids from hospitals on the rise in Ontario

Turnbull’s decision didn’t come out of the blue. His career has followed two paths—prestige work at the city, provincial and national levels, and helping the homeless at Ottawa Inner City Health (OICH), which he helped found in 2001. Its innovative program for alcoholics—managing their addiction by giving them wine by the cup—has been widely studied and copied. “It’s a matter of minimizing the harm, stabilizing their environment, trying to unravel that complex series of events that brought them here, then moving them into abstinence if that’s possible,” he says.

But long experience with alcohol—and crack cocaine, and other drugs—didn’t prepare Turnbull and his colleagues for fentanyl. The deadly opioid reached Ottawa last spring, and the overdose death toll spiked. Of the roughly 250 homeless patients OICH might be treating at any given time, he says only a few would have been heroin addicts until recently. Now, 50 to 70 are addicted to heroin, which frequently means using “purple heroin,” the sort laced with fentanyl. Some weeks, several die. Many overdose and—if they’re lucky—are saved by health workers with antidote kits. Theresa Tam, Canada’s chief public health ofﬁcer, recently estimated opioid-related overdose deaths might exceed 4,000 in Canada in 2017, about twice the likely death toll from car accidents (the official count is not yet available).

Yet, out on rounds, Turnbull and his team stay upbeat. They laugh a lot. So do their patients, except those too sick or hung over or jittery. There are touching moments, like when an older woman taking refuge at a shelter hands Turnbull a Christmas card she’s made for him of red and green construction paper. So the ﬁrst words of Turnbull’s answer, when he’s asked what he would tell Canadians who despair about the opioid epidemic, are jarring. “I despair as well,” he admits, then quickly adds: “On the other hand, we have enormous resources and this is a societal problem that needs to be addressed.”

He talks of bringing together health care providers, police and the courts. On the hot-button issue of the trailer, Turnbull says he understands those who recoil at providing a place for addicts to “inject poison.” But the alternative, he says, is more addicts dying “in stairwells and up against chain-link fences.”

Turnbull lives on a farm in Wakefield, Que., not far from Ottawa, where he has horses and chickens and a donkey. His explanation about what motivates him is hardly original, but rings true anyway. “There’s the sense that you’ve been pretty lucky, and there are people around you who aren’t that lucky,” he says. That dividing line has always existed, of course. What’s different now is that, for those who fall on the wrong side, fentanyl is waiting. “These are not stupid people,” Turnbull says. “They know they can’t do this much longer. Think of the power of that addiction.”