Once vaccines are in Canada, they could be deployed within days 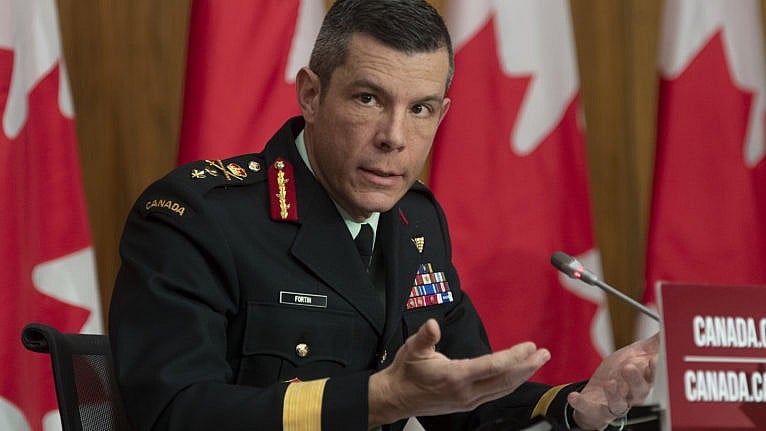 Major General Dany Fortin responds to a question during a news conference in Ottawa, Monday, Dec. 7, 2020. THE CANADIAN PRESS/Adrian Wyld

“Vaccines are coming,” Prime Minister Justin Trudeau said on Monday. Canada has secured an agreement with Pfizer to receive an early delivery of 249,000 doses of its vaccine, enough for 124,500 Canadians. “Pending approval from Health Canada, the first shipment of doses is tracking for delivery next week,” Trudeau said, “The great news is that this is a beginning.” Those first doses will arrive in a series of shipments, not all at once.

Last month, the National Advisory Committee on Immunization (NACI) issued its preliminary guidance on who will receive the initial doses of COVID-19 vaccine. NACI has identified key populations as first priorities, led by those “at high risk of severe illness and death from COVID-19”:

While the federal government has issued detailed guidelines as to the order in which vaccines should be handed out, it’s up to the provinces to “to adjust and implement them in ways that [are]suitable for their populations,” Trudeau said. For example, Ontario’s vaccine priority list, which syncs with the one recommended by NACI, will also “be prioritizing the rollout of the vaccine in regions with the highest rates of COVID-19 infection.” On Monday, Newfoundland and Labrador Premier Andrew Furey announced that 1,950 of those first 249,000 doses will be distributed from the Health Sciences Centre in St. John’s.

In the first quarter of 2021, Canada is expected to receive six million doses of several vaccines, including ones from Moderna and Pfizer/BioNTech, with more doses from those manufacturers as well as other pharmaceutical firms coming after that, pending regulatory approval. The federal government has “a diverse portfolio” of advance-purchase agreements, Trudeau explained, in part because “they have never been made at this scale or speed before.” If one firm runs into manufacturing challenges, Canada has alternatives lined up. As of Dec. 7, the government has signed agreements with seven firms working on COVID-19 vaccine candidates. (The Maclean’s COVID-19 vaccine tracker is keeping tabs on trials, approvals and pre-orders.)

“It is the largest mobilization of vaccines in Canada’s history,” Trudeau says. The rollout of so many different vaccines (up to seven, if all are approved), each with its own storage and handling requirements, and many requiring two doses, is a logistics challenge. “This is no small task, which is why we have a clear plan,” Trudeau said. As soon as the individual vaccines are approved by Health Canada, a logistics operation will deliver those precious vials to provinces and territories for distribution. Maj.-Gen. Dany Fortin, chief of staff of the joint operations command of the Canadian Armed Forces, will run that campaign as a vice-president at the Public Health Agency of Canada.

As of now, the federal government has 14 distribution points set up across the country (one per province except the four biggest provinces, which each get two) and is doing dry-runs this week to work out the kinks before the real distribution occurs. “The [empty] boxes are in the air right now [from Belgium],” Fortin said in a news conference on Monday. A shipping container filled with boxes, dry ice and a data-logger is being used to simulate a real shipment. Newfoundland’s Furey confirmed that two of those empty boxes would arrive in his province as part of the rehearsal. The dry run is crucial because Pfizer requires guarantees that the provinces are ready to handle the vaccines before the pharmaceutical giant hands them over to Canada, explained Anita Anand, Minister of Public Services and Procurement.

The need for such elaborate rehearsals is also a recognition that the first vaccine from Pfizer needs to be stored at -70 Celsius, which requires special shipping and storage containers. The federal government bought 126 freezers to store COVID-19 vaccines, including 26 ultra-low temperature freezers needed for the Pfizer vaccine. And, like most other vaccines expected to be approved early in 2021, the Pfizer vaccine is a two-dose vaccine, with the second jab coming three weeks after the first.

Fortin doesn’t believe there will be much delay between arrival and distribution, explaining that it should take a day or two to receive, unfreeze the vaccine, and decant and mix them into sizes ready to be used. Dr. Howard Njoo, deputy chief public health officer, said that the federal government has been working with the individual provinces, which each have their own priorities, but it may be practical at the very beginning to focus on urban areas, then broaden out deliveries as more doses arrive. Because of the difficulties in transporting and handling the Pfizer vaccine, “the [Northern] territories have indicated a preference to other vaccines” Fortin said on Monday.