The feds are even talking about criminal charges in future cases. But are they ready to crack down on drug promotion disguised as 'medical education'? 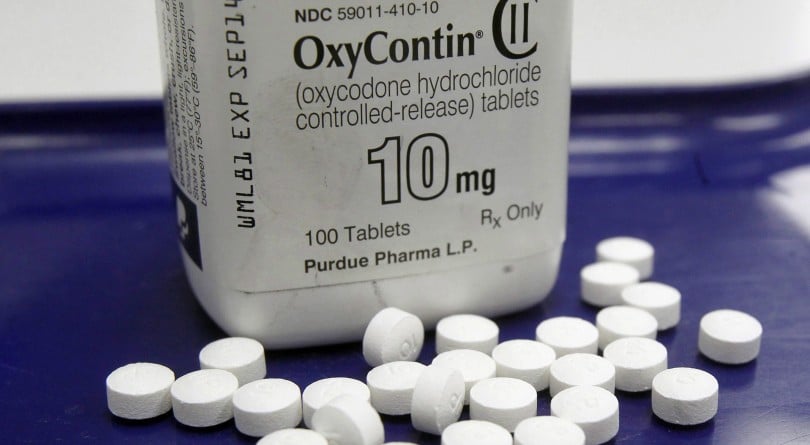 This Feb. 19, 2013 file photo shows OxyContin pills arranged for a photo at a pharmacy in Montpelier, Vt. The state of Montana is seeking a preliminary injunction to prevent the maker of the powerful painkiller OxyContin from marketing opioids to Montana prescribers, seeking to put the force of a court order behind Purdue Pharma's recent promise to end such marketing nationwide. (Toby Talbot/AP)

On Tuesday, the federal government issued the dire news that 4,000 Canadians died in 2017 from apparent opioid-related overdoses—and that opioid-related overdose is now the number one cause of death of Canadians aged 30 to 39. Another potentially cheerier headline was also issued by Minister of Health Ginette Petitpas Taylor: Health Canada would be finally undertaking a series of initiatives intended to deal with what the feds call a “national health crisis.”

The big takeaway was the potential new plan to “severely restrict marketing of opioids,” some five months after Purdue Pharma  announced it will stop advertising opioids to doctors in the U.S. and the same day the company laid off its entire sales team south of the border. Health Canada, the federal drug regulator, has been under pressure to launch a criminal investigation into Purdue Pharma’s marketing of Oxycontin in Canada, a country now the second highest per capita user of prescription painkillers in the world, behind the U.S. As this Maclean’s story outlines, marketing of opioids in Canada extends far beyond medical journal advertising; it’s enmeshed in medical education, with Purdue Pharma (Canada) supplying pain management textbooks and paying doctors to be speakers.

A criminal investigation into past marketing practices is clearly not in the cards. Instead, Health Canada has launched consultations open until July 18 to seek views on restricting most forms of marketing and advertising of prescription opioids in the future; it plans to introduce proposed regulations in early 2019.  The health minister also called on opioid manufacturers and distributors to immediately cease marketing activities associated with opioids in Canada “on a voluntary basis” until the new regulations are in place; letters were sent out to industry on Tuesday, a government official told media in a conference call.

A “dedicated marketing compliance and enforcement team” within Health Canada, backed by $5 million over five years, has also been created to “proactively monitor opioid marketing, enforce the existing rules around improper advertising, and take action where necessary, including recommending criminal charges where appropriate.” As well, the government is “exploring the development of new enforcement tools, including administrative fines that could be levied rapidly in the case of less serious violations.”

The actions come as deaths associated with opioids have risen 34 per cent from 2016; 2017 numbers are likely to rise as more data are collected. Seventeen Canadians were hospitalized per day on average for opioid-related overdoses, up from 16 per day in 2016. Two out of three suspected opioid-related overdoses (92 per cent of which are deemed accidental) occurred among men.

Data also showed prescription rates for opioids in Canada were down some 10 per cent between 2016 and 2017, the first decline since 2012. That said, the number of scripts written for opioids are stunning: 21.3 million in 2017.

Reaction to the government’s announcement among doctors, lawyers, and drug policy experts has been mixed.  It’s not enough, says physician Nav Persaud, an associate professor at University of  Toronto and drug safety researcher at Toronto’s St. Michael’s Hospital, who signed the April letter calling for a criminal investigation into opioid marketing: “First and most important, the federal government has not withdrawn any long-acting opioid even though their approval was followed by a public health catastrophe.” Nor has the federal government done anything to compensate victims, including family members of the more than 10,000 who died, he says. “Reporting the national opioid-related death rate is helpful, it is not exactly post-marketing surveillance of long-acting opioids,” Persaud points out. “Health Canada is supposed to monitor the safety of approved products. They have failed to do that and the consequences have been dire.” They also haven’t said advertising of opioids will end, he says: “They are just doing a consultation with many, including the pharmaceutical industry.”

Others express conditional optimism. “This is a very positive step,” says Matthew Herder, an associate professor of medicine and law, and the director of the Schulich School of Law’s Health Law Institute at Dalhousie University. “It’s a notice of intention to restrict marketing; it’s not a guarantee that they will, although that’s clearly the plan.” Herder sees a shift: “They’re saying ‘We don’t want to regulate by cooperation [with the industry]. That’s important. There’s a strong signal they’re willing to use all penalties at their disposal to enforce Canadian law, including criminal charges when situation warrants.” It’s still theoretical, Herder allows. “Until they bring a case, it remains to be seen if they have the capacity and will to do that.”

The announcement is also “only forward-looking,” which is a problem, Herder says: “There’s no indication the government is going to undertake enforcement against entities that have engaged in dubious marketing practices in the past. If they’re not looking at past activity, there’s a ceiling on its impact in the industry. It won’t matter until it feels like there’s a bona fide threat that ‘We will prosecute’.”

The regulator setting up a dedicated marketing and compliance team is good news, Herder says, though he points out $5 million over five years isn’t much money. “But it also underscores the absence of such a team to date,” he says. “And that’s a key part of the story of why we are where we are.” Drug regulation was originally very much about marketplace enforcement, Herder says. Over time, however, the regulator put more and more focus and resources into pre-market evaluation of drug safety and efficacy. As a result, the regulator’s focus is at now odds with the drug industry’s which spends twice as much on marketing drugs as it does on research and development.

Questions remain, Herder says. He points to a caveat noted in the government’s statement about seeking “views on restricting most forms of marketing and advertising;” Health Canada also suggests “the possibility of carefully tailored exemptions to allow for the continued sharing of helpful educational and scientific information.” A lot of marketing falls under the guise of medical education, Herder says. “If they do go toward restricting and banning marketing practices but create exceptions for some type of continuing education that’s where the rubber will hit the road—how well they define that, whether they scrutinize those exceptions. Trying to enforce could be a logistical nightmare: “If exceptions are made for medical education, you’re going to need people overseeing how continuing education occurs and attending talks.” And that would create a quagmire of problems.

As Herder sees it, the call for public consultation is a strategy to insulate stronger enforcement action against any challenges to the Charter of Rights and Freedoms.”The Charter’s protection of freedom of expression extends to commercial speech. They’re worried a flat out ban on marketing of prescription drugs is going to motivate a challenge.”

“A good first step” is how physician Joel Lexchin, professor emeritus of health policy and management at York University, views the government announcement. “But it’s really unfortunate that it has taken the death of thousands of Canadians for the government to finally realize that drug marketing by pharmaceutial companies has a profoundly negative effect on the way doctors prescribe medications,” he adds.

Restricting opioid marketing is only a first step, says Lexchin, also an associate professor of family and community medicine at the University of Toronto. “Opioids are not the only class of drugs that cause significant harms to Canadians; a lot of the marketing of antipsychotics has driven up use significantly. And we can’t forget Vioxx, which was marketed intensely.” He wants rules for drug promotion, currently overseen by industry groups, overhauled to be regulated by an independent third party comprised of people who are non-conflicted, he says. Penalties must be stringent and meaningful to the industry, he says, adding there must be the prospect of  jail time for drug company executives who violate the rules.

Lexchin agrees with Herder that the caveat of “helpful educational information” needs to be watched carefully: “It can be interpreted many ways,” he says. “Companies will say medical education events they sponsor are meant to educate, not influence prescribing; it could also be interpreted as allowing companies to distribute biased journal articles about opioids.

He also expects considerable industry blowback to a potential plan to curb opioid marketing, including from doctors paid by opioid manufacturers to speak as well as patient organizations funded by companies that make pain medications. One criticism will be that patients will being denied access to necessary drugs, he says.

As for whether industry will comply with the request to voluntarily cease marketing, it’s too early to tell. As of Wednesday morning, Purdue Pharma (Canada) had not received any correspondence from the government, company spokesman Walter Robinson told Maclean’s. The company did issue a statement that in part noted it “has always marketed its products in line with the Health Canada approved product monograph and in compliance with all relevant rules, regulations and codes, including the Food and Drugs Act and the Pharmaceutical Advertising Advisory Board (PAAB) Code.”

The question now, and what Canadians should look to, is whether Health Canada will actually upend any of these “relevant rules, regulations and codes” in the manner Tuesday’s headline-grabbing announcement suggests.