Diaries show the disastrous extent of the 'Anne of Green Gables' author’s addiction to prescription drugs, as well as parallels to our modern-day opioid crisis 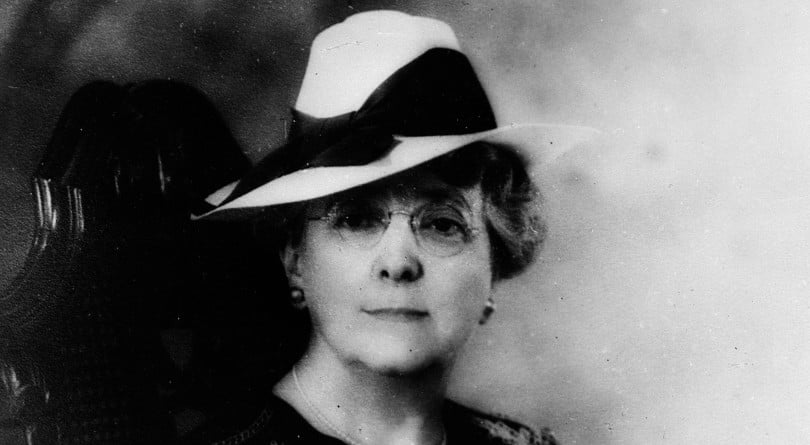 Even now, the red-brick house in Norval, Ont., is a majestic manse, just a stone’s throw from the imposing spire of the Presbyterian church where Ewan Macdonald preached on Sundays nearly a century ago. In the church sanctuary hangs a large plaque affectionately commemorating Macdonald and his celebrated wife, the author Lucy Maud Montgomery, who wrote the Anne of Green Gables novels.

But the handsome house in this idyllic setting just north of Toronto has long held a secret. Macdonald and Montgomery were heavy consumers of barbiturates and bromides, prescribed by doctors for anxiety, nerves and insomnia. Montgomery wrote copiously in her diaries of the medications they took, and the spiralling physical and mental deterioration that accompanied their drug use. Montgomery died in 1942 of what her family says was suicide by overdose. (No autopsy was done.) She was 67.

“They would take barbiturates . . . and keep increasing the dose and when they quit working, they’d add a spoonful of bromides and then when that didn’t work very well, [Montgomery] carried the standard medicine for the time in her purse, which was brandy, and then you’d have a swig of that,” says Mary Henley Rubio, professor emerita of literature at the University of Guelph. Her 2008 Montgomery biography, based on three decades of research, explored the extent of the couple’s drug use for the first time.

Their harrowing story has new resonance with disturbing parallels to today’s opioid epidemic. Both involve patients unwittingly hooked on highly addictive drugs meted out by doctors who failed to recognize the dangers. And it’s particularly relevant to Canadians, not only because Montgomery is such a beloved icon, but also because Canadians are among the world’s highest consumers of opioids. In 2017, for example, Canadians’ use of oxycodone, one of the main culprits in prescription-drug overdose deaths, was second only to that of Americans, measured by tonnage, according to the International Narcotics Control Board. 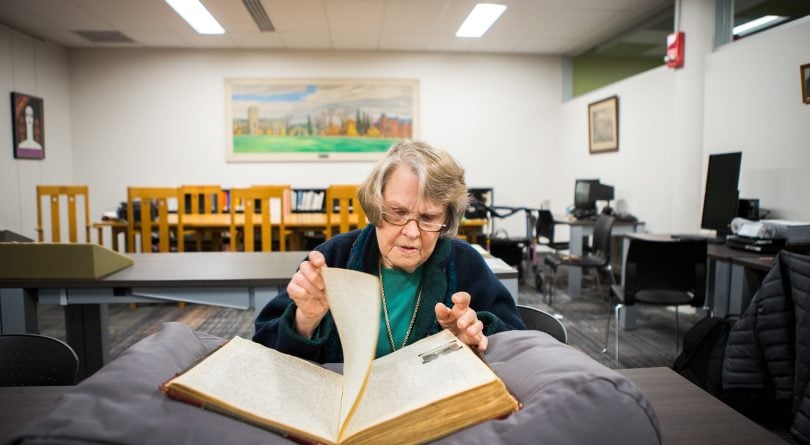 Mary Rubio, professor emeritus at University of Guelph flips through a personal journal of Lucy Maud Montgomery at the McLaughlin Library in Guelph. (Photograph by Chris Donovan)

Montgomery’s granddaughter, Kate Macdonald Butler, says the family knew of the author’s drug consumption but rarely discussed it. “She was definitely over-medicated,” Butler says. Butler believes it’s important to learn from Montgomery’s ghastly experience. And so does Elizabeth Epperly, founder of the L.M. Montgomery Institute at the University of Prince Edward Island and the university’s former president.

“The brightest can also be tarnished by prescription drugs and their misuse, through no fault of their own,” Epperly says, adding: “She saw herself as a healer of people’s spirits and sorrows, and how fitting that her darkest hours and deepest pain could also possibly bring hope to others.”

Here in Norval, for example, where Montgomery lived from 1926 until her husband retired in 1935, Montgomery writes that he was sometimes so befuddled she had to give him a shot of homemade wine before he could stumble across the yard to deliver his sermon. Sometimes psychotic and suicidal, he had one of several serious breakdowns while in Norval, each accompanied by heavy use of prescription medications, according to Rubio’s tally from the diaries.

Montgomery describes a disastrous road trip in 1937, after the couple moved to Toronto. Macdonald, tapped to give a sermon at his former church in Leaskdale, Ont., is so confused he can’t figure out which roads to take. His hands shake so violently he can’t keep a cup at his lips. He is too dazed to read his sermon, simply babbling at the pulpit before sitting down. When they get home, his doctor prescribes yet more bromides to deal with his “complete nervous prostration.”

As for Montgomery, she records her own increasing use of a laundry list of barbiturates and bromides. Her husband shops tirelessly for more prescriptions from new doctors. Their bedroom nightstand and bathroom cabinet are stacked with medications. She writes that she fears she is turning into another person. She staggers, has hallucinations and dreadful nightmares, rapidly loses weight.

At one point her son Stuart Macdonald—a doctor, and Butler’s father—was so worried about her behaviour that he took a sample of her blood, he told Rubio. It was laced with bromides and he begged his mother to stop taking them. She didn’t. Toward the end of her life, Montgomery wrote that she couldn’t work unless she had a “hypo” (hypodermic injection) of one of the drugs. On the final afternoon of her life, she packaged up her last manuscript, sent it to her publisher, went to bed and died. To her many fans, it’s a heartbreaking picture.

Looked at through the lens of modern knowledge, specialists see a couple in the grip of prescription drug dependence.“To me it sounds like a case study for barbiturate addiction,” says Sarah Konefal, a researcher and policy analyst at the Canadian Centre on Substance Use and Addiction in Ottawa.

Barbiturates transformed the treatment of mental health when they became available in 1903, says Edward Shorter, a professor of psychiatry who holds the history of medicine chair at the University of Toronto. Once on the market, they took off, long before doctors understood that they are addictive, with a paper-thin margin between a helpful dose and a lethal one.“Barbiturates were as common as grass,” says Shorter, author of the 2009 book Before Prozac: The Troubled History of Mood Disorders in Psychiatry.

Montgomery was far from alone in her prescription drug use. By the late 1940s, a few years after her death, concern over widespread barbiturate consumption in the U.S. prompted the first clinical study there of “chronic barbiturate intoxication.” Published in 1950 in Archives of Neurology and Psychiatry, the study says barbiturates were responsible for a quarter of all acute poisonings of people admitted to hospital in the U.S. and the leading cause of death by poison, whether deliberate or accidental. The study catalogues the effects of overuse, a list eerily similar to what Macdonald and Montgomery experienced: confusion, tremors, emotional instability, delusions, depression. “Barbiturates are addictive in every sense of the word,” the study concluded. “Prolonged use causes great harm to the user and to society.”

Introduced in the mid-19th century, bromides, like barbiturates, depress the central nervous system, slowing down how information is processed in the brain, explains Vivienne Luk, a forensic toxicologist and chemist at the University of Toronto. Physicians didn’t understand their ill effects for the first several decades. Symptoms of overuse can include changes in personality, hallucinations and delusions.

In the late 1990s, the trend to prescribe opioid pain relievers, such as oxycodone, began in earnest. Pharmaceutical companies and even medical schools assured doctors that the drugs were not addictive, particularly if they were in pill form, says Karen Woodall, a professor of forensic toxicology at the University of Toronto. “Before people started to realize opioids were addictive, we were already in a crisis.”

Now, some patients dependent on the drugs seek out new places to find prescriptions to cope with their pain, a practice that government regulation is trying to curb. Many walk-in clinics in Canada now refuse to prescribe opioids, for example. When they can’t get prescriptions, some are deliberately injuring themselves and showing up at emergency rooms. Others turn to illicit sources of drugs, often contaminated with highly lethal fentanyl.

Since 2016 alone, nearly 14,000 Canadians have died from opioid overdoses—both from prescription and street drugs. Canada’s chief public health officer, Theresa Tam, has called it the most significant public health crisis the country has seen in decades. Statistics Canada reports that life expectancy here has stalled because there are so many accidental opioid poisoning deaths. Five provinces have banded together in a class action suit against drug manufacturers, saying they promoted opioids despite their risks.

Some things have changed in the decades since Montgomery’s death. Many medications are safer today than the barbiturates and bromides Montgomery and Macdonald used, Woodall says. Talking about mental health issues is more socially acceptable now. But none of those advances forestalled the epidemic of opioid deaths.

“It makes two steps forward and one step back,” Woodall says. “The opioid crisis happened even with physicians being more aware and with more safety measures in place for medications that are prescribed.”

Rubio, the biographer who pieced together the puzzle of Montgomery’s drug consumption, hopes the story will help others. She is here in Norval at a caretaker’s cottage next to the manse, munching on banana bread, deep in plans to open a museum in Montgomery’s former home. A chevron of Canada geese honks in flight outside, soaring in a brilliant blue sky above the peaceful Credit River. Montgomery loved this place, writing five novels here while silently coping with her own mental health issues.

All of that, including the fallout from the plethora of drugs doctors prescribed to help, will be on display once the museum opens in 2024, the sesquicentennial of her birth. Rubio calls it a cautionary tale about how mercilessly the side effects of drugs can ravage anyone’s life.

“It’s of historical importance,” Rubio says. “It’s a warning for the future.”

This article appears in print in the March 2020 issue of Maclean’s magazine with the headline, “Lucy Maud Montgomery’s secret.” Subscribe to the monthly print magazine here.