I began my ER nursing career in Ontario. Burnout and low pay led me to leave for the U.S.

"It felt like the message in Ontario was that by virtue of being nurses, this is the sort of treatment we signed up for." 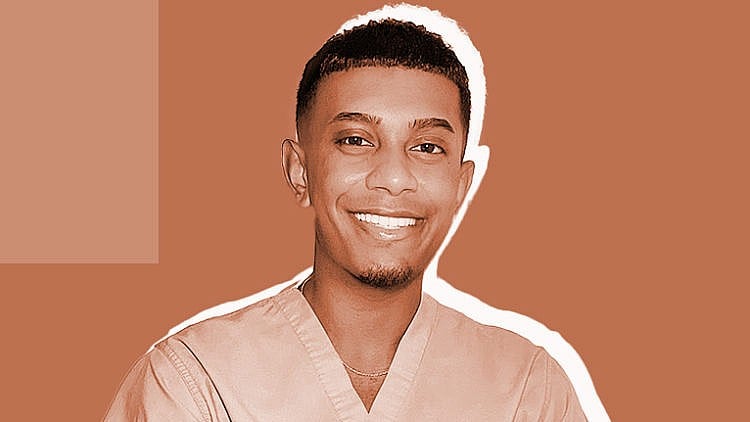 "If I could sit down with a member of the Ford government, I would tell them to wake up."

Perry Bhaskaran started his career as an emergency room nurse in his hometown of Scarborough, Ontario, in 2019—the same year Ontario’s Ford government passed Bill 124, which capped annual salary increases for public-sector nurses and other care workers at one per cent. Bhaskaran initially had no plans to leave the province, but when the pandemic corroded his working conditions and unhappy co-workers left the field in droves, he moved to Houston to continue his nursing career. Here, Bhaskaran opens up about the discouraging landscape for Canada’s nurses, and why repealing Bill 124 is crucial to keep our health-care system from collapsing.

Working in a hospital often means you’re dealing with people having the worst day of their life. Helping those people is exactly what attracted me to the field.

I’ve never wavered in my desire to become an RN. I graduated from Ryerson (now TMU) in June of 2019, and spent nearly a year in the ER at Scarborough General before transferring to Markham Stouffville, the following April, shortly after the pandemic began. The team at Markham Stouffville was amazing, with some of the friendliest, most supportive doctors and fellow nurses I’ve encountered. Sometimes, a hospital environment can be quite toxic for people at the outset of their career, but that was absolutely not the case.

Only six months into my nursing journey, I was welcomed with open arms. The team was so strong that for a time, I was blind to the negative aspects of the job—namely the poor pay and challenging conditions. But as COVID waves hit, I saw some of our strongest staff leave—leave the profession, the province or the country. In time, it became glaringly obvious that our province’s policies—which influence how hospital administration and management behave—signal a total lack of care and respect for health-care workers.

In 2019, the Ford government passed Bill 124, which is essentially wage-suppression legislation for health-care workers, ostensibly in the name of sustainability. It capped wage and benefits increases for nurses and other care professionals at one per cent. When you’re 21 years old, a starting pay rate of $33 per hour is amazing compared to other professions. But when you work for a few years and realize you’re only ever going to see a 60-cent per hour increase in your pay, it isn’t exactly motivating.

Meanwhile, my job got harder and harder as staffing shortages increased. We were supposed to have around 20 RNs working, yet we would regularly be short around seven RNs at any given time. That makes an enormous difference—especially when you’re missing senior staff in areas like critical care and resuscitation. A lot of our nurses would step up and work up to 16 hours—well past their designated 12-hour shift—with few or no breaks, just to help out the team. You can only keep that up for so long.

Our ER felt like a warzone. We had patients in hallway stretchers testing positive for COVID, and the triage line snaked around hallway corners. We had to go down the line asking, “Who is here with chest pain?” so we could figure out who we should prioritize. It was common to have two nurses for four trauma-bay rooms, nine monitoring critical acute rooms and psych rooms, and two to three nurses in a fast-track area with over 50 people. To be clear: that is not nearly enough, and far fewer than normal.

We were so busy that no one was able to eat, drink or have a break for a full 12-hour shift. It was heartbreaking to watch patients in critical condition come into a completely bed-blocked ER, then have to decide who was stable enough to give up their bed. It was a nightmare, and I was reaching the end of my rope.

MORE: I’ve only been a nurse for eight months. The chaos is killing me.

I wrote emails to the administration letting them know that morale was critically low. It was a cry for help, but nothing changed. We were called heroes, but our deteriorating working conditions remained the same.

The doctors who stepped in to fulfill nursing roles while we were critically understaffed earned hundreds of dollars in premiums. Meanwhile, the nurses who were being asked to work longer and harder than ever got nothing but overtime pay. The attitude from management felt to me like: We want more and more from you, but we’re not going to do anything else for you. It’s almost as if their message was that by virtue of being nurses, this is the sort of treatment we signed up for.

RELATED: How to fix our broken health-care system

I started forming an exit plan and applying to hospitals in the United States. Since I hadn’t been nursing for two full years yet, which is typically a requirement, I faced an uphill battle. But I was fortunate enough to connect to a woman through the website Indeed who in turn connected me to the HR department at Houston Methodist Hospital, which sponsors and brings over Canadian and other internationally educated nurses.

Last May, they offered me a position. To say my experience here has been a complete 180 would be an understatement. When I accepted the job, I received a $15,000 sign-on bonus, two $15,000 referral bonuses and $4,000 to help with relocation. All my visa expenses were paid for, and my employer even paid for a one-month hotel stay while I looked for an apartment.

Now I have a relationship with the chief nursing officer, Andrea, and her care and commitment are evident. It’s typical here for members of the administration to come down to the ER, get involved and see what’s happening on the ground—a stark difference from my Ontario experience. What’s more, I feel supported and heard. It honestly feels like a family. I was personally welcomed by the hospital CEO, and there’s even a shared governance structure: I have a voice in major changes that affect my job.

What is happening in Canada right now is shocking. There’s no reason clinics should be closing because they’re understaffed, or that people’s lives should be put at risk due to ER wait times. I don’t believe for a second that there isn’t enough money in our publicly funded system. There is—it just needs to be properly allocated. Otherwise, the health-care system will collapse.

If I could sit down with a member of the Ontario government, I would tell them to wake up. Listen to people working on the front lines and repeal Bill 124. This isn’t just about making nurses’ personal lives better. As nurses like me continue to leave the country to seek better conditions, communities will start feeling the pain. They already are.

—As told to Liza Agrba