One-third of vegetative patients may be conscious: study

Patients thought to be brain dead may be misdiagnosed 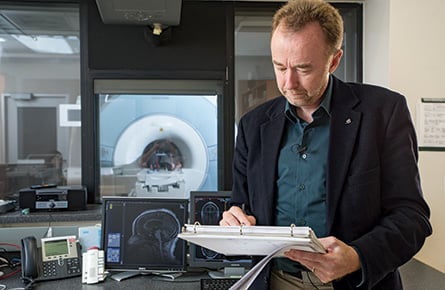 Imagine being confined to a bed, diagnosed as “vegetative“—the doctors think you’re completely unresponsive and unaware, but they’re wrong. As many as one-third of vegetative patients are misdiagnosed, according to a new study in The Lancet. Using brain imaging techniques, researchers found signs of minimal consciousness in 13 of 42 patients who were considered vegetative. “The consequences are huge,” lead author Dr. Steven Laureys, of the Coma Science Group at the Université de Liège, tells Maclean’s. “These patients have emotions; they may feel pain; studies have shown they have a better outcome [than vegetative patients]. Distinguishing between unconscious, and a little bit conscious, is very important.”

Detecting human consciousness following brain injury remains exceedingly difficult. Vegetative patients are typically diagnosed by a bedside clinical exam, and remain “neglected” in the health care system, Laureys says. Once diagnosed, “they might not be [re-examined] for years. Nobody questions whether or not there could be something more going on.” That’s about to change.

Laureys has collaborated previously with British neuroscientist Adrian Owen, based at Western University in London, Ont., who holds the Canada Excellence Research Chair in Cognitive Neuroscience and Imaging. (Owen’s work was featured in Maclean’s in October 2013.) Together they co-authored a now-famous paper in the journal Science, in 2006, in which a 23-year-old vegetative patient was instructed to either imagine playing tennis, or moving around her house. Using functional magnetic resonance imaging, or fMRI, they saw that the patient was activating two different parts of her brain, just like healthy volunteers did. Laureys and Owen also worked together on a 2010 follow-up study, in the New England Journal of Medicine, where the same technique was used to ask a patient to answer “yes” or “no” to various questions, presenting the stunning possibility that some vegetative patients might be able to communicate.

In the new Lancet paper, Laureys used two functional brain imaging techniques, fMRI and positron emission tomography (PET), to examine 126 patients with severe brain injury: 41 of them vegetative, four locked-in (a rare condition in which patients are fully conscious and aware, yet completely paralyzed from head-to-toe), and another 81 who were minimally conscious. After finding that 13 of 42 vegetative patients showed brain activity indicating minimal consciousness, they re-examined them a year later. By then, nine of the 13 had improved, and progressed into a minimally conscious state or higher.

The mounting evidence that some vegetative patients are conscious, even minimally so, carries ethical and legal implications. Just last year, Canada’s Supreme Court ruled that doctors couldn’t unilaterally pull the plug on Hassan Rasouli, a man in a vegetative state. This work raises the possibility that one day, some patients may be able to communicate through some kind of brain-machine interface, and maybe even weigh in on their own medical treatment. For now, doctors could make better use of functional brain imaging tests to diagnose these patients, Laureys believes. Kate Bainbridge, who was one of the first vegetative patients examined by Owen, was given a scan that showed her brain lighting up in response to images of her family. Her health later improved. “I can’t say how lucky I was to have the scan,” she said in an email to Maclean’s last year. “[It] really scares me to think what would have happened if I hadn’t had it.”