Thalidomide was a disaster. And it's available in Canada again.

The former 'wonder drug' led to miscarriages and babies with defects. Now it's being repurposed—for cancer treatments 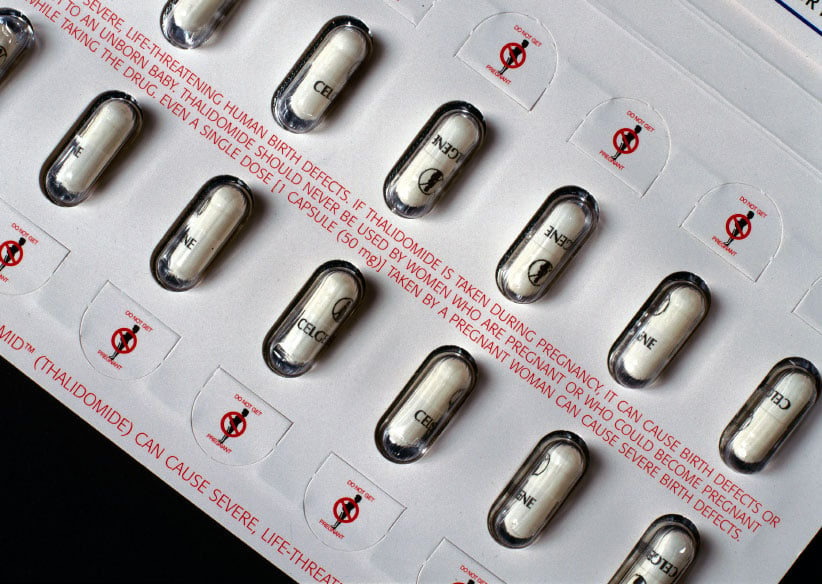 Made by The Distillers Co Ltd. Thalidomide was developed in West Germany in the mid-1950s and was initially used as a sedative and an antiemetic until the discovery that it caused severe foetal malformations. (Science & Society Picture Library/Getty Images)

More than 50 years ago, thalidomide was taken off the Canadian drug market for its horrific teratogenic—fetal abnormality-causing—effects. Hailed as a “wonder drug” that helped pregnant mothers deal with morning sickness, it led to miscarriages and stillborn babies. For the tens of thousands of people around the world who survived birth, the drug caused severe defects, chief among them phocomelia—underdeveloped or completely absent limbs. The now-infamous drug has led to millions of dollars in victim settlements in Canada and abroad.

So it might come as a surprise to learn that thalidomide is once again available. The drug has been repurposed in Canada, playing a fundamental role in how multiple myeloma, the world’s second most common blood cancer, is treated today. In January, lenalidomide—a thalidomide analogue that is just as teratogenic—was approved by Health Canada as a first-line treatment for multiple myeloma patients. Lenalidomide was first approved in Canada in 2008, but January’s announcement has further expanded the use of a drug that has become one of the most popular cancer treatments in the country.

MORE: What you don’t know about a leading morning-after drug

According to Dr. Rodger Tiedemann, a hematologist who treats myeloma at Toronto’s Princess Margaret’s Hospital, research into using thalidomide to treat myeloma began in the 1990s. He says researchers had observed angiogenesis—the formation of new blood vessels, which feed cancerous tumours—was a factor in the growth of myeloma, and thalidomide was known to have anti-angiogenic properties. “They decided to try some patients with thalidomide for myeloma, and lo and behold, those first patients had responses that were quite impressive and led to further study.”

Thalidomide was first tested on a number of different types of cancer. However, says Tiedemann, its anti-angiogenesis properties weren’t the actual reason the drug was effective. “That hypothesis of why it might work in myeloma has been totally debunked. It was tested in myeloma and it worked in myeloma, but in fact it didn’t really work in other cancers.” Since then, scientists have learned that another mechanism involving thalidomide is at play.

Multiple myeloma causes cancerous plasma cells to build up in the bone marrow. “In a normal, healthy bone marrow, there are very few plasma cells, maybe five per cent or something like that,” says Dr. Tom Kouroukis, a hematologist at Hamilton’s Juravinski Cancer Centre. “But when those plasma cells become cancerous . . . they start to grow and usually they’re 10 per cent or higher. For many people they’re like 30, 40, 50 per cent.”

Lenalidomide and thalidomide treat myeloma by attacking the bone marrow environment the cancerous plasma cells live in and making it inhospitable. “Any cancer cell has an innate quality of replicating and living on its own, but it’s also got to be in the right kind of environment,” Kouroukis says. “That’s where thalidomide is a good drug, because it not only kills the cells directly but it also makes the environment hostile.”

According to Myeloma Canada, seven Canadians are diagnosed with multiple myeloma every day, and more than 7,500 Canadians are living with the cancer. In 2016, the Canadian Cancer Society estimated that 2,700 Canadians would be diagnosed with the disease that year, and 1,450 would die from it. While it can be put into remission, myeloma is incurable and has a high likelihood of relapse, meaning the cancer will eventually return.

While lenalidomide and thalidomide are both available for myeloma treatment in Canada, lenalidomide has become the more widely used drug. In fact, Kouroukis says he has never prescribed thalidomide because lenalidomide, which is sold under the brand name Revlimid, is preferred in most cases. This is mainly due to side effects. Thalidomide is known to cause peripheral neuropathy—damaged peripheral nerves that can impair muscle movement, prevent normal sensation in arms and legs and cause pain and numbness—which is difficult for patients to manage over a long period of time. While lenalidomide has its own set of side effects—including suppressing blood counts—Tiedemann says it’s an easier drug for patients to take.

Multiple myeloma patients often have to go through chemotherapy and a stem cell transplant to treat their cancer. Revlimid is prescribed to patients after their transplant and initial treatment to maintain their remission, or to patients who have relapsed after a period of remission. With January’s announcement, patients who aren’t eligible for a stem cell transplant—mainly due to age—can now take Revlimid early on to delay the progression of the disease and reduce the risk of death. “Every myeloma patient will probably be treated with this drug at some point during their myeloma, be it front line or second line,” Tiedemann says.

The increasing popularity of Revlimid as a treatment is reflected in its price. Kouroukis says patients will show him bills in the range of $8,000 to $10,000 a month, depending on the dose they receive. Celgene, the New Jersey-based company that makes the drug, says that this year it expects to make at least US$8 billion in Revlimid net sales.

Around the world, drugs are repurposed all of the time—Viagra, for example, was originally tested as a way to lower blood pressure. Thalidomide, however, is unique in being repurposed after it was taken off the market. Health Canada program experts say they can’t remember any comparable scenario in the country’s history. As to lenalidomide’s teratogenic effects, Tiedemann says the medical community is mindful of the risks of giving it to pregnant women. “I believe from animal studies it’s expected that it would have similar effects if it was given to pregnant women, and indeed all the risk-management strategies are based on the possibility that it would have the same effects.”

There are just under 100 thalidomide victims living in Canada today. In May 2015, the Canadian government announced a $180-million funding package for the remaining survivors. Today, any patient who is prescribed thalidomide, lenalidomide or pomalidomide—a second thalidomide analogue—has to be registered through RevAid, a program to help patients understand the severe, life-threatening birth defects the drugs can cause. The registration form and program were created after consultation with the Thalidomide Victims Association of Canada (TVAC).

While the TVAC doesn’t completely oppose the use of thalidomide and its analogues for myeloma patients, it remains “very concerned that thalidomide appears to be becoming a drug of first choice again, instead of the drug of last resort that thalidomide victims believe it should be,” according to its website.

With January’s announcement, it appears that TVAC’s concerns are founded. Celgene forecasts that Revlimid sales will exceed $20 billion by 2020, while researchers are exploring the use of lenalidomide for Hodgkin’s and non-Hodgkin’s lymphoma and other cancers. Almost 55 years after it was taken off the Canadian market for all the pain and suffering it caused, thalidomide and its analogues have come back with a bullet.