The end of blood samples? 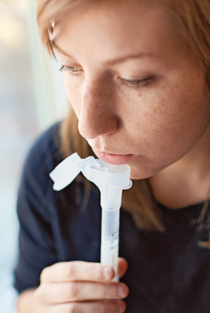 When Virginia Commonwealth University’s first-year students arrived on campus this fall, they received a seemingly bizarre invitation—to “Spit for Science.” A team of researchers at VCU, which is based in Richmond, is looking into whether genes might predispose some individuals to struggle with drug and alcohol use, or emotional problems. To accomplish this, they asked students to take part in a confidential survey: first they had to fill out an online questionnaire about their moods, their behaviour and relationships, and then provide a saliva sample, which is rich in DNA. These samples were collected with a unique device created by DNA Genotek, an Ottawa-based company that corners the market on high-tech spittoons.

As much as 70 per cent of the cells in saliva are white blood cells, which contain DNA, says company president Ian Curry. With this product, “you spit into a tube, and the device releases the DNA from inside the cells,” he says. It’s much less invasive than a blood sample, which makes it popular with scientists: instead of summoning study participants into a clinic to provide blood, health researchers can actually send out these devices by regular mail, have them provide a saliva sample, and then mail it back to the lab for testing. Unsurprisingly, Curry notes that participants in a lab study are much more likely to provide a saliva sample than blood.

“Spit for Science” is just one example of the many ways this sampler is being used. DNA Genotek (which was acquired by Pennsylvania-based OraSure Technologies in August) has thousands of clients around the world, according to Curry, and scientists are using the device to study everything from obesity to tropical disease. “Just two millilitres of saliva,” he says, “gives a researcher enough DNA to study for a decade.”