The end of Tim Hortons on hospital grounds?

The war on obesity is going to hospital cafeterias, in a movement that could mean more tofu and no treats for patients and their families 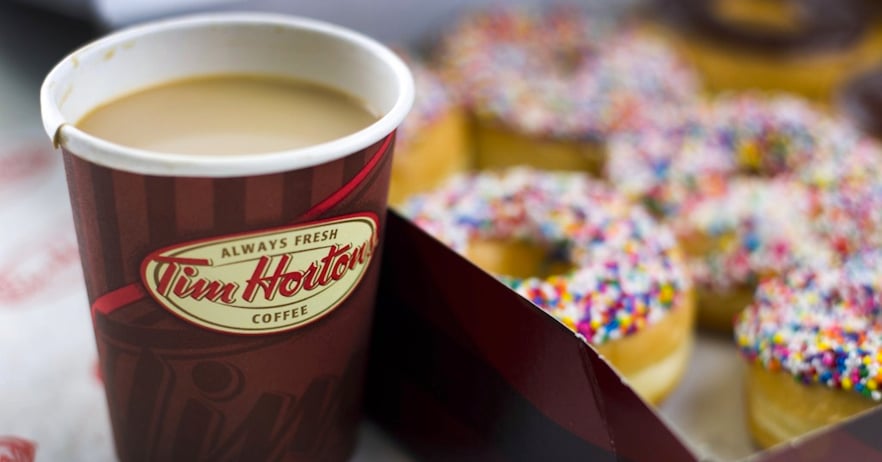 You know what they say about the healing power of hospital food… if it tasted better you’d never want to leave.

Food served in hospitals has long been the butt of jokes and complaints. Sensitive to these age-old grievances, many health care institutions have lately tried to improve the appeal of the hospital diet, both by upping the quality and variety of what their kitchens serve to patients, and by inviting name-brand restaurants to sell their wares in food courts. With greater choice has come more and better options—and, in many cases, grudging approval from health care consumers.

Now, however, some doctors want to make hospital food the next battle ground in the interminable war against obesity. Bans and restrictions may soon take the place of wide-ranging choice and taste. Say good bye to that double-double and doughnut pick-me-up in the hospital lobby. Or a ham sandwich for lunch. Instead, you may soon only be able to find doctor-prescribed whole wheat tofu bean sprout wraps and tap water.

Hospital food is about to get unappetizing again.

Last month the American Medical Association passed a resolution at its annual meeting calling for sweeping changes to the diversity of food available in hospitals for patients and visitors alike. These demands include a full prohibition on sugary drinks, including soda, juice and iced tea, in favour of water, white milk and unsweetened hot beverages. The U.S. doctors’ group also wants to ban processed meats of all kinds. Preference instead should be given to “plant-based meals and meals that are low in fat, sodium, and added sugars.”

While this resolution has no legal force, it is indicative of the general urge within public health and food policy circles. Given the steady stream of demands for soda taxes, calorie counts, advertising regulations and strict mandates over school food, the AMA resolution appears as yet one more effort to seize control of the public diet by force. You can’t smoke on hospital grounds, why should you be allowed to eat a cookie?

This campaign is finding equivalent support among Canadian doctors, such as Rob Stevenson, a cardiologist from Saint John, N.B. Stevenson once argued in a Canadian Medical Journal editorial that “junk food is the new tobacco” and so hospitals should ban fried foods and other unhealthy meals from their cafeterias. He’s also spear-headed a cross-country survey on the state of Canadian hospital food and led a publicity campaign that saw a Halifax hospital shut down its deep-fat fryer.

“The AMA statement addresses several of the leading concerns with hospital food,” says Stevenson in an interview. “And I think it would find reasonable agreement across dietitians and the medical community here [in Canada].” He notes approvingly that the U.S. doctors’ resolution is in line with what’s already happening in high school cafeterias across Canada, with many provinces banning deep-fried foods, excessive cheese, soda and other sugary drinks in favour of baked potato wedges and cardboard-like pizza slices—circumstances that have led to a dramatic reduction in cafeteria use by students.

If Canada does accept hospital food restrictions as per the AMA plan, Stevenson is adamant they must apply equally to retail food outlets as well as hospital-run kitchens. “You can’t take unhealthy foods out of the cafeteria, and then let Tim Hortons sell the same stuff in the first-floor lobby,” he says. Such a policy would likely require an end to most franchised restaurants in hospitals. (That said, Stevenson, who follows a strict vegan diet, does confess to enjoying the occasional unbuttered multigrain bagel and black coffee from the Tim Hortons in his hospital lobby. “Sometimes that might get me through a long night on-call,” he says. Yum.)

But while doctors may claim to have the best interests of patients and visitors in mind in their scheme to impose a diet of “plant-based meals” and water in hospitals, such efforts inevitably invoke images of another type of government-funded institution with a similarly captive clientele—prisons. The AMA plan entails the imposition of an herbivore’s diet on people who may well prefer to remain omnivorous, and without their consent.

Even if we consider it socially and politically acceptable to impose food controls on high school students, adults who aren’t guests of a correctional system ought to retain the right to make their own decisions about what they eat: in hospital lobbies or their own homes. Remember, doctors don’t impose treatment, they recommend it. Regardless of the current public health obsession over obesity, food liberty deserves a defense.

When patients are surveyed on hospital food, choice is almost always their number one concern. Australian research shows, for example, that providing multiple options at lunch or dinner can reverse the large, negative impact length-of-stay typically has on patient satisfaction. Planetree Inc, a not-for-profit U.S.-based advocate for “patient-centred health care”, similarly observes serving appetizing food that caters to patients’ personal choice and palate is “essential to encouraging consumption of their meals.” Some U.S. hospitals, it notes with approval, “supplement daily menus with a standing comfort food menu that includes food items with broad appeal, such as grill items.” Yet another survey by health care consultant HBG Health found 89 per cent of hospital patients said being served name-brand products at meal time would make them feel better.

A preponderance of evidence demonstrates that patients place overwhelming importance on having a say in what they eat. And their preference is for familiar, tasty food. So why would doctors think restricting choice, banning name-brand products and force-feeding their clientele salads and tap water would be congenial to patient satisfaction or a speedy recovery?

Keep in mind also that the presence of brand-name restaurants such as Tim Hortons or Subway in hospital food courts was a direct response to wide-spread bellyaching about hospital cafeterias. Those old jokes about hospital food exist for a reason. It was once awful. If hospitals have upped their game of late, it’s because they’ve been forced into it by the choice provided by private sector competition. Plus, the leasing income from franchised food locations has been a boon to hospital finances.

Depressingly, this doctor-recommended plan to outlaw cured meats, tasty desserts and sugar in your coffee on hospital grounds will have its biggest effect on some of society’s most vulnerable folks —patients and their loved ones trapped in long-term treatment regimens.

There are few more-disempowering experiences than being enmeshed in institutional health care for long periods of time. Prescribed treatments for cancer, kidney disease or other difficult illnesses often require doctor’s visits and procedures over a period of days or weeks. Sometimes it can go on indefinitely. And during this time those afflicted, together with selfless friends and family members who accompany them, essentially become prisoners of the hospital system. It is a grinding experience that leaves everyone feeling drained and helpless. (This is also why hospital parking fees can be such a heated and perennial issue.)

And sometimes the only way to make this grim routine bearable is to include a treat along the way. A coffee and doughnut in the hospital lobby perhaps. A slice of pizza. Or some other tasty, non-vegetarian means of escape. These small indulgences can become a modest way to re-assert some control over your life. It’s called ‘comfort’ food for a reason.

Now some doctors want to take all this away and impose mandatory “plant-based meals.” With water to drink. It seems a cruelty unbecoming of the health care profession.

Read a letter to the editor responding to this piece.