The Grey Cup is haunted by head injuries. It doesn't have to be.

Opinion: Pro sports leagues like the CFL should adopt new technology and new rules to keep players safe – even after their careers are over 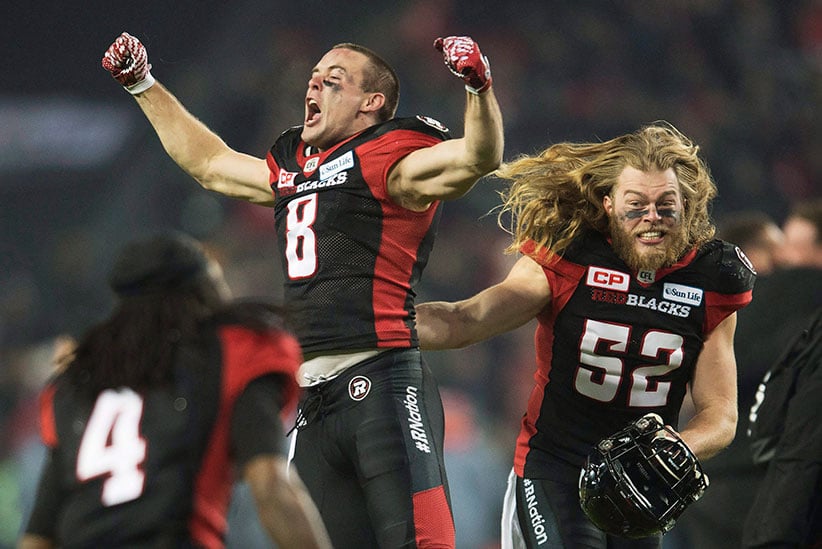 When the Toronto Argonauts and Calgary Stampeders square off in Ottawa for the 105th Grey Cup on Sunday, it will be under dark clouds — not necessarily of weather, but rather the risk of concussions and their devastating long-term effect on players’ brains.

A growing body of evidence — including groundbreaking research examining the brains of living former Canadian Football League football players — suggests that the way the sport is played and the subsequent health of athletes are grave and connected problems.

We have long been suspicious about what football injuries were doing to the brains of some players, but even we were shocked when we brought 22 former CFL players into our lab at McMaster University and studied their brain activity and structure.

Some former players showed readings similar to those one would find in a coma patient. It was astounding to us that the most deeply affected men were still standing, let alone able to carry on everyday conversations.

We discovered this in a two-year research project — Collision Course — conducted in collaboration with Hamilton Spectator reporter Steve Buist, comparing former players to other people in a control group.

The results and the stories of those players were stark, and often sad.

On average, the retired athletes, ranging from 44 to 66 years old, had lost 20 per cent of the mass of the cerebral cortex. This controls movement and cognitive functions including attention, speech and memory.

Of the 22 former players, 16 reported memory problems, compared to just two of the 20 healthy control subjects.

Brain images from some retired players in their 40s looked like images from men twice their age.

It’s not news that concussions from fast-moving, hard-hitting contact sports such as football and hockey have been coming under closer scrutiny. Before our project, there already had been plenty of evidence — most of it derived after athletes’ deaths — that head injuries from football had significantly damaged the brain structure of veteran players.

Our goal was to take a comprehensive and non-invasive look at the brains of living former players, so we used the tools at our disposal, including magnetic resonance imaging (MRI) and electroencephalography (EEG).

We measured the physical structures of our subjects’ brains, and gauged the neurophysiological activity going on in those same brains. These are two very different methods — revealing physical brain structures and activity — yet the results were grimly consistent.

The damage was not universal, to be sure. There was one player who showed no damage on either test, for example. But on balance, it was clear there is a strong and disturbing correlation between football and permanent brain injury.
Brain EEG shows a difference in automatic attention that does not involve conscious awareness, and also difference in voluntary attention that is usually controlled by awareness.

As Canada approaches the Grey Cup on Sunday, one might expect researchers who have seen what we have to be marching outside the game with placards, calling for a stop to the carnage.

Far from it. Both of us will be watching — and enjoying — the action.
Football and hockey are simply great sports, packed with action and surprises, making them tremendously entertaining. Between the two of us, we have played years of both sports — one of us on the field, the other on the ice.

But unlike some, we won’t be cheering on Grey Cup Sunday when players get dumped on their heads, or when they get slammed to the ground and their helmets bounce off the turf. When we watch a game, we can see when a head-injured player is having a seizure after a tough hit, or when a player has lost consciousness even before hitting the turf.

Still, collisions are part of football and hockey, and that’s not going to change, nor should it. Players nowadays are more aware of the risks, and that those risks increase with the number of years they play and the blows they take.

But those risks can certainly be diminished, if there is a will among sports leagues, owners, players and fans to adopt some small changes that can make football and hockey much more sustainable.

Improved rules to end hockey fighting, to better protect quarterbacks in the pocket, and to crack down much harder on illegal, high-risk blows in both sports, together with much stricter enforcement, would make football and hockey safer.

More cautious protocols around possible head injuries would go a long way to reducing repetitive concussion damage that echoes through decades. Today, we do more to protect players’ knees than their heads, and that has to change.

One way to go at it might be to use objective, evidence-based standards for blows to the head.

Technology exists today that can slip easily into a helmet to measure the force and torque of a blow to the head and transmit it to coaches and medical staff on the sidelines. It could be made mandatory for someone who gets hit too hard to be pulled out of play for examination, regardless of the apparent symptoms.

It’s clear that even without tougher rules, some players are ready for changes that will protect them from debilitating brain injuries. It’s already hard enough for a player to survive in a game where any play could be his last.

We understand that dialling back the extreme blows that lead to head injuries might make games slightly less exciting. On the other hand, they might also make them more exciting, as strategy and agility would become more important and integral to winning.

Owners may worry about losing money if the game is perceived as softer — but they will definitely lose money if badly injured players sue them for not taking better care of their brains and win.

There will always be injuries, and there will always be risk. Players accept that.
Surely, we don’t need to see their heads pounded so badly that their already short careers in professional sports leave them permanently and catastrophically injured.