'Food insecurity is not just about food insecurity,' says Kyra Flaherty. 'It ties into so many other societal problems.' 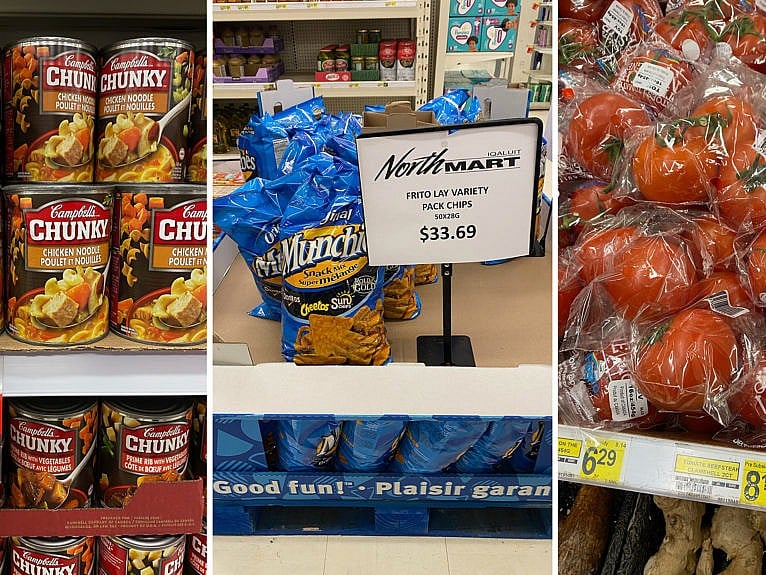 Kyra Flaherty’s TikTok videos are a stark—and often staggering—look at the high costs of living in Canada’s North, even with more than $100 million committed in 2021 to subsidize food and essential items through Ottawa’s Nutrition North program.

In May, the 24-year-old mother of three—who in her day job is a tourism development coordinator with the Nunavut government—posted a video on her TikTok account, @arcticmakeup, displaying the prices of food and essential items during one of her weekly grocery shopping trips to the NorthMart in Iqaluit. She awoke the next morning to thousands of comments from people shocked to see a 200-metre roll of aluminum foil priced at $69.99 (the same roll sells for $25.99 at Costcos in southern Canada), and a 40-pound bag of dog food being sold for $162.99 (typical price: $44.99).

In addition to her mini-exposés on grocery prices, Flaherty has reached millions on TikTok through videos in which she prepares Inuit country food like pitsik (smoked arctic char), and through educational videos about life in Nunavut.

Flaherty spoke to Maclean’s about the impact of her TikTok videos, why she considers access to affordable food in Canada’s North “suicide prevention” and what systemic change she hopes to see at the federal level to adequately address food insecurity in Nunavut.

This interview has been edited for length and clarity. A fuller look at grocery prices that Flaherty has captured on camera appears at the bottom of the post.

Q: What led you to post your TikTok showing the prices of food and other items sold at the NorthMart in Iqaluit?

A: I was posting time-lapse videos of the North on my TikTok, and somebody had commented back saying that they’ve heard the prices up here are outrageous. They didn’t know if it was true or not, and they thought who they heard this information from was exaggerating. So on my next grocery shopping trip, I decided to take some photos of the prices..

Q: The caption on your first one was “affordable food is suicide prevention.” Can you explain that?

A: That caption is the reality we face in Nunavut. There’s no possible way for anyone to thrive in life when they can’t even get their next meal. Food is a basic necessity and if you can’t get that, there’s no way for you to truly be okay. Thankfully, we have an amazing city and many have relied on someone as a friend or neighbour. But when housing prices are too high and food is priced for the higher class, that’s where there are significant problems within our society. Our soup kitchen is often full, so where do those who are turned away go for their next meal? Their mental health would not be okay. That is our reality, and it’s extremely heartbreaking, because we all know way too many friends and family members who have died by suicide here.

Q: You have tagged NDP party leader Jagmeet Singh in some of your videos on food prices. Now that these videos have been seen by hundreds of thousands, have you been contacted by him, or the North West Company, which owns the NorthMarts whose prices you show? What about other political figures?

A: No, I have not. I do work in tourism though, and in one of our last meetings I brought up how [TikTok] could be a really good platform for us to use in our media division. So they invited me to help guide them through that process. Before I even started making these videos I’ve always had faith not only in [the NDP] party, but [Singh], especially when his campaign was running. I see great change in him, and him having TikTok connects him to someone like me who makes videos. I really hope that he sees my videos.

Q: Other than spreading awareness, what impact have your videos had?

A: I’ve done two virtual classroom visits after teachers came across my videos. One was in Connecticut, and the other was in Canada. During the visit, I spent about an hour with each class and talked about the North. The students had all watched my videos, so they were just asking me about misconceptions of the North, about the food prices, what life is like up here, and about our culture. They were blown away and shocked about the food prices, for sure. There’s also been so much love in response to my videos. People have sent so many [food items] to my mailbox, I keep my mailing address in my bio, and I distribute the items to families who need them.

Q: I’ve seen some of your videos where you unbox the packages mailed to you. What items have you received from people, and how do you distribute them to those in need?

A: The first package I gave to our neighbour, who lives on welfare, because it contained a couple of items that are mostly essentials like some noodles and crackers. I think there was some aluminum foil as well because one of my videos displayed the outrageous price that the North West Company was charging for it, so they sent some of that. I’ve given some items to daycares because people have sent baby clothing or Pampers and other baby items. But because we know everyone here, you just kind of know who needs it so we often bring it to their front door. I think I’ve gotten about 15 to 20 packages.

Q: As someone who has lived in Nunavut for your entire life, when were you aware of the disparities your territory faces when it comes to the prices of food and essential items?

A: More so when I was in high school. I did a project on food insecurity in the North, I wish I remembered more about that. When I was a young kid, my best friend’s household was not doing well financially, so she would come over to spend time with me a lot and we’d give her extra snacks. When my parents would order sea lift items, they would always give some to them as well. I remember noticing that as a kid.

Q: Your friend’s experience is not unique. Inuit in Canada face the highest rates of food insecurity of any Indigenous population in an industrialized nation. What do you make of that statistic?

Q: How much do the prices of food fluctuate throughout the year?

A: A lot can change within a couple of weeks. Usually, on our government paydays, which is every two weeks on a Friday, you can tell that the prices have gone up. Items like fresh fruit and vegetables, especially in the winter, are not very fresh and don’t last as long, and they are also much more expensive. Fresh produce sometimes doubles or more in price. Grise Fiord, where my father’s family is from, has one local Co-op which is their only grocery store. They were having trouble with how to lower prices for residents there, and Grise Fiord is probably one of the worst places in Nunavut for food costs.

Q: Other than from one of the grocery stores in Nunavut, where else can you buy food and essential items?

A: A lot of people eat country food, so that’s probably the most sustainable and fresh meat that you can get from here. It is also local; it doesn’t need to be flown in. But if you were to buy things like non-perishables, the biggest place I would say would be Amazon. A lot of people resort to buying their groceries from there.

Q: Amazon has been offering free shipping year-round to Nunavut with a Prime membership, which is a pretty big deal. How has this changed how people shop?

A: It’s both good and bad. A lot of people don’t have the spare savings to spend on cereal and other non-perishables to come in a few weeks from now. Often they need their food right now, and [through Amazon] it can take a couple of weeks to get here. So even though they have access to somewhere that’s cheaper and that is delivered for free, sometimes they don’t have any choice but to buy from the store if they don’t have any food in their cupboards. But it definitely is a game-changer and saves people a lot of money.

Q: Nutrition North launched in 2011, and today you are reminded of the subsidy amount on the receipt whenever you purchase something—what are your thoughts on the program?

A: I honestly think [the federal government] can do more. I’m glad the program is there, but I definitely think more can be done—especially if they see the statistics that show our people are going hungry and the kids are going hungry to school. That should be raising so many red flags, and they should be putting more funding and more effort into that. 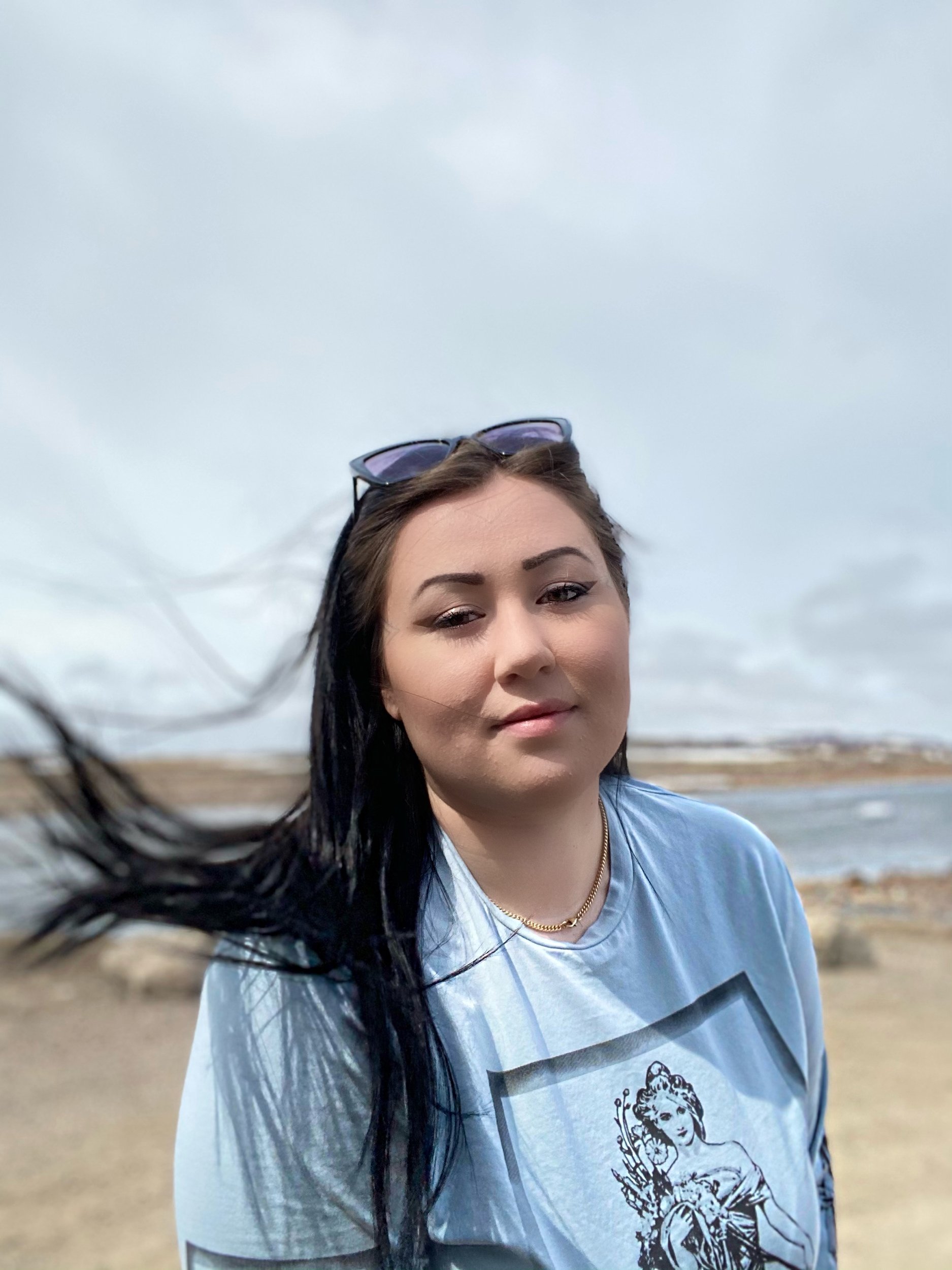 Q: Today, what role do food banks and financial aid have in ensuring the needs of the people in Nunavut are met?

A: If there was no food bank or financial aid, I can’t even imagine how our people would be surviving. Like, that’s just a scary thought. It helps so many families. [The food bank] is full all the time. Every time I drive by, there is a lineup of people outside waiting for their meal to be served. They are probably serving more people than what they can handle. I know that they run out of food sometimes, so not everyone can even access food through their food bank if they’ve run out.

Q: With everything going on in your community, and with all of this information publicly available, what do you want, not only politicians but Canadians in general to know about this crisis in Nunavut?

A: I think that’s a really good question and a really big question. Before anything actually can be done, people should not just be more aware, but more sympathetic to us. Because there are too many who say that we live in that wasteland, or that frozen area, and that we get what we deserve for living here, and if we don’t like it then we should just move to the other parts of Canada. But you don’t just give up on things you love. This is our home. We’re not just going to give up and give in.

Note: After speaking with Flaherty, we contacted the North West Company, which owns the NorthMart stores that many Nunavut residents rely upon for groceries. Spokesperson Ellen Curtis said in an email that the company advocates for its customers on the issues of food insecurity and high prices.

“We support and invest in programs and infrastructure that lead to lower costs including more efficient supply chains and expanded sealift and winter-road warehouses,” she said. The company’s stores, she added, “operate in the same high-cost environment as our customers, where everything is more expensive, including electricity, rent, transportation and construction.”

Regarding Flaherty’s observation that prices seem to rise every second Friday, Curtis said: “We do not raise prices to coincide with community paydays.”  — NS

A look at food prices in Nunavut 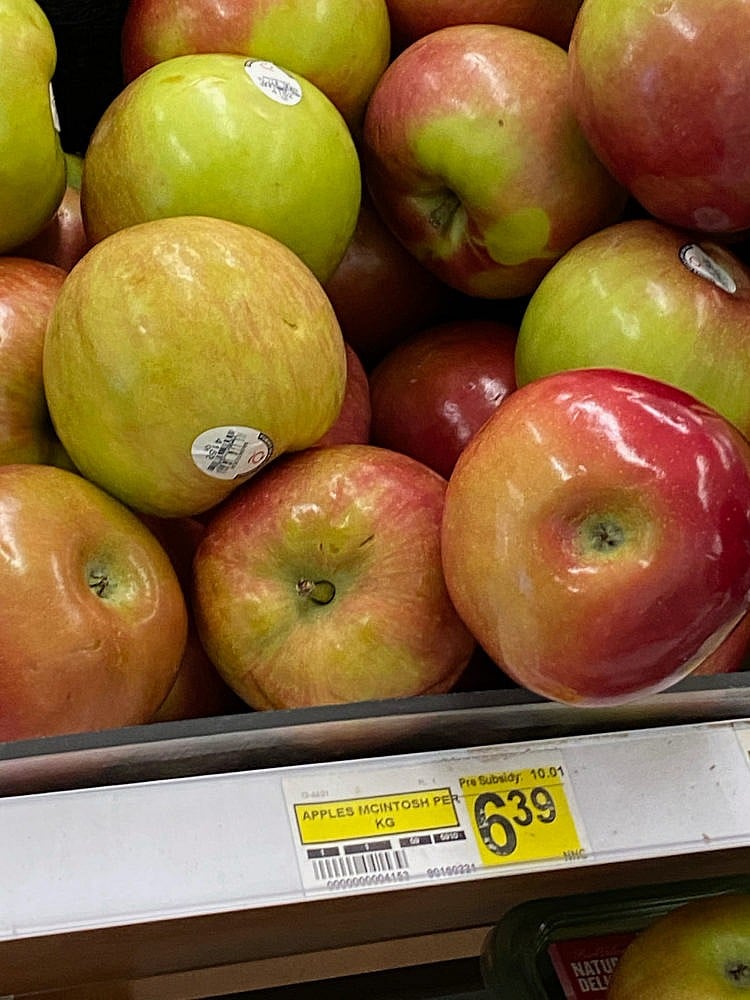