The magic of Finland's baby boxes comes to Canada

Credited with cutting infant mortality rates, the program has been adopted by more than 30 countries—and in January, it comes to Canada 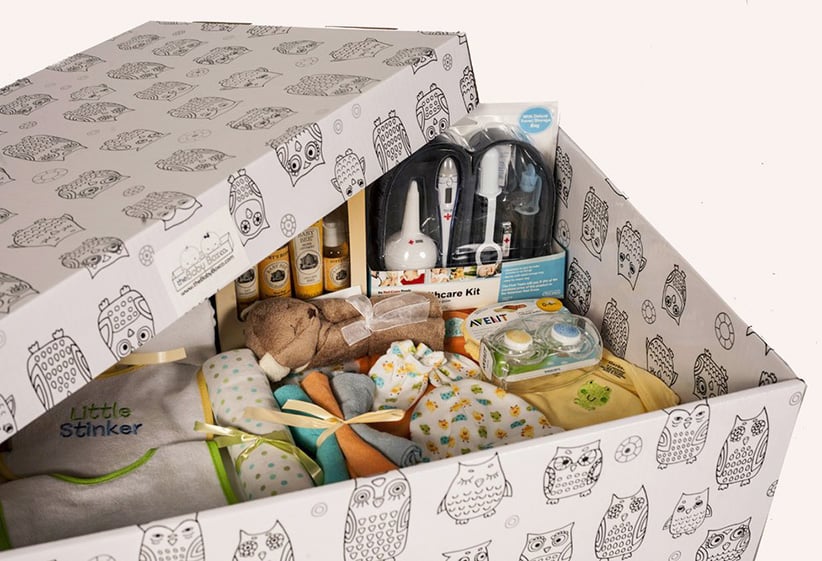 In Finland, every new mother gets a “baby box” of supplies: clothing, bibs, mats, diapers, sheets and toys, all in a box (complete with mattress) that the baby can safely sleep in. Funded by the government, and distributed equally to Finland’s mothers in need and those in positions of wealth and privilege—even the Duchess of Cambridge was sent a box as a goodwill gesture from the Finnish Government—the boxes are credited with much more than warm fuzzy feelings. Since the program began in 1938, Finland’s infant mortality rate has dropped from 65 deaths per thousand births to one of the world’s lowest, at 3.3.

Initially launched to give babies an equal start—and to steer mothers to the doctor’s office to pick up their boxes—the famously successful program has inspired copycat versions in more than 30 countries including, as of January, Canada.

Jennifer Clary, co-founder of the California-based The Baby Box Co., the first company to make baby boxes available outside Europe, connected with the Alberta Government and University of Calgary on a new research initiative. The program is called “Welcome to Parenthood,” and with the support of grants, it will be distributing 1,500 baby boxes beginning in 2016.

Clary founded The Baby Box Co. with her best friend, Michelle Vick. “We’re a for-profit company, but we operate as social enterprise,” says Clary. Five versions of the Baby Box, from a $70 “Bed Box” to a $225 “Every Mother Counts Box,” are currently commercially available directly to customers, while partnerships with governments and non-profits make customizable versions for various communities. “We’re kind of a product provider but we’re also a community partner,” Clary says.

Canada’s universal health care makes a publicly funded baby box system much more plausible here than south of the border. But do we actually need one?

Early Childhood Development Services, part of the Government of Alberta, thinks Canada can benefit from the program. “We’re using the basic baby box, with the mattress, and we’ve collaborated with the province on some basic additions,” says Jennifer Weber, senior manager. Their version of the box includes breast pads to encourage breastfeeding, a brain-developing children’s book by a Canadian author and a “Crib-Side Assistance” resource for dads to encourage paternal bonding. Community-specific boxes “really depend on the issues you want to address,” says Weber.

But even Canada’s infant mortality rate is somewhat debatable; depending on who you ask, it’s either very low or far too high, at about 5 deaths per thousand births. This is low compared to most countries—Angola, Sierra Leone and Afghanistan all have rates over 150, and the global average, according to the United Nations, is almost 50 deaths per thousand. But among peer countries, Canada ranks second-to-last, and a Save the Children report found Canada had the second-highest rate of first-day infant mortality in the industrialized world.

To others, these numbers aren’t so straightforward. “We’re very fortunate to live in a country where infant mortality is very low,” says Dr. Shaun Morris of SickKids’ Centre for Global Child Health. Of rare infant deaths, he explains, most are because they’re born prematurely and need far more medical intervention than could possibly come in a box. “Babies born at 24 gestational weeks don’t need rompers and onesies; they’re in intensive care, under warming lights, for three months. They’re not in a box, and there’s nothing in this box that would save a life in Canada.”

In fact, The Centre for Global Child Health actually makes its own “newborn’s survival kit” and has distributed almost 9,000 of them across Kenya and Pakistan, where most women give birth at home with no trained medical help. “We provide a sterile plastic birthing mat, a sterile blade to cut the umbilical cord, a topical antiseptic for the stump, a sticker that monitors the baby’s temperature, and a non-electric heater and blanket,” he says. Researchers are hoping the kit will prevent about a third of infant deaths, and it costs less than $5. “In the grand scheme of things, there are people who truly need things,” says Morris.

“We know Canada’s doing very well, but Canadians still have parenting issues that are unique to us,” says Weber. “We have vulnerable families and many communities with their own particular needs. We have teen moms, single parents, families in temporary accommodation.” Alberta’s baby box, amongst onesies and plush toys, also includes access to drop-in and mentor programming, a “university membership card” to overcome literacy issues, and an online video program of experts to answer questions from new parents.

As always, even in Canada, “people who need intervention the most are the hardest people to get things to,” says Morris. Baby Box could capture a huge percentage of moms if distributed by doctors, obstetricians and midwives—but widespread distribution is a long way off. “You have to start small,” admits Weber. “We’re getting good evidence now, fine-tuning the vision, testing the ideas and visiting the communities. Focus groups already show the box helps with that totally overwhelming feeling that comes with having a baby.”

“Look, it’s a nice idea to help first-time parents have everything they need,” says Morris. What real effect, if any, the baby box might have on postpartum depression, safer sleep or childhood development in the West is currently unknown.

“This box is about convenience, and there’s a certain socioeconomic group that would probably buy it, and that’s okay,” says Morris. “But in this era, it shouldn’t be advertised like it will help your baby survive, because that’s not true.”