New programs offering faster—and tuition-free—training are cropping up around the country. But are they enough? 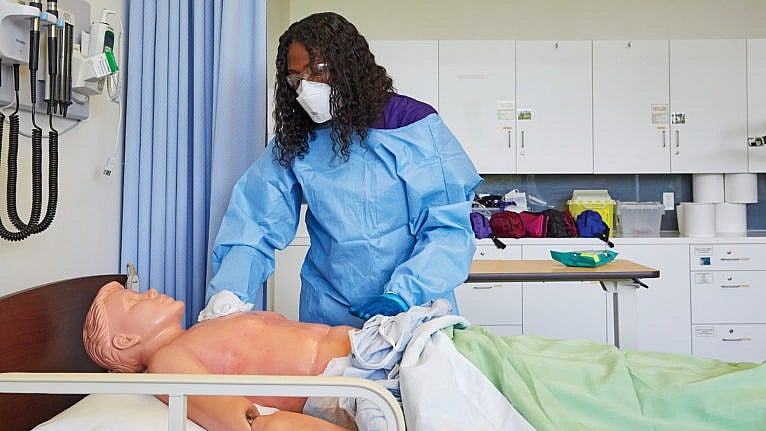 Centennial student, Jasmine Joseph in a clinical lab at the school for PSW workers. (Photograph by Carmen Cheung)

Jasmine Joseph started a customer service job at Apple straight out of high school. “Even then, I was thinking about going into health care but felt intimidated by the required biology and chemistry courses,” says the 28-year-old who lives in Toronto. She worked the job for a decade before going on maternity leave near the start of the pandemic. Then she learned about a tuition-free, accelerated personal support worker (PSW) program on the news.

“I thought, this is my opportunity to get into the field,” says Joseph. “Plus, I had heard about the shortage of PSWs in Canada, and with the pandemic going on, I figured I could help myself career-wise and help others at the same time.” She enrolled in a 24-week program at Centennial College and says it’s one of the best decisions she’s ever made.

In Canada, PSWs—also known as health-care aides (HCAs), or orderlies in Quebec—work in settings ranging from private homes to hospitals and long-term care facilities. Broadly speaking, they assist disabled, ill or elderly individuals with daily living (bathing, eating and so on), light housekeeping and sometimes with medical procedures delegated by, or under the supervision of, a doctor or nurse.

They’re also in critically short supply. During the pandemic, that problem was made glaringly obvious when long-term care facilities—where a large portion of the country’s PSWs work—regularly made headlines as they struggled to maintain enough personnel to look after their residents. The staffing shortage got so bad during the summer of 2020 that the federal government deployed the military to care homes in Ontario and Quebec, where it was reported that some seniors died from dehydration and neglect.

MORE: COVID-19 in long-term care: A report from inside

As a response, condensed, tuition-free PSW programs have popped up across the country. On average, full-length PSW programs take about eight months to complete—these new, shorter programs range from three to six months. Ontario and Quebec’s provincial governments have funded programs to train 6,000 and 10,000 PSWs, respectively; the federal government also recently partnered with Colleges and Institutes Canada (CICan) to train 4,000 new PSWs in various provinces and territories. Graduates of that program, which isn’t available yet, won’t work as PSWs, but rather in a supportive capacity that excludes participation in medical care.

“The number of Canadians over the age of 85 is expected to triple in the next 30 years,” says Denise Amyot, president and CEO of CICan. “We know there’s a shortage of PSWs. Meanwhile, we know many workers have been displaced from their industries during the pandemic, especially in areas like hospitality and tourism. Our program allows participants who aren’t sure if PSW work is right for them to dip their toes into the field, and at the same time, contribute to the well-being of their community while earning wages.” (CICan’s program consists of a 10-week online course followed by a four-month paid placement.)

“What we’ve done with the accelerated program is focus only on vocational learning outcomes—for instance, we’ve removed the English and general education credits,” says Natashia Deer, chair of nursing programs at Centennial. “And instead of doing eight courses at the same time, students only take four, so they can really focus on the subject matter. 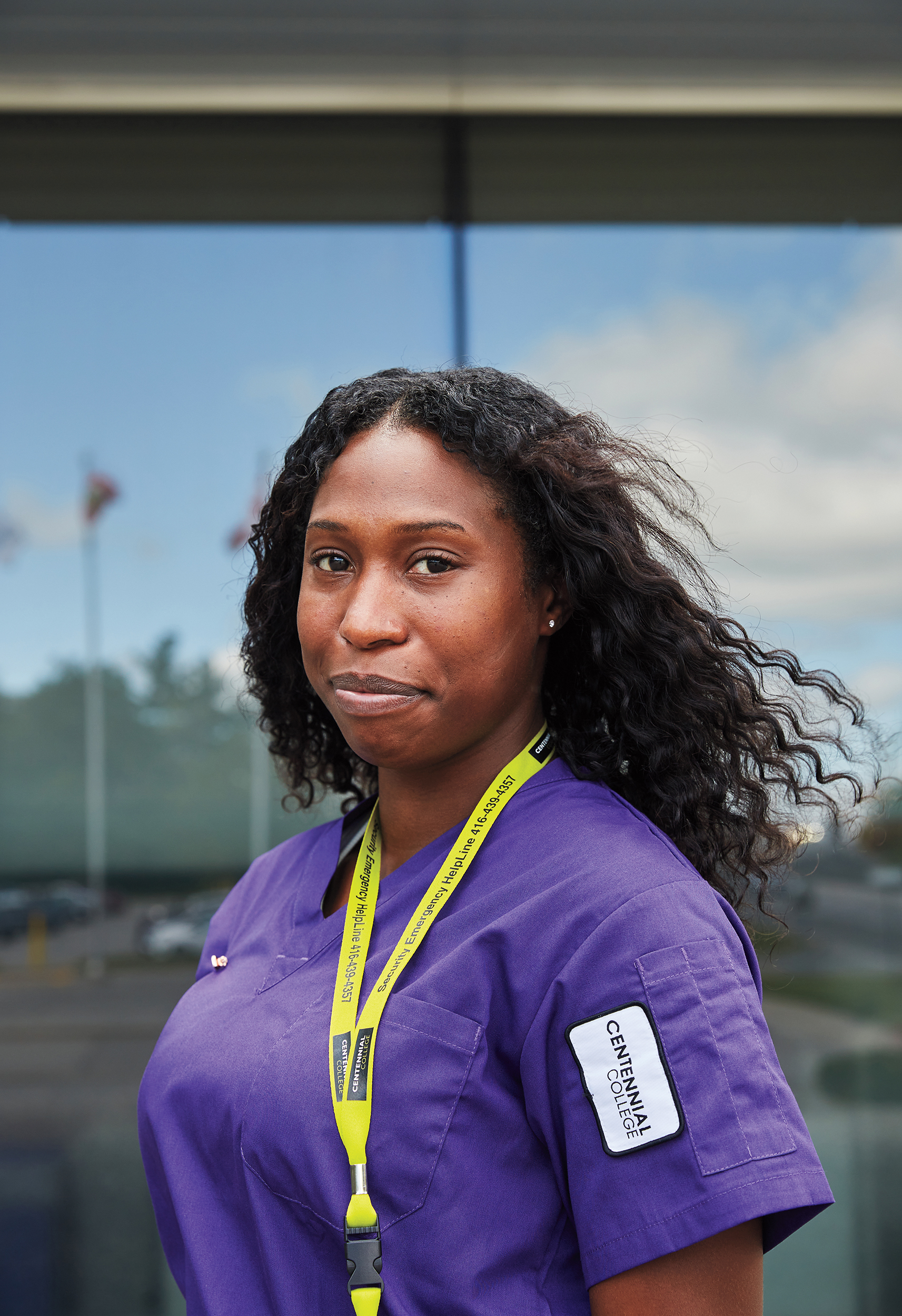 Centennial student, Jasmine Joseph in a clinical lab at the school for PSW workers. (Photograph by Carmen Cheung)

Halfway through her program, Joseph describes it as practical, collaborative and well-designed. “We’re in labs once a week, so we have access to hands-on learning,” she says. “In our skills lab, we practise how to feed clients, check their vitals, handle equipment like wheelchairs and crutches, and what to do in case of an emergency.”

Still, Joseph is concerned about commonly cited workplace issues for PSWs. “I think they’re really undervalued. Some people see PSWs as glorified babysitters,” she says. “But so much work goes into making sure clients are being treated with compassion, dignity and respect. I’m also worried about workplace injuries and being overworked, since there’s such a huge shortage.”

Burnout is a notorious issue for workers in the field, and a major contributor to its often cited turnover problem. According to Health Force Ontario, 50 per cent of PSWs in the health-care sector stay for fewer than five years, with 43 per cent listing burnout due to short staffing as their primary factor for leaving. Turnover is highest for part-time and casual positions, which account for 48 per cent and about 11 per cent of PSWs in the province, respectively.

Is accelerated training the solution to this problem? Some experts argue that while programs like those described above have their place, they’re only part of a much larger picture. “If we need to create PSWs and do so quickly, then an accelerated program makes sense. But the more fundamental reasons we have a national shortage are that this work is largely unregulated and not well-paid,” says Dr. Samir Sinha, director of geriatrics at Sinai Health in Toronto and a long-time advocate for seniors. (Sinha is also director of health policy research at Ryerson University’s National Institute on Ageing, and chair of Canada’s National Long-Term Care Services Standard, a federal technical committee that will oversee the development of long-term care standards.)

He believes that a lack of regulation—and in turn, a lack of standardized training protocols—means PSWs can wind up under-prepared for the jobs they’re hired to do.

“In particular, I think there’s not enough of a focus on [caring for] individuals living with dementia, which is a problem given that the majority of people in our long-term care homes have some form of cognitive impairment,” he says. “Bathing someone is one thing—bathing an individual with significant cognitive impairment is another, especially when you haven’t been trained to do it well. The truth is that this work is incredibly highly skilled, but we don’t treat it that way.”

MORE: How the pandemic would have been different if PSWs were regulated

An Ontario long-term care staffing study from 2020 emphasized a gap between educational experience and work environment for PSWs. The biggest complaint among new graduates of PSW programs in the long-term care sector is “preparedness for the speed at which tasks need to be completed,” according to the report. It also noted that staff can “feel insufficiently prepared or supported” to care for residents with cognitive impairments, who account for 81 per cent of long-term care residents.

Sinha believes there are two main keys to solving the national shortage of PSWs: national, or at least provincial, regulation, and wage parity across different care settings. “Wage parity is important so you don’t have people jumping ship all the time,” he says. “A doctor makes the same salary wherever they work in Ontario. But that’s certainly not the case for PSWs.”

Deer believes that addressing the shortage is partly a matter of convincing potential students that being a PSW can be a first step toward other careers in the health-care sector. “We need to rethink pathways for these workers. We’re in a time where it’s rare for people to stay in a job for 30 years. So instead of thinking about it as ‘people won’t stay,’ it’s about allowing for fluidity within health care,” she says. “I do think we should have standardized PSW roles across the country, because that would allow people to move more fluidly through the system.”

She also says educators should work to expand the public’s perception of what a PSW can do. “High school students or others thinking about entering these programs should know that while you can work with an aging population, you can also work with children or teens, with the right training.”

RELATED: Fear and exhaustion: Working as a PSW in long-term care during the coronavirus

PSW work is also a gendered and racialized issue—90 per cent of the workforce is female, and 41 per cent are racialized. “This space tends to attract racialized women and new Canadians who don’t necessarily have a ton of money sitting in the bank to do a training program, so tuition can be a big barrier,” says Sinha, who says he’s supportive of the tuition-free aspect of the new accelerated programs.

“Historically, female-dominated professions have not been paid as well,” says Deer. “I think there should be a base wage, but I also think those who’ve advanced and received additional training to support the care they’re providing should be paid accordingly.”

In April, Ontario introduced a bill that attempts to register PSWs in the province (along with physician assistants and behaviour analysts). Bill 283, the Advancing Oversight and Planning in Ontario’s Health System Act, seeks to introduce a new corporation called the Health and Supportive Care Providers Oversight Authority. It received royal assent in June, which means it will soon come into force.

Sinha is hopeful the bill will make a dent in the problem, but notes what he considers to be significant oversights. “The bill doesn’t make it mandatory to become a registered PSW, and it’s not clear where registration will be required,” he says. “It’s hard to force the regulation of a group of people where there is no educational standard, standard exam and so on. And in a profession where it’s hard to attract people, this could create more barriers for some. In addition, it’s not clear how hard it is to lose your registration when so little abuse gets reported by a highly vulnerable population getting care.”

Sinha notes that some provinces like B.C., which requires PSWs (known as HCAs there) to register with the province if they want to work with publicly funded health authorities, fared better in terms of organizing their workforce during the pandemic. “I think the jury is still out on whether this new measure will make a meaningful difference. I certainly hope it will.”

At the time of writing, Ontario had not yet graduated its first cohort. Meanwhile, more than a third of Quebec’s 10,000-student cohort didn’t finish the training program last year. (The province is currently training another 3,000 students to make up the difference.)

It’s unclear how big a dent these programs will make in the national shortage, and the problems facing PSWs don’t seem to be on their way out any time soon, but the enthusiasm of fledgling trainees looking to make a difference in the health of their communities seems as strong as ever. “I decided to take the chance and see where I end up,” says Joseph. “I love the program, and I’m really excited to get out in the field, do my placement and actually help people in my community.”