The unbearable lightness of Donald Trump in a coronavirus crisis

He's been exposed to it but not tested. He shakes everyone's hand. But the U.S. president has finally lurched into action—reluctantly. 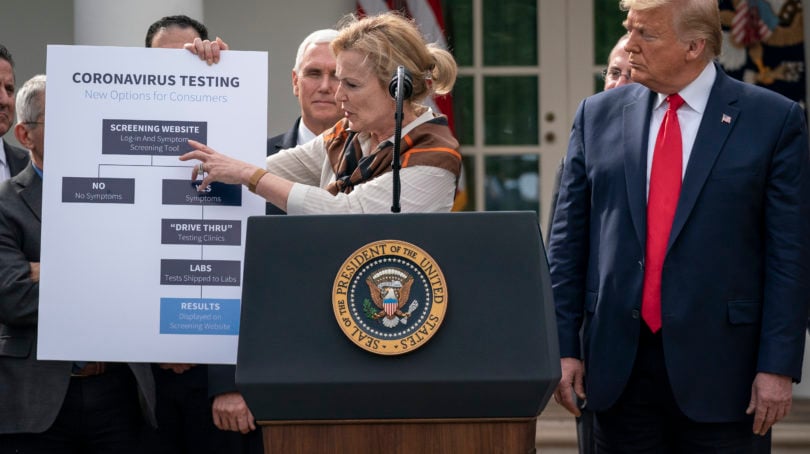 Friday the 13th in the ghostly capital, barely a tourist on the streets of Washington, D.C., the Smithsonian Institution shutting its doors, the Cherry Blossom Festival axed, 700-goal Alex Ovechkin and his hockey Capitals and the World Series Champion Nationals benched, and here comes the president of the United States, feeling as pink as the magnolias.

He is totally fine, he says—no symptoms whatsoever, no fever, no cough—and he tells us, hundreds of us, crammed elbow-to-elbow on folding chairs in the Rose Garden and inhaling each other’s virulent RNA, that the White House doctor has told him that there is no need for alpha-male Donald J. Trump, three months and a day before his 74th birthday, to be tested for the life-threatening virus enumerated COVID-19, even as his administration races to set up drive-thru laboratories in Walmart and Target parking lots to calm an anguished land.

But he will be tested anyway, probably, maybe, because some functionary from Brazil grinned with him for a snapshot at Mar-A-Lago last weekend, one of the hundreds of Trump lovers and Trump lackeys who cluster around him every hour of every day of his story-book life, and who knows how many of those people will be prostrate with fever a week from now?

Not in the audience on Friday: daughter Ivanka, who similarly posed with an infected Australian official the other day. Senior Advisor Ivanka is working from home today. “If you stay home, it’s not bad,” her father says.

Around the president, too close for viral safety, ill-advisedly pumping his outstretched, oblivious mitt, are the chairmen—all men—of the great retailers and the mega-pharmacies and the labs that put those little boxes outside your doctor’s office so that the test tubes of your blood may be couriered to the white-coats for the centrifuging that will reveal whether or not you are in what the administrator of the Centers for Medicare and Medicaid Services calls “an end-of-life situation.”

Relentlessly urged to predict the unpredictable—how long will it be before the coronavirus bell curve swoops downward and Americans can go to school and visit Grandma and run the bases again—the head of the National Institute of Allergy and Infectious Diseases finally shrugs and says, “eight, nine, whatever weeks.”

RELATED: Will Canada close its border with the United States?

You can’t spell pandemic without P-A-N-I-C, and its antidote is Trump, at least it is on this oddly steamy March Friday afternoon. He declares a national emergency to free four dozen frozen billion dollars in cash, hints at adding the United Kingdom to his keep-the-hell-out list, talks about bailing out the cruise and airline industries—“nobody has asked me”—and says that he spoke to Prime Minister Justin Trudeau about this and that, but that shutting down the U.S.-Canadian border was neither that nor this.

While Trump is speaking, the Dow Jones Industrial Average skyrockets to its largest one-day gain ever, one day after it collapsed to its worst loss in history because of another speech that Donald J. Trump made.

Moving markets, healing the sick, cajoling Walgreen’s to lie down with CVS, and Walmart with Target, and Lab Corp with Quest Diagnostics like the young lion and the calf of the Book of Isaiah, pressed—as he is day after day—far beyond the limits of his military-school education, he is a real-estate erector and fake-news barker confronted now with the possible end-of-life situations of tens of millions of people, some of whom, being dead, might not be able to vote for his re-election, depending on where in this country they live.

“I don’t take responsibility at all,” says Donald Trump, referring to everything that has gone wrong heretofore.

RELATED: As coronavirus spreads, Americans need a leader who soothes and unites. Instead, they have Trump.

Over at the empty, evacuated Capitol, Nancy Pelosi has spoken nearly one dozen times in a single day to Steven Mnuchin, Trump’s secretary of the treasury, trying to find common ground between the parties on a package of aid for furloughed workers and impoverished families.

The Speaker of the House comes out of her sanctum and invokes “tens of millions of little children who rely on free and reduced-price lunch.” She says that “the three most important parts of this bill are testing, testing, testing.” Holding the House majority, her Democrats can pass any bill she writes at any moment. But Republicans, cowed and cringing, are waiting for Donald Trump to signal his acquiescence before they take a stand.

In the Rose Garden, Trump swats Pelosi’s proposal (and his own money-man’s best efforts) away like a deerfly.

“I don’t think the Democrats are giving enough,” he says. But he is just Trumping.

“Our nation, our great nation, has faced crises before,” says Nancy Pelosi, but that was before the alpha male of our times moved into the White House. An hour later, she and The Donald—the man whom she impeached but could not extinguish, the president whose paper she shredded in contempt, reach a deal. The markets love it. Is there anything that Donald Trump can’t do?