Vaxx Populi: A friendly competition between economists is generating the graphs and information Canadians really care about 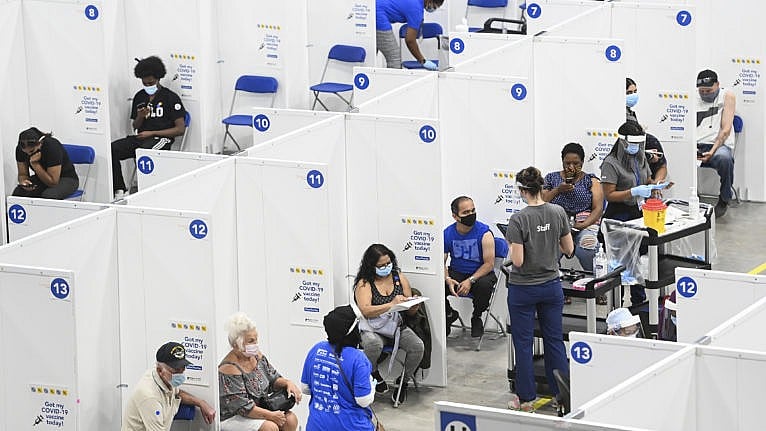 Vaccinations at the CAA Centre in Brampton, Ont. When the numbers are in, Shaffer and Tombe will chart them in ways we can all understand. (Nathan Denette/CP)

At the beginning of the pandemic, Blake Shaffer started plotting COVID-19 case data and posting them on Twitter. “Seeing when trends might turn, was a way of giving me a feeling of certainty in a world that was weirdly spiralling out of control,” explains the assistant professor of economics from the University of Calgary.

“For me, it was cathartic,” he says, “but from the feedback, I realized that not only was I helping myself but I was helping others.” He’s since expanded to charts that track the vaccine rollout, including one that plots the increase since Jan. 1 of eligible Canadians getting first and second shots, accompanied by “Stayin’ Alive” by the Bee Gees.

He isn’t alone. Trevor Tombe, a colleague in the economics department, is also posting a wide variety of vaccine graphics, largely for an audience on Twitter. Every evening, Tombe tweets a long thread of vaccine graphics, ranging from a map of Canada showing each province and territory’s populations with first and second doses, to when he estimates Canada will match the U.S. in doses per 100 population (as of June 7, it was 33 days.)

RELATED: What it’s like to return to ‘normal’: Awkwardness, uncertainty and moments of overwhelming joy

Neither one is a health economist—Shaffer focuses on electricity markets and climate change while Tombe’s areas include international trade and public finance. Yet they have become essential sources for Canadians tracking the vaccine effort, and two examples of a coterie of ad hoc groups and private individuals who have filled our pandemic data chasm with easily accessible graphics and websites. More than just complementing the published data of  governments and public institutions, they’ve become indispensable primary sources in their own right.

Tombe and Shaffer are also having fun, especially in critiquing each other’s data visualizations and ribbing one another over their choices of music used to spice up their graphics. When Shaffer added techno pop to an Alberta chart, Tombe responded with a “make it stop” GIF. “I clearly have better taste in music when it comes to GIFs, for sure,” Tombe says:  “If you’re having an animated GIF of Canada and the U.S. vaccination rates where we overtake them and Queen’s ‘We are the Champions’ does not pop right into your mind, then something’s wrong.”

They feed off each other’s ideas. When Tombe posted a first dose vs. second dose graphics that was very similar to one posted 30 minutes before by his colleague, Shaffer then responded, “Since @trevortombe copied my idea, I’m copying his chart format…”

For all the talk of duelling economists and graph wars, “there’s no real animosity,” says Tombe. “It’s all play; actually we are very good friends,” concurs Shaffer, pointing out that Tombe was his Ph.D. supervisor at the university. “We are both data nerds. Data visualization is a bit of a passion. Finding the right way to represent data, to send a clear and complete message is important.” And like other Canadian economists, they’ve long used Twitter as a feedback mechanism, gathering comments for their creations then working to improve them.

A few years ago,  both learned a computer coding language called R, that has advanced their efforts. “It’s a very very powerful tool in data analysis, and we both use it in our research and teaching, as well,” says Tombe. Their vaccine creations also help improve their skills. “Coding is like a language,” Shaffer explains. “How to learn? Immerse yourself. A way to do that is doing a lot of coding on interesting things, like vaccines.” Meanwhile, the attention generated by their charts has nudged both economists to do work outside their traditional fields, including co-authoring peer-reviewed public health journal articles.

Like Shaffer, Tombe pulls data directly into his graphic from outside sources. “Once you write the code, then each day it takes zero effort to update what figure was produced the previous day,” Tombe explains. Though his evening Twitter thread of vaccine facts and charts could be automatically updated and posted, he  likes to look at it before publishing. Still, he has automated one part of his vaccine effort: a Twitter bot account, @CDNVaccineCount, which publishes a graphic four times a day showing the current percentage of population with single and double doses of vaccine.

Shaffer figures people gravitate to the accounts because digging up and inputting the information requires a great deal of legwork. He and Tombe both rely on data from another member of the ad hoc group of pandemic data volunteers: an undergraduate student at the University of Saskatchewan. Noah Little was studying biomedical neuroscience at the very start of the pandemic when he created a website to chart cases of COVID-19 in Canada. Since then, with the help of a handful of volunteers, his website, COVID-19 Tracker Canada, has become one of the top sources for pandemic information in the country.

The site really took off when it began posting vaccine data at the start of the rollout in the winter, in part because there wasn’t much competition at the time. “There wasn’t even a national dashboard,” says Little. Now, Our World in Data, a site that gathers numbers on the pandemic from around the world, uses data from Little’s site in its vaccine and hospitalization charts. “Google ‘vaccines in canada’ and it’s our data,” he says, noting that the search engine uses Our World in Data graphics.

Little and his volunteers gather the data manually, striving to post it as soon as it’s available from the sources. (They’ve explored scraping solutions, but those proved unworkable, glitching when governments tweak website coding.) To get vaccine data from Ontario, for instance, Little goes to the 34 websites belonging to the province’s public health units. It takes a total of three or four hours of work a day, which is broken up into many, many 10-minute chunks. And with more than 100,000 people accessing the site daily, that volunteerism can be expensive, especially as website hosting costs rise. So in the summer, Little added a donation button to the bottom of the home page. He’s now getting enough contributions that he’s no longer paying out of pocket to maintain the site.

The pandemic has also highlighted how hard it is to get timely data from governments. “Two economics professors are providing this information that is being used widely and the data is coming from an undergraduate student. Where is the government on this?” asks Shaffer. The Public Health Agency of Canada, “has a really nice dashboard but it’s got a lag,” he notes. “They post every Friday so it’s anywhere from seven to 13 days [old.] That’s OK for after-the-fact analysis, but it doesn’t give us our daily scorecard that so many people are hungry for.”

While a few provinces, including Alberta and Ontario, have good electronically-accessible data, most only publish broad province-wide metrics. When Shaffer published a graph showing the race to 70 per cent of eligible residents getting first doses, a re-opening milestone in Alberta, people in other provinces asked him to create something similar for them. He had to disappoint them, saying: “I wish I could, but you don’t have the data. Or your government is not showing the data.”

Such problems are not confined to health information. “How much oil is produced in Canada is not actually a question that we know the answer to, if you can believe it,” says Tombe, explaining that there are different sources of data with different estimates. He’s not optimistic that things will improve, at least not in the near future: “A lot of provincial governments really guard their jurisdiction and sovereignty, if you will, very tightly. And that makes it very hard to have harmonized approaches to data gathering, collecting and then reporting.”

But the demand for pandemic data and charts shows no signs of waning. “The pandemic is affecting us all, regardless of your profession or livelihood,” Shaffer explains. “People respond almost on an emotional level, which is not that common [in my field].

“I get really excited about a great chart about electricity generation and energy prices. But there’s only about a dozen people who share that excitement. This has been a whole different level.”