What makes François Legault think Quebec is ready to re-open?

By almost every measure, it is the hardest-hit province by the coronavirus pandemic, and the numbers its government cites are a small part of the picture 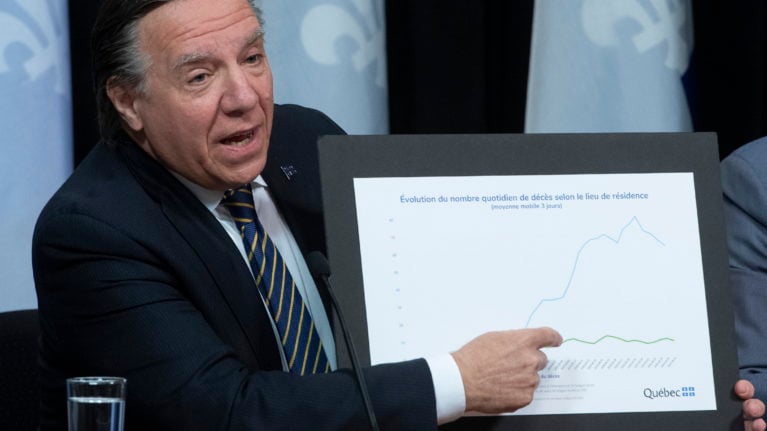 Premier François Legault announced that Quebec will begin reopening its society on May 4. That’s when retail stores with street-front entrances can open in regions outside hard-hit Montreal; the city will start re-opening on May 11.

On that day, the manufacturing sector can start again, as can road and infrastructure projects. Already Bombardier has announced it will bring back 11,000 workers. As well that day, kids can return to elementary schools in regions outside the Montreal area, which reopens the next week, on May 19.

There will be physical distancing and other public health measures, but no one is under any illusion what the relaxation of self-isolation rules mean: the number of cases will climb, as will the number of deaths. “I hope not too many people will die. But make no mistake, the virus is here, and it is here for a long time,” said Dr. Horatio Arruda, Quebec’s director of public health, yesterday. “We know it’s a risky bet. But we can’t eliminate this virus. It will circulate. The question is, ‘How do we balance everything?’ ” Among those factors are the mental and physical health of people in even longer self-isolation as well as the impact on the economy.

Yesterday, it reported 775 new cases and another 83 deaths. To date, more than 25,000 cases have been reported as well as nearly 1,700 deaths, the vast majority of them seniors, including a majority in long-term care (LTC) homes that have been overwhelmed by the virus. It’s by far the hardest hit province in Canada. Yet now it’s about to reopen key parts of its society.

What data, then, are the province looking at that the rest of the country isn’t? Because it certainly isn’t seeing sustained reductions in its number of new cases—one of the conditions leaders in other jurisdictions have set out for easing their own lockdowns.

Quebec’s rate of increase of COVID-19 cases is staying stubbornly high at four per cent, mirroring that of Ontario. By contrast, the other provinces that are going forward with re-opening plans are posting increase rates at least half that of Quebec. New Brunswick, for instance, hasn’t had a new case since April 18.

Saskatchewan, which has a rate of increase of just two per cent, is choosing a far more measured re-opening plan than that of Quebec, starting on May 4 by resuming cancelled medical services, as well as reopening outdoor venues such as golf courses and parks. It won’t even think about reopening select businesses until May 19.

It emphasizes that it will be monitoring data to ensure that its health system “has enough capacity to test, isolate and treat every case, as well as trace every contact” and “outbreak risks are minimized in special settings” and preventive measures are established in reopened sectors.

In Quebec, by contrast, Legault has focused publicly on one particular criteria, the number of COVID-19 deaths in Quebec. Specifically, he points out that 97 per cent have been of those 60 and older, and says that, if seniors’ residences are excluded, then the death rate has stabilized. 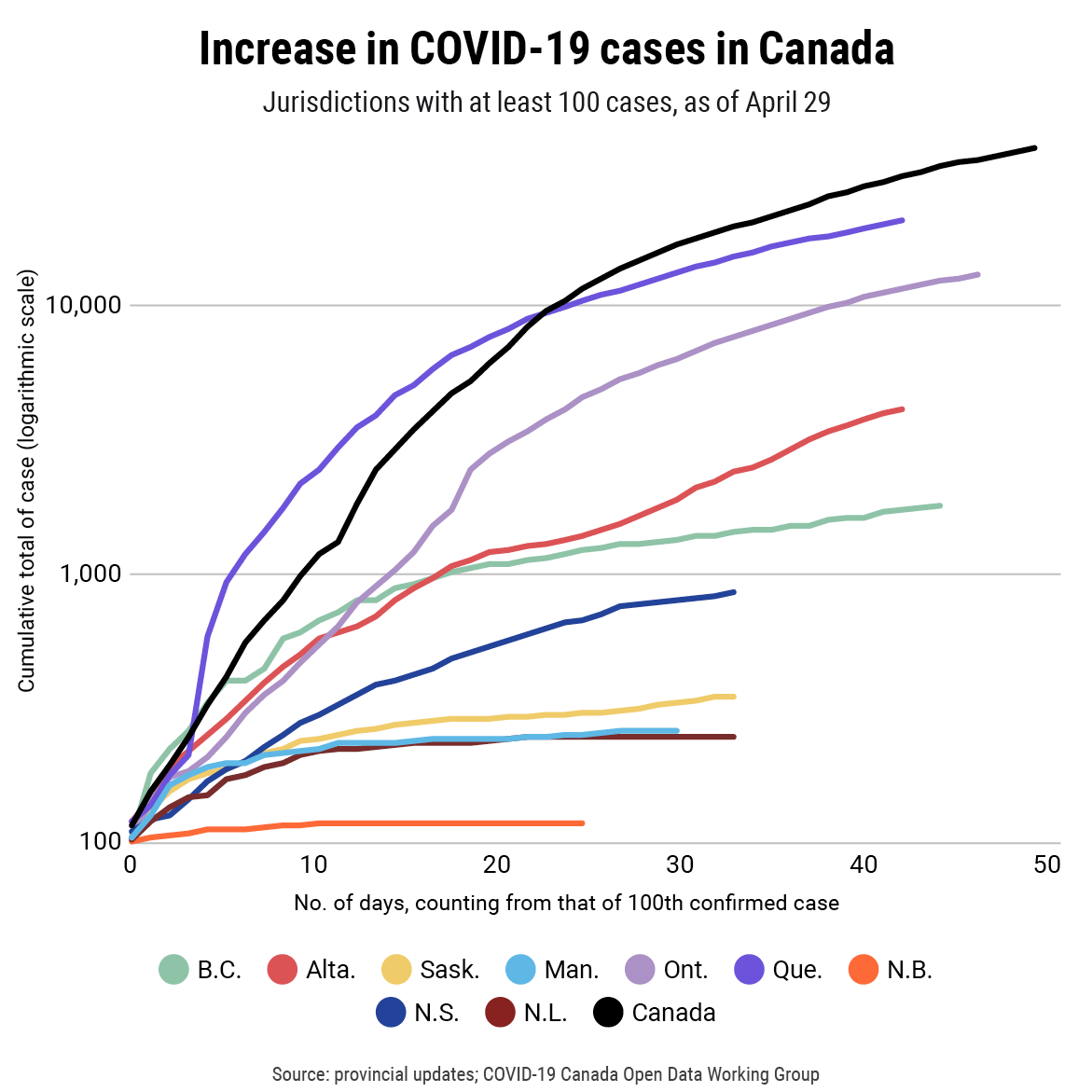 Yet, deaths aren’t the only factor, as even Arruda acknowledges. In particular, Quebec needs to increase its testing rate so it can quickly identify new outbreaks. And that’s a problem, because the province’s testing rate has dropped recently. Right now, it’s just above 4,250 tests a day, a far cry from the 15,000 to 20,000 daily tests that Arruda says is necessary for the province’s reopening schedule.

Also unclear is the extent of community spread of the virus outside of long-term care settings. Aaron Derfel of the Montreal Gazette, who publishes detailed Twitter threads tracking and analyzing health care measures, did some rough calculations that point to more than 1,000 such cases. It isn’t helped that the city’s chief public health officer hasn’t held a press conference since April 16.

Of particular concern is the reopening of the educational system. Legault has given a list of reasons why it’s fine for children to return to schools and daycare, saying the risk is minimal, the COVID-19 crisis in hospitals is under control and public health experts have signed off on the plan.

But just how the government is measuring the hospital situation isn’t clear, especially in hard-hit Montreal, where COVID-19 cases among seniors has resulted in lots of admissions. CBC reports that Maisonneuve-Rosemont Hospital, one of the city’s facilities dedicated to COVID-19 patients, has outbreaks in eight wards. Its emergency room occupancy is at 113 per cent and it stopped accepting patients. It is one of five area hospitals that have ERs that are over capacity, while another four are nearly full, Derfel reports.

Noticeably, the premier is no longer talking about “natural immunity,” which he raised last week by suggesting children infected with the coronavirus could boost the overall immunity of the province.

That idea was soundly and publicly rejected by experts, including the province’s own Institute national de santé publique as well as Dr. Theresa Tam, Canada’s chief public health officer, who was clear that they don’t yet have the scientific evidence to conclude that the antibody reaction of people exposed to this brand-new virus offers lasting immunity. The concept “is actually not something that should be undertaken,” she said on Saturday. Public health experts are concerned that children will spread COVID-19 to teachers, other school staff, parents and then the rest of society, putting even more pressure on Quebec’s hospitals.

“It is a matter of risk evaluation,” Legault said. “Nothing is perfect, nothing in life is 100 per cent, but we calculate, with the help of public health, that it’s better for children to return to school.” On Tuesday, Ontario Premier Doug Ford was decidedly negative when asked whether his province would adopt Legault’s school reopening plan: “I’m not going to put our children in a crowded classroom, I’m just not going to do it.”

Legault is a former businessman and it feels like he’s treating this like a new business proposition. Except if a business concept goes wrong, all people lose is money. This time, they lose lives.