Will the pandemic force Canada to embrace online eye tests?

An online tool temporarily approved in the U.S. allows people to update their eyeglass prescriptions from home. Now a Canadian company is pushing to offer the service here. 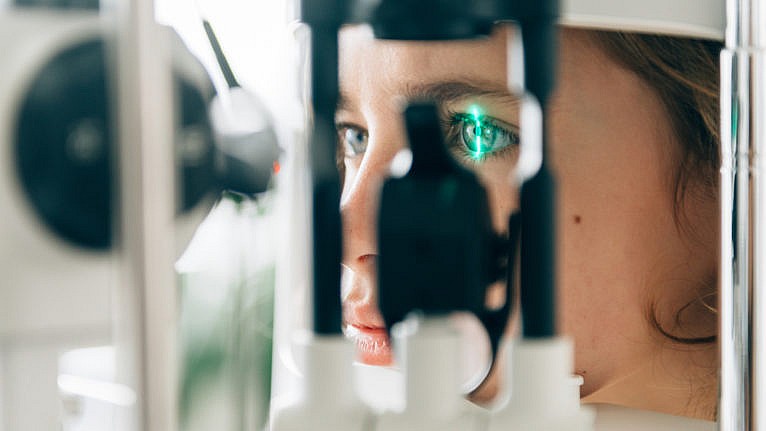 Full check-ups will still require a visit to an optometrist, but digital players are jockeying to provide standard vision tests online (iStock)

Getting new eyeglasses during the pandemic has been an unattractive prospect for Canadians anxiously guarding their health, or their spare time. A conventional, in-person visit with an optometrist typically entails an examination in a small, enclosed space, followed by an appointment-only trip to a shop—perhaps in a half-shuttered mall, mask required—to try on frames that must be cleaned after each customer touches them.

Eyecare professionals have scrupulously adhered to guidelines around social distancing, masking and cleaning. Still, many lens-wearers are choosing to forego the bother and stick with their outdated glasses. Even before the province’s latest lockdown, the Ontario Association of Optometrists reported patient volumes were down 50 per cent.

Canadians are still buying glasses, of course. They’ve just gone digital more quickly than the sector itself. Until 2010, it was illegal in Canada to sell prescription eyewear online; that’s when B.C. deregulated the business, prompting digital entrepreneurs to start shipping glasses and contacts from that province to much of the country.

To make use of that service, you must still go in person and get a doctor’s prescription—but that too may soon change. Online optical exams pioneered in the United States—where so-called “digital acuity products” have been temporarily approved by the FDA during COVID—are popping up online in Canada, despite their murky legal status here. One B.C company has partnered with Visibly, an American firm operating in the U.S. under provisional approval. Vancouver-based KITS says it hopes to bring online eye exams to Canadians, allowing consumers in this country to get updated prescriptions, as opposed to mere renewals, from the comfort of their homes.

Whether it can do so legally isn’t clear. Vision care in Canada is regulated at the provincial level, by colleges of optometrists. But none offers a process to approve the services of a company like KITS. Joe Thompson, the company’s founder, says it hopes to “partner” with Health Canada before launching, but has not yet had discussions with the federal department.

I tried a beta version of the KITS test, which requires a computer, a smartphone, any standard-sized credit card as a makeshift ruler and three metres of floor space. After using the credit card to calibrate font size and maximizing the screen’s brightness, the site asks for a shoe size. “Take 12 heel-to-toe steps,” it says, then declares: “You’re in the right spot for the exam.”

From there, the test is not entirely unlike reading from an eye chart in a doctor’s office: the screen flashes a letter backwards, sideways or upside-down while the user types multiple-choice answers into their phone, which is synced up via text message. Positive encouragement comes via audio in a soothing voice. (“Good job! We’re moving along nicely.”) From start to finish, the test took me six minutes.

It seems impressively efficient, but as with many digital innovations, the full implications have yet to be seen. On one hand, it offers a level of convenience homebound Canadians have come to expect during the pandemic. Yet it’s also raising concern among eye doctors about what services can and cannot be safely provided over the internet.

Though the Canadian Association of Optometrists has for years warned consumers about the safety of online eye exams, the laws surrounding tele-optometry—especially during COVID—are in flux. In 2019, the College of Optometrists of Ontario lost its bid to the Supreme Court to prohibit Vancouver-based Clearly Contacts from dispensing glasses and contact lenses in Ontario using an existing prescription. At the debate’s core, says College President Patrick Quaid, is a continuing tension between eyewear as a medical device and as a commercial commodity. Even he sees both sides: “As a doctor and a regulator, I cringe,” Quaid says. “But as a consumer, now more than ever, I understand.”

There’s much more to a full eye exam than many people understand, he says. “Do you know how many visual skills you need to function as a human? Fifteen. Visual acuity is just one of them.” Others include depth perception, eye tracking and convergence, none of which can be measured online—yet. Other components—eye drops to dilate pupils, the “puff test” that measures ocular pressure—seem impossible in anything but an in-person setting.

“Our vision test is not a comprehensive health exam,” reads KITS’ disclaimer, which pops up often. The test repeatedly reminds users that health problems,  eye conditions, discomfort or medications that affect vision all require a visit to a doctor. “We recommend you do a full eye exam every five to 10 years,” says KITS’ founder Joe Thompson, “but for someone who can’t or doesn’t want to go into the office right now, or someone who just wants to check in and reorder, this is a great alternative.”

For procrastinators, though, digital exams could exacerbate bad habits. “If you roll in five years later because you finally need your doctor,” warns Dr. Quaid, “they could measure your eye pressure, turns out you have glaucoma and the vision you’ve lost won’t come back.” Despite all his expertise, up to five per cent of Dr. Quaid’s patients return complaining of glasses that aren’t quite right. A wrong prescription can cause eyestrain, headache, dizziness and nausea. An American study from 2011—admittedly a lifetime ago in tech years—found almost half of glasses bought online didn’t meet patients’ optical requirements. To Quaid, KITS’ promised 100 per cent satisfaction guarantee is a logistical nightmare in the making.

Still, COVID-19 has accelerated every industry’s move toward e-commerce, and eye care is no exception. “Unlike contact lenses, which everyone buys online, glasses were lagging behind, just because we hadn’t developed the tools,” says Thompson.

So alongside virtual try-ons and customized online fittings, digital eye exams will soon be a tool the field will have to address. “We’re hoping optometrists will be happy to partner with us,” says Thompson. And here, Dr. Quaid concurs: “Lots of doctors want to do more doctoring and less selling.”