You’ve been breathing all wrong

Hey mouth-breathers! Use your nose to boost your immune system, your circulation, your mood and even your sexual functioning 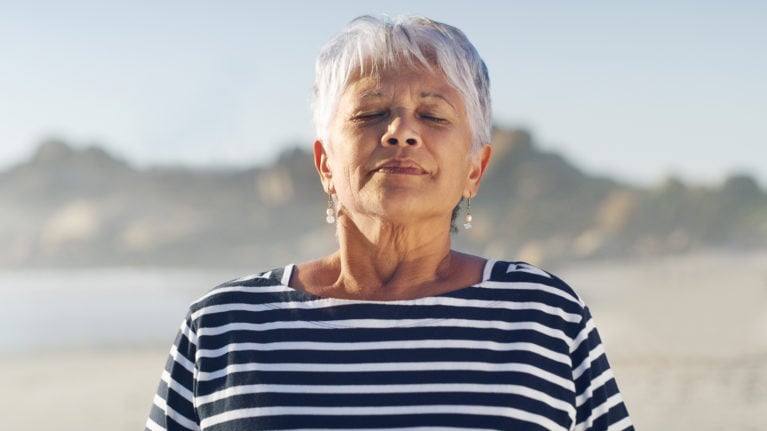 It almost feels like foreshadowing when, early in his new book, Breath: The New Science of a Lost Art, James Nestor describes having a long implement stuck deep into his nasal cavity for the purpose of extracting a culture. Today, many readers will have had a similar experience, or can expect to in the near future. But two years ago, Nestor wasn’t being tested for COVID-19; he was part of an experiment at Stanford University looking at how much damage might be caused if a person were to breathe exclusively through their mouth for 10 days (after the snot was procured, Nestor’s nose was sealed tight with silicone plugs and surgical tape). The abridged version of the study’s results: quite a lot. Nestor’s blood pressure rose by an average of 13 points, he had 25 apnea events (which amount to mini-choking episodes) while sleeping and a diphtheroid Corynebacterium (which can lead to infection and disease) had settled into his face. And he felt and looked like . . . well, you know.

This is the book’s biggest takeaway: Breathe through your nose. Nasal breathing boosts our immune system, our circulation, our mood and even our sexual functioning. It triggers the sinuses to release nitric oxide, a molecule that plays an essential role in delivering oxygen to our cells—we can absorb 18 per cent more oxygen breathing nasally than we do by breathing orally. And yet, Nestor writes, “around half of us are habitual mouth-breathers” on account of the ways the human skull has evolved over the last 300,000—and especially the last 500—years. This, says Nestor, was the biggest surprise in his research: how our jaws and teeth went into semi-retirement when processed food became the staple of our diet with the onset of the industrial age. Essentially, our faces caved in: our mouths shrunk, our nasal passages became more constricted and our airways suffered the shortfall. “Even if we want to breathe properly, so many of us are so messed up anatomically now that it’s a real struggle,” Nestor says in a phone conversation from his home in San Francisco.

He should know. About 10 years ago, the author was in rough shape, respiratorily and otherwise. “I had a job that was completely stressing me out. There were some relationship issues I was dealing with, and I had bought a house that was built in 1885 and basically falling apart.” At one point, he was washing dishes in his bathtub. He was also coming down with repeated bouts of pneumonia and bronchitis. On the advice of his doctor, he enrolled in a breathing class and found himself sitting cross-legged on the floor of a dusty, drafty old Victorian—a place “that looked like something out of Amityville.” A voice on a cassette tape instructed him and three or four other participants to inhale and exhale slowly through their noses, over and over and over. Though he was skeptical, Nestor settled into the exercise, and when the tape ended, he was drenched with sweat. Over the next few days, his sleep improved and his stress level went down.

As a journalist, Nestor’s curiosity was piqued. He filed the experience away until he travelled to Greece a few years later to report on the world of freediving (which he wrote about in his first book, Deep: Free­diving, Renegade Science, and What the Ocean Tells Us About Ourselves). “I remember sitting on the bow of a boat a mile off the coast and watching [a diver] take a breath, completely disappear into the water and come back five minutes later,” says Nestor. The divers described having practised breathing techniques to train their lungs so they could submerge 300 or 400 feet underwater for minutes at time. “All of these people had these huge chests, huge lung capacity,” he says. “And I just thought, ‘Wow, what else can we use this ability for?’ ”

Thus began his project. Nestor read reams of scientific studies; he surveyed ancient Chinese texts; he followed anonymous “cataphiles” into unsanctioned rooms in the tombs below Paris; he travelled all the way to São Paulo to learn about ancient Yôga (pronounced yooga) breathing techniques. He offered himself up as a subject numerous times, the most dramatic of which found him in a tiny windowless laboratory in Tulsa, Okla., huffing carbon dioxide from a foil bag attached to a “beat-up yellow cylinder that [looked] like a Cold War-era Russian missile,” feeling like his throat was closing. This type of therapy has historically been used to treat people who suffer from severe disorders such as panic attacks, epilepsy, schizophrenia and anorexia. It is not among the breathing techniques that Nestor recommends trying at home.

READ: Why Theresa Tam changed her stance on masks

Nestor did not set out to write a guide to breathing; he was more interested in discovering what happens physiologically when we alter our breathing. Still, the titles of several chapters read almost like shorthand instructions: Exhale. Slow. Chew. Hold It. And Nestor skilfully explains both science and method: why breathing deeply puts less stress on the heart; why humming is good for you (also, gum); why inhaling for 5½ seconds and then exhaling for 5½ seconds might just be respiration’s magic metric. He challenges Western medicine’s philosophy of breathing. “[It is] looking at pathologies associated with breathing—lung conditions, emphysema, cancer—not healthy, optimum breathing,” says Nestor. “The thinking is, get breath into our bodies, and our bodies are going to figure it out from there. You don’t need to pay attention to how much is coming in or how often. And what I found from talking with various leaders in the field is that is completely wrong. How we breathe is as important as what we eat, how much we exercise, whatever genes we inherit. It’s that vital.”

The book features a coterie of what Nestor calls “pulmonauts”—people (mostly non-medical) who “stumbled on the powers of breathing” while trying to help themselves or others. Some of their stories strain the reader’s credulity: Katharina Schroth, for example, a German teenager diagnosed with scoliosis at the turn of the 20th century who developed a complex method of breathing and stretching through which she effectively “breathed her spine straight again,” Nestor writes. Or Carl Stough, an American choir conductor who, in the 1950s and ’60s, used his insight into the mechanics of the diaphragm to treat emphysema patients with unconventional techniques such as massaging a patient’s neck and throat while having them repeatedly count to five. Or Konstantin Pavlovich Buteyko, a Ukrainian physician who, after being diagnosed at age 29 with such a severe case of hypertension that doctors gave him a year to live, developed a protocol called “Voluntary Elimination of Deep Breathing,” which included taping tennis balls to pneumonia patients’ backs so they would lie on their sides. All were accused of quackery; all eventually saw their work embraced by the medical community.

READ: Footprints of the coronavirus: How it came to Canada and went around the world

Nestor also delved into what he calls “the outer limits of breathing,” spending time with disciples of an ancient Buddhist practice known as Tummo, or inner fire meditation. This involves a system of heavy hyperventilation for several minutes followed by a sequence of holding the breath for 15 seconds at a time, as well as periodic exposure to cold. It has something of a global profile thanks to Dutch extreme athlete and Tummo devotee Wim Hof, who has set records for swimming under ice and running barefoot on snow. The idea is to trigger the sympathetic nervous system, which puts you on high alert. “It purposely stresses your body out,” Nestor says. “You are controlling the knob on your own body. You breathe like crazy for 20 minutes. You’re just going for it. You’re holding your breath and then you’re doing it again. But then the other 23½ hours of the day you’re so completely relaxed.” We need to reset this balance because modern life has our nervous systems confused, Nestor explains. We’re not running from lions and tigers and bears anymore, but neither do we ever quite relax, not sleeping well at night, not settling into focused work during the day.

Nestor’s Tummo instructor, Chuck McGee III, was diagnosed with type 1 diabetes in his 30s and soon began suffering from chronic back pain, anxiety, depression and high blood pressure. He was on a cocktail of medications that included Valium and four or five ibuprofen a day, but nothing seemed to help. But after trying Tummo, McGee was able to wean off his hypertension medicine, went down to one or two ibuprofen a week and reduced his insulin intake by 80 per cent. “Doctors say this is more pseudoscience than science, and there’s no way any of this can be true,” McGee is quoted as saying in Nestor’s book. But thousands of people describe similar improvements. And it goes beyond reporting an alleviation of symptoms, Nestor points out: they have blood work showing that their C-reactive proteins—an inflammatory marker that reflects the severity of conditions like rheumatoid arthritis, psoriasis and eczema—dropped 40-fold within two weeks of adopting the breathing exercises and cold exposure that comprise the Tummo method. Nestor himself still practises, participating in McGee’s free online weekly sessions.

Breathing techniques have their limits. They can’t dissolve a blood clot in the lung or kill cancer cells. They can’t stop a pathogen from infiltrating our respiratory tracts. When asked whether they might help a person fight the coronavirus, Nestor demurs. “I do not want to get into that too much. I don’t know the particulars of it,” he says. “What I do know is that the stronger your respiratory health is, the better you’re going to be able to fight this thing.” Nestor has watched with interest as treatments that mirror those he studied—increasing nitric oxide delivery to the body’s cells (which is achieved through nasal breathing) or laying people on their sides rather than their backs—are being adopted in an effort to treat patients with COVID-19. And he’s talking to his pulmonaut friends more than he did even while writing the book. “I got really deep into this world. I became a little obsessed about it,” he says. “But it continues on. And I’m loving these conversations, and putting all these pieces together. I’ll probably revise the paperback with the science of what’s happening now.”

This article appears in print in the July 2020 issue of Maclean’s magazine with the headline, “You’ve been breathing all wrong.” Subscribe to the monthly print magazine here.