Height makes right in the NHL 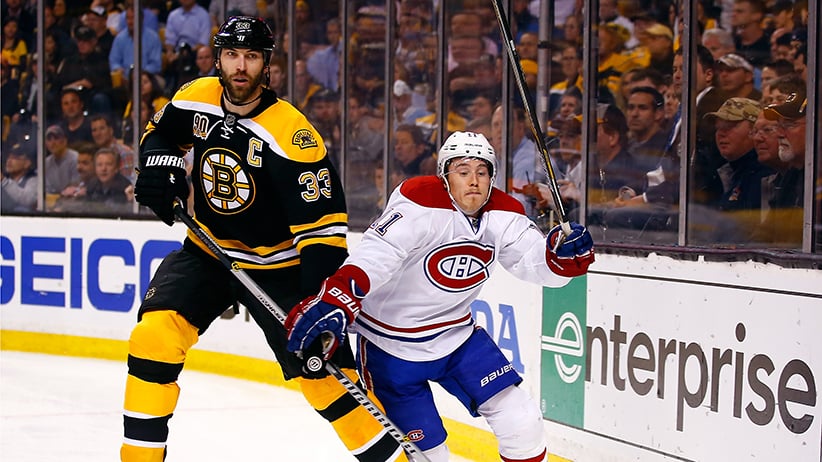 Jamie Oleksiak’s rise to the NHL has been steady, but sometimes painful. The year he turned 14, he grew about four inches—a spurt that left him wracked by random aches—and, by the time the Dallas Stars drafted him in 2011, he stood six foot six. He’d gain another inch by the time of his two-year stint with Dallas’s American Hockey League affiliate in Cedar Park, Texas, and vividly recalls the misery of getting the middle seat on cross-country flights. “We’d go commercial,” Oleksiak recalls, and then he draws his hulking, tattooed body into a convincing impression of a man hiding behind a phone pole. “You could spend a few hours squished like this.”

Small sacrifice, in retrospect. At 21, Oleksiak has carved himself a full-time spot in Dallas’s defensive corps, his ice time rising as he gains the trust of his coach, Lindy Ruff. The rambling frame he sometimes felt he’d never quite grow into—“As a young guy, you just can’t skate and move the puck as fast as the smaller guys”—has become an enormous asset. While holding position at the side of the net, Oleksiak can reach across the 11 feet of ice behind the goal line with his 68-inch stick, checking opponents as they try to make plays from behind the net. He’s learned to use his 250 lb., much of it gathered around his hips and thighs, to keep powerful forwards at bay. “We call it ‘assing’ guys out,” he says matter-of-factly. “There are a lot of advantages to be had.”

The NHL could see profound changes in 2015, from the arrival of superstar-in-the-making Connor McDavid to a salary cap under pressure from a dwindling Canadian dollar. But few will be as plain to the naked eye as the invasion of giants like Oleksiak. The Toronto-born blueliner joins a wave of skaters coming into the league who would not look out of place on an NBA court (average player height: just over six foot seven), and whose influence on a much-scrutinized sport is not yet understood. On defence, there is Andrej Sustr of the Tampa Bay Lightning (six foot eight) and Tyler Myers of the Buffalo Sabres (six foot eight). At forward: Brian Boyle of the New York Rangers (six foot seven) and Nick Bjugstad (six foot six) of the Florida Panthers. Goaltenders are getting bigger, too. Tampa’s Ben Bishop set a new height record for the position at six foot seven, but doesn’t stand out as much as you’d think. Seven NHL netminders are six foot five or taller, and each of the current top five, ranked by wins, stands above six foot two.

The net-covering benefits of plus-sized goalies are obvious. But most of the supersized skaters can be considered successors of Zdeno Chára, the six-foot-nine Slovak who, in the early 2000s, overturned decades of skepticism about the adaptability of super-tall men to the demands of hockey. Chára played with as much poise as an adolescent giraffe during his early days with New York Islanders, who traded him in 2001 to Ottawa. There, at age 25, he put it all together during a breakout season, smothering opposing forwards, scaring off marauding opponents and enlivening the Senators’ power play with his 164-km/h slapshot (or, at times, by parking his massive self in front of the opposing goaltender). After signing as a free agent with Boston, Chára went on to become the most dominant defenceman of his decade.

His success touched off a gold rush for the mighty tall and talented—creatures once as rare as unicorns. Last June, NHL general managers picked 26 players at the entry draft who stand six foot four or taller. Nine of those players were six foot five or taller, while one was six foot six and one was six foot seven. The previous draft saw an even greater case of size fever: Fully 14 players chosen were taller than six foot five, and seven were above six foot six. 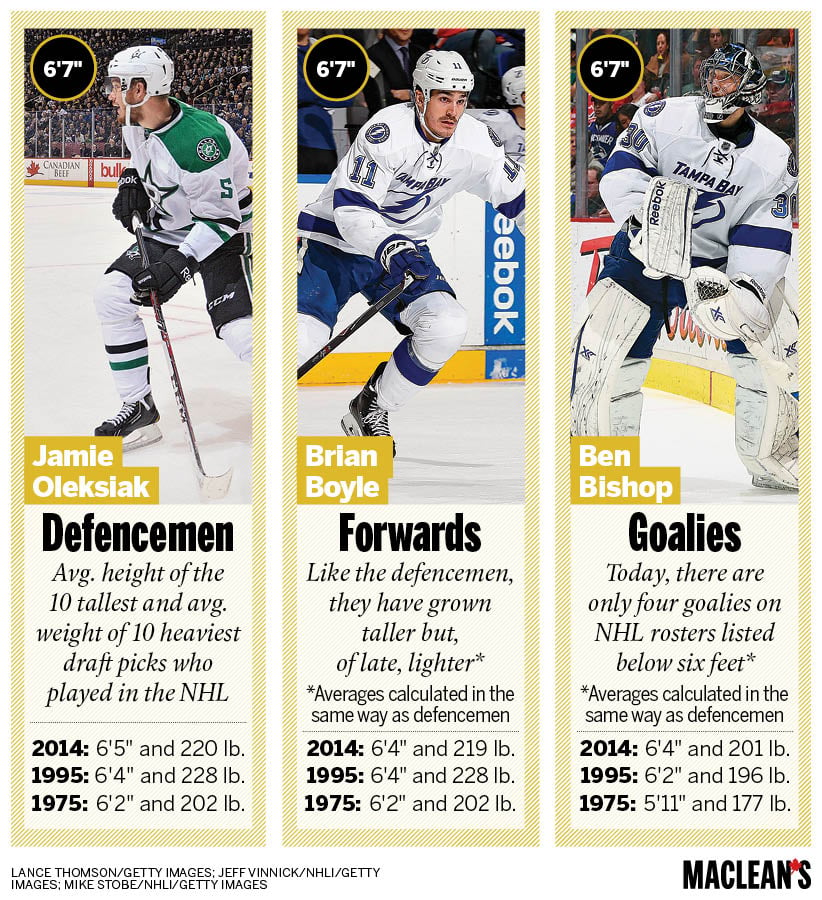 Where are they all coming from?

Dennis MacInnis, director of scouting for International Scouting Services, based in Guelph, Ont., speculates that hockey is winning over tall and gifted athletes who, in the past, might have gravitated to other sports. Several of the big boys making their way into the NHL, he notes, hail from the U.S., where football, in particular, has suffered bad press of late. Meantime, teams seem increasingly willing to invest the extra time necessary to get tall players NHL-ready. “Even the ones who are coordinated for their size and age take a little bit longer to pull it all together,” says Tim Bernhardt, who was the top scout in Dallas when the Stars took Oleksiak 14th overall.

Now the Arizona Coyotes’ head of scouting, Bernhardt notes a growing number of the big men playing as forward, suggesting NHL ice will soon resemble a sequoia forest. But that doesn’t mean hockey will revert to a contest of lumbering giants, he hastens to add. “The game is also developing speed and quickness,” he says. “The big guys are part of a phase in the development of the game, but you still see a lot of small, fast guys coming into the league, too. Any size of player can help you win, and I think there’s room for all of them.”

FILED UNDER: Hockey NHL year ahead