Photos with captions by Feschuk: All the highlights, and also that part where the nurses danced

Clocking in at three hours and 45 minutes, the Opening Ceremonies of the 2012 Summer Games featured many remarkable moments and tophats. Here’s a selection of just a few of the images that captivated the world when the world wasn’t busy asking, “Did they seriously just play a song by Frankie Goes to Hollywood?” 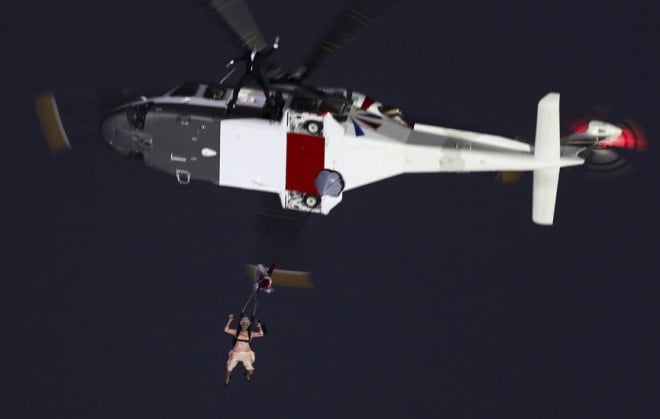 This moment marked the conclusion of an extended bit in which James Bond (played by Daniel Craig) and the Queen (played by the Queen) rocketed toward Olympic Stadium in a helicopter. Left unsaid, but nevertheless widely assumed, was the Queen bailed out because 007 just would not stop tongue-kissing her. 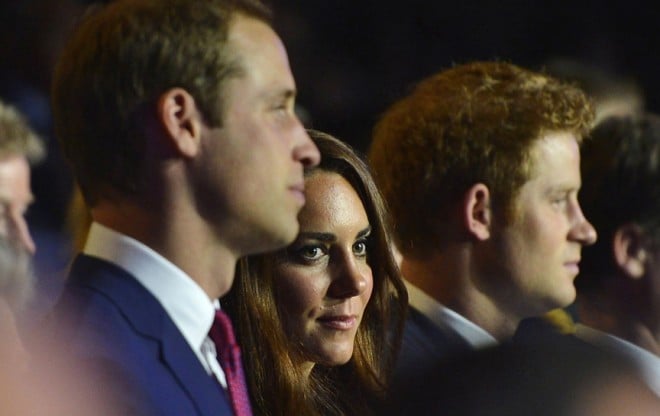 Her “not amused” face is really improving. 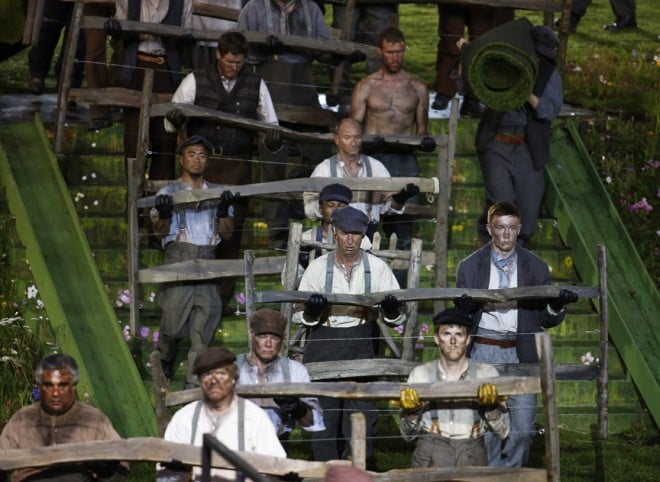 Bad news, guys: the era of agrarian dominance has reached an end. Let us all now lift fences glumly! 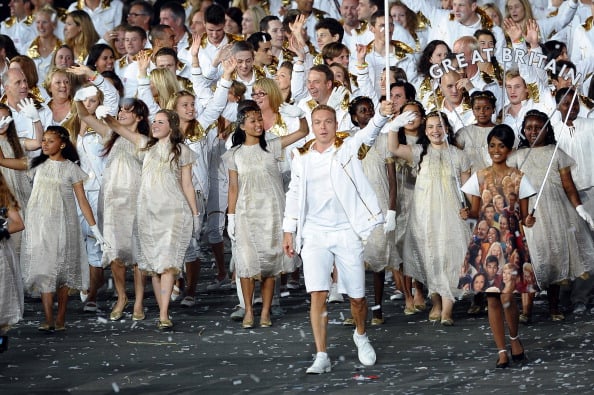 In a clever bid to ensure a handy supply of quick energy, British athletes sewed chocolate bars onto their shoulders and into their armpits. 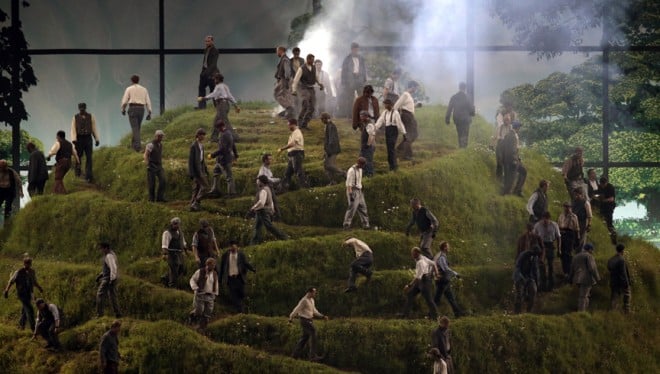 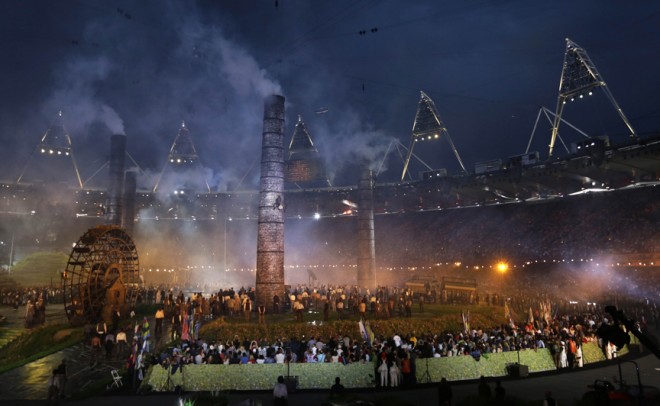 It’s still pretty hard to believe that when members of the IOC cast their ballots to choose the host of the 2012 Games, they picked Mordor over Paris. 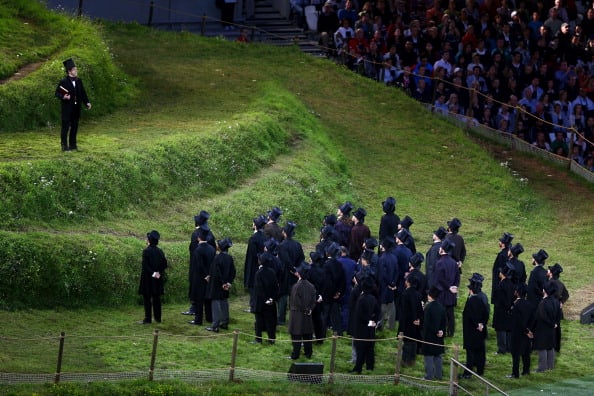 Some people said they were confused but it seemed pretty obvious to me: The tophat invented the industrial revolution which invented the Olympics. Duh. 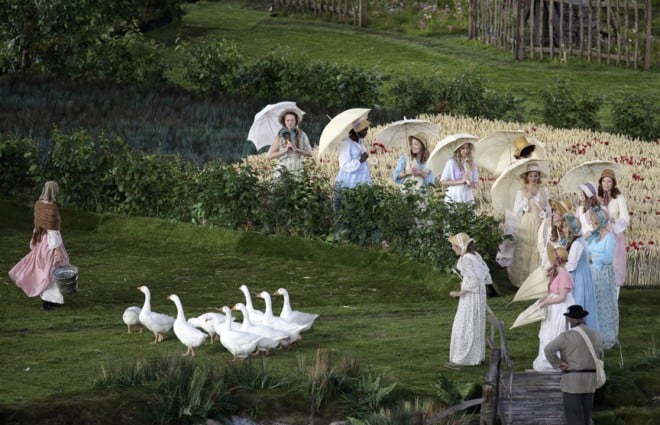 I’m on record as being a fan, but the Opening Ceremonies was a weird time to launch the third season of Downton Abbey. 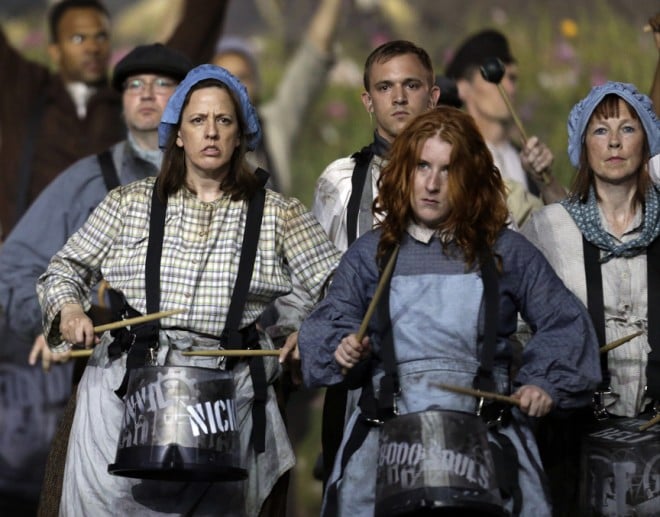 Learning about the Industrial Revolution was really interesting and everything, but how about next time we go with A Comprehensive History of Skimpy Beach Volleyball Attire? WHO’S WITH ME?? 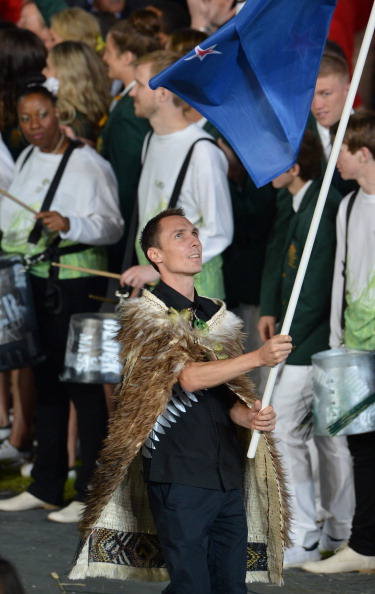 Controversy was kindled when the flagbearer for the New Zealand team unexpectedly entered the stadium wearing the pelt of Chewbacca. 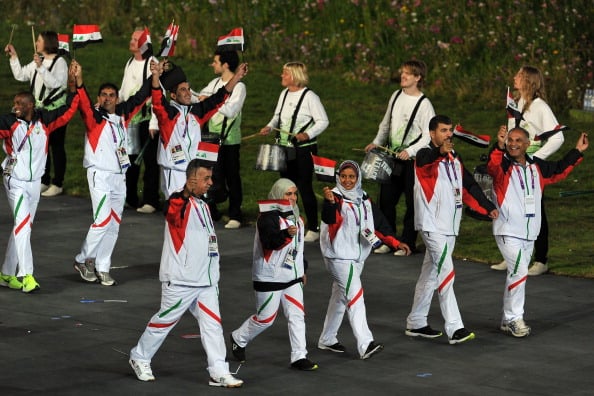 Iraq’s athletes were all happy to be representing and not currently in Iraq. 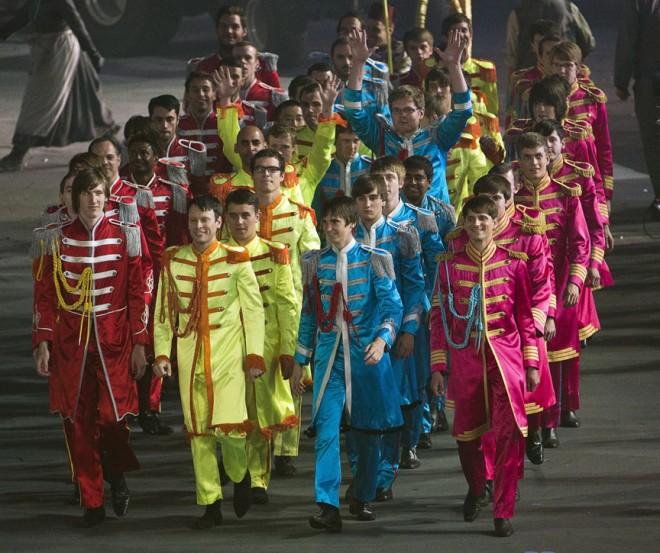 Welcome to the Hard Rock Cafe. Can we take your order? 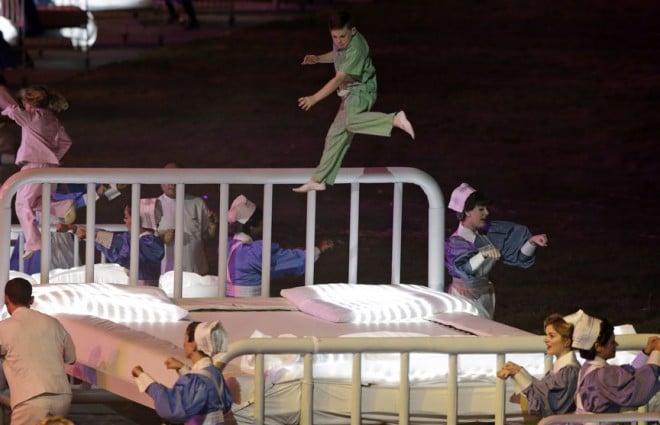 If nothing else, the ceremony conveyed what a blast it is to be a horribly ill child in a British hospital! 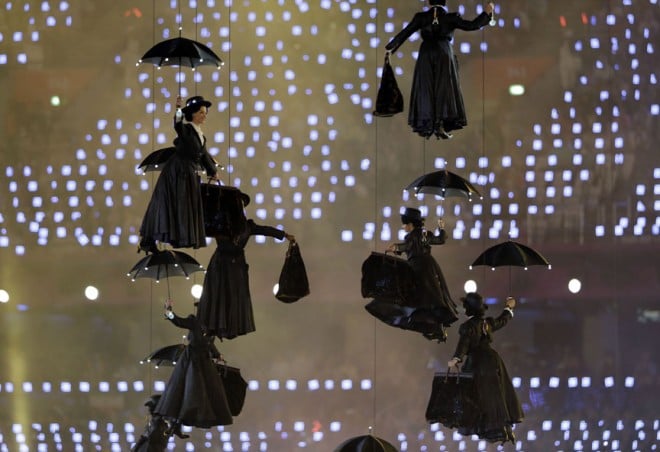 These 30 Mary Poppins descended to the stage shortly after the arrival of James Bond. Producers made the tasteful decision not to show the ensuing 31-way. 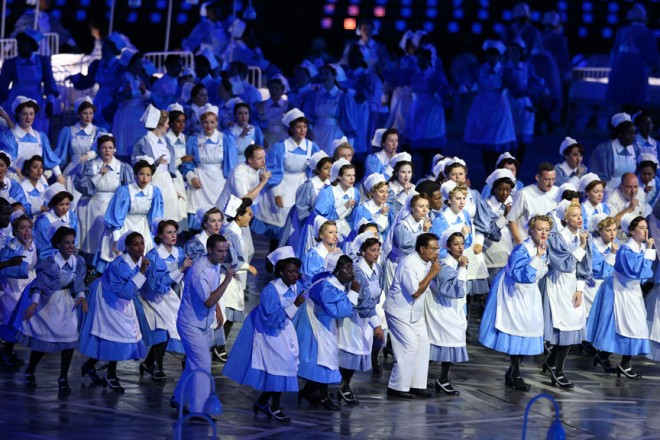 By tomorrow, this image will appear in a Mitt Romney TV ad attacking the evils of Obamacare: Socialism leads to choreography! 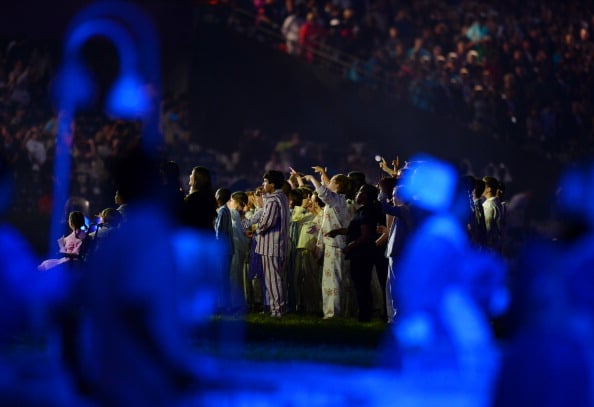 They probably thought getting deaf kids to sign the national anthem would stop anyone from making fun of them. NICE PJs, NERDS. 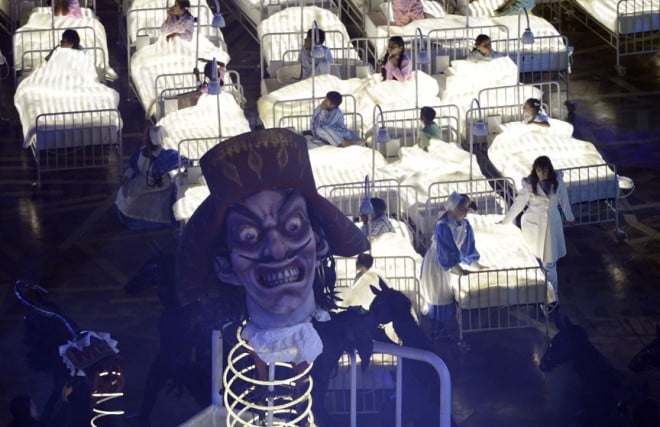 It was right about here that many of us began to suspect this entire ceremony was being imagined by the lead character in Trainspotting. 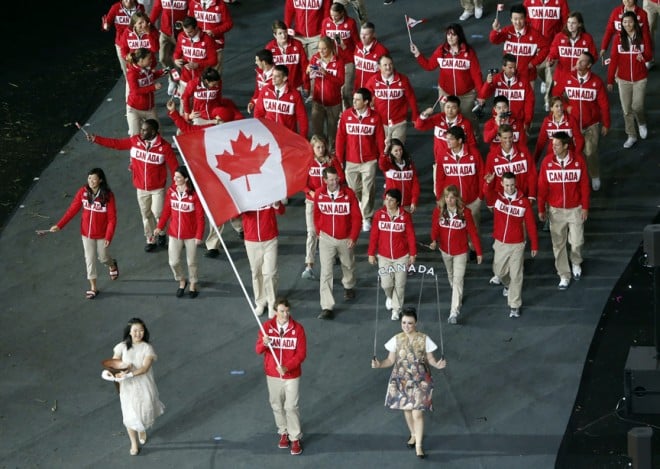 Some have criticized the Canadian Olympic team’s choice of apparel, but let’s not forget it was London’s decision to hold the Ceremonies on casual Friday. 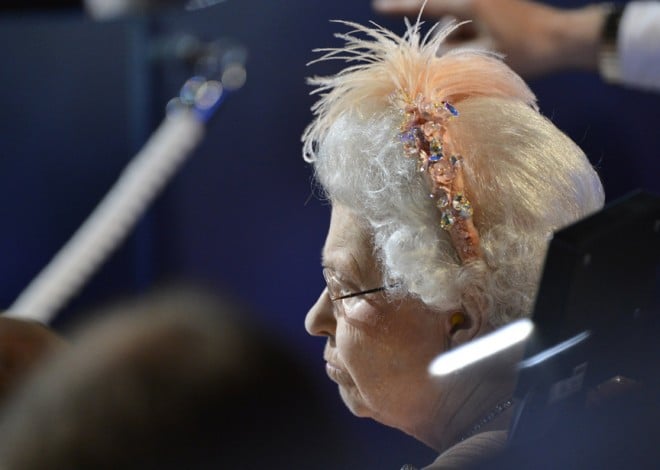