By age 13 she’d lost nearly all of her sight. But from skydiving to rock climbing, that didn’t stop her. 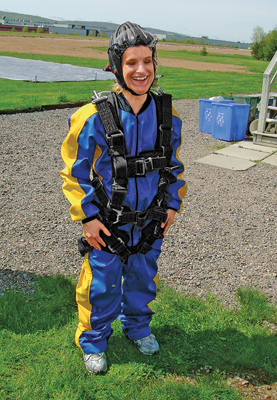 Holly Elizabeth Bartlett was born in Halifax on Dec. 26, 1978, to Wayne, a self-taught carpenter and construction worker, and Marion, a cashier manager. Holly was a second daughter for the Bartletts; older sister Kim was four when she was born, and a third daughter, Amanda, followed in 1981. Holly was born with a condition called microphthalmia, characterized by small, underdeveloped eyes, and was completely blind in one eye, with some vision in the other. She began wearing thick glasses as a toddler and found ways to keep up with her sisters—pulling a stool right up to the TV to play Nintendo, or using her limited light and colour perception to ride her bike.

Holly was a “tiny little thing” (only growing to four foot eleven and weighing under 100 lb.) and had a protector in Kim, who’d offer a piece of her mind to anyone who dared tease her little sister. But “that was her biggest beef with me,” says Kim. “She said it made it worse for her, that she didn’t want to be looked at as different.”

Between the ages of 12 and 13, Holly rapidly lost nearly all of what little sight she had. She was discouraged for the first year or so, says Amanda, but was soon “always the first to crack a joke” about her disability: Amanda recalls Holly teasing her for fumbling a ball at a baseball game by shouting, “What’s wrong with you? Even I could see that!” In Grade 9, Holly attended Sir Frederick Fraser, a school for the blind, where she learned how to safely orient herself using a cane. Meeting other blind students brought out a new confidence in Holly, says Kim. She began to apply herself at school and started taking horseback riding lessons. After a year at Sir Fred, Holly joined her sisters at Prince Andrew High School, and graduated with several awards, including the Walter and Wayne Gretzky Scholarship.

That fall, Holly enrolled at St. Francis Xavier University in Anti­gonish, N.S., bringing along a new guide dog. “We drove her and Willow down, over two hours away from home, and left her there,” says Amanda. “We saw her at Christmas, maybe Thanksgiving. She wanted to do everything on her own.” (Holly did allow for some orientation to the campus with the Canadian National Institute for the Blind, which also helped with having her textbooks translated into Braille.) In her second year, Holly moved off campus with friends, and later travelled to Guatemala and Mexico as part of volunteer research teams. She graduated on the dean’s list in 2002.

Holly next moved on to Ottawa, and began a master’s at Carleton University, but came back home after a year and moved in with a boyfriend she’d met working at a summer job (the relationship ended in 2005). Holly began taking contracts working as a researcher for the Nova Scotia government. The temporary work was challenging, as she had to orient herself to new office layouts with every new job, but Holly was undeterred, even when Willow developed diabetes and had to be retired in 2004. She considered getting another guide dog, but “it was a huge commitment,” says Kim. “If Holly wanted to go anywhere where it’d be difficult for Willow to go, then she’d have to find somebody to watch her.”

Holly “was always trying something new,” says long-time friend Andrew Seely, with whom Holly bought a 13th-floor condo near the water in 2007 (“Great view,” Holly would joke). She began working part-time toward her master’s in public administration at Dalhousie University in 2008, and joined Toastmasters. There she met Kirk Furlotte, who mentioned he was planning to go skydiving: “I hadn’t even finished saying the word when Holly was asking, ‘Can I go?’ ” She completed a tandem jump with a trainer, and came back down to earth with a “smile as wide as her face,” says Kirk. Another friend invited Holly to swing dancing lessons—she can be seen on YouTube twirling around the floor in a 2009 documentary called Sights Unseen. Last year, Holly was hired on permanently with the government, and she had recently taken up rock climbing—in mid-March, she’d scaled an overhang that most sighted climbers can’t manage.

On Friday, March 26, Holly was at a party with friends from Dalhousie, celebrating the end of the school year. She got into a cab at around midnight, and was dropped off outside her condo.

Police believe that instead of walking toward the building, she walked away from it and became disoriented, and then took a wrong step and tumbled down a steep embankment. She was found unconscious under the A. Murray MacKay Bridge early Saturday morning and was rushed to hospital, but died from her injuries on Sunday morning, surrounded by her family. Holly was 31.

FILED UNDER: microphthalmia the blind