Kelly McCrimmon may be propelling the Brandon Wheat Kings to success, but he credits fans and his late big brother, Brad 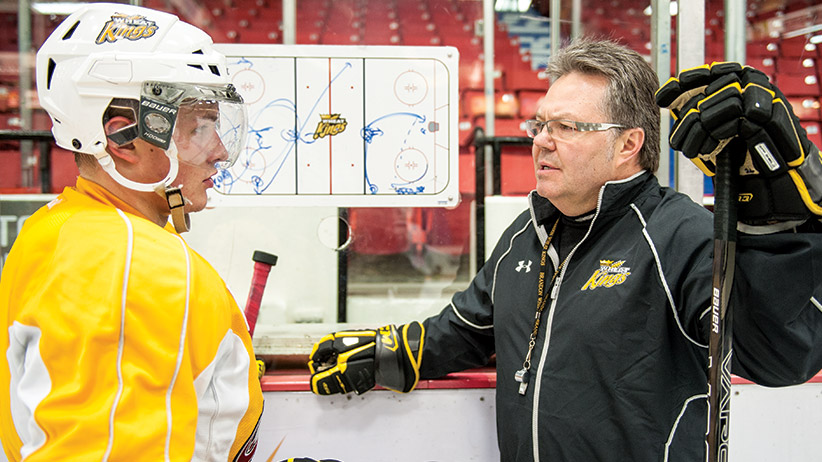 Hometown Hockey, with host Ron MacLean, will stop in 25 towns across Canada throughout the next year. This week? He’s in Brandon, Manitoba. The show airs on Sunday on CityTV. For more, visit HometownHockey.com.

The only time Brad McCrimmon ever left the ice that night was when the referee dragged him off. Lord knows coach Dunc McCallum wasn’t going to do it. Save two minutes in regulation to serve a minor, the gruff defenceman with the marshmallow heart patrolled the blue line for all 62 minutes and 38 seconds of the Brandon Wheat Kings’ painful 2–1 overtime loss to the Peterborough Petes in the 1979 Memorial Cup final. Two long shifts—one before his penalty, one after. “I’d never seen it done to that point, and I’ve never seen it done since,” says McCrimmon’s younger brother, Kelly, also a member of that legendary ’79 roster. “Brad had a lot of stamina, a lot of endurance. To play that much, you have to think the game at a high level and manage your energy.”

The ’79 Wheat Kings’ regular-season record of 58-5-9 still stands as the Western Hockey League benchmark, and McCrimmon was the club’s engine. From the first of February onward, the Wheaties were down a top-four defenceman due to injury. “Brad played 50 minutes a night,” says Kelly. “All through our playoffs, through our league final against Portland, he was rarely off the ice. He’d have different partners and play virtually the whole game.”

When McCrimmon died three years ago in the Lokomotiv Yaroslavl plane crash in Russia, the loss was felt throughout Brandon, where the McCrimmons are synonymous with the Wheat Kings, the only Canadian Hockey League club in Manitoba. Their loyal fan base spills outside the bounds of the city of 50,000 through the southwest of the province to the eastern reaches of Saskatchewan.

Kelly is still with the team. Now 53, he is in his ninth year holding three posts for the club—head coach, GM and owner—and his 26th year in town. In addition to running all aspects of the winningest WHL team of the past 20 years, Kelly squeezed in time to earn his M.B.A. without shirking his hockey responsibilities. A farm boy from Plenty, Sask., who became GM at only 28, Kelly says the long shifts don’t wear him down. “I like what I do, so I don’t consider it a job. It’s a way of life,” he says. “You can only do it if you’re surrounded by real good people. There is loyalty here. I’ve got a lot of trust in the people around me.”

Talk hockey with Kelly and he’ll return to those people, the ones who support the Wheat Kings and the ones whose lives were touched by his big brother. “People he had met [while volunteering] in the Special Olympics or people growing up on the farm. People he’d spent time with,” Kelly says. “There’s a difference between playing professional hockey and being a professional. Brad was always a pro. He always gave back to the game. He felt a sense of responsibility to be that way. He loved people. He loved to have a cold beer, to have a good laugh. Those are things we thought of when we thought of Brad.”