How 1916 set the stage for America to enter WWI

The U.S. greeted the outbreak of the First World War with disbelief, but by late 1916 thousands of Americans were already personally involved in the war 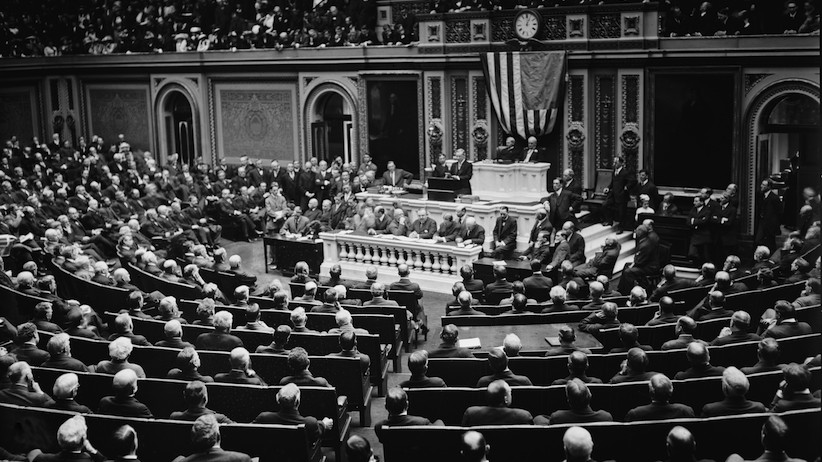 On Nov. 7, 1916, 100 years and one day before Republican Donald Trump was elected president of the United States, his Democratic predecessor Woodrow Wilson was re-elected to the job. Wilson’s campaign unfolded in a manner familiar—then and now, win or lose—to Democrats. He racked up the numbers in big population centres, taking 52 per cent of the overall popular vote, but barely squeaked through the Electoral College. If his opponent, Charles Evans Hughes, had picked up 3,800 more votes of the one million cast in California, the Republican would have won. Plus ça change.

But the victory went to Wilson, meaning that, in the midst of the First World War, the presidency remained in the hands of someone who combined high-minded idealism, absolute insistence on the right of Americans to trade freely with all belligerents (even if it was overwhelmingly with Britain and France), and a barely suppressed inclination to the Allied side. That made his re-election one of the year’s signal moments, according to 1916: A Global History, Irish historian Keith Jeffery’s month-by-month account of the Great War’s hinge year, the year that changed everything.

The U.S. greeted the outbreak of war in 1914 with disbelief and a note of sanctimony, and its press frequently trumpeted the superiority of the New World in its aversion to war. (The newspapers could only do this, of course, by adherence to two American traditions: refusing to equate American punitive attacks on Latin American and Caribbean nations with “war,” and by ignoring the entity to the north, a steadily more significant participant in the war.)

But Canada didn’t ignore America. As early as 1914, Sam Hughes, its flamboyant and profoundly incompetent minister of militia, proposed raising an American Legion from citizens of the republic resident in Canada. London, panicked by the thought of alienating Wilson, quashed the idea. But a year later, as the war’s inexorable logic—the endless need for more men—began to bite, Hughes got the go-ahead, although one of his ideas, a cap badge that would be half maple leaf and half George Washington’s family coat of arms, was still vetoed.

Hughes’S recruiters were supposed to stick to Canada, but unsurprisingly ventured south, where one—described by the press as an “English agent”—was arrested in late 1915. The volunteers were often scarcely better quality. As with all foreign legions (ask the French), many were men with good reason to quickly bolt from where they were—one of Hughes’s was widely rumoured to have been a fugitive general from the Mexican Revolution. Gathered in Toronto, the legion was of disproportionate interest to the chief of police, who described it as “the worst behaved battalion in the city.” The Americans eventually got to Europe in September 1916, where the legion was broken up to replenish existing Canadian units; one volunteer, medical officer Capt. Bellenden Hutcheson of Illinois, won the Victoria Cross in 1918.

By late 1916 thousands of Americans were already personally involved in the war, often in medical organizations—in which over 150 died—but many through involvement in foreign, mostly Allied forces. (Although they both began wartime service after the U.S. entered the conflict in April 1917, those were the respective paths taken by writers Ernest Hemingway and Raymond Chandler.) American factories boomed and American banks grew rich from the expanded production of war material for the Allies, as the British century (the 19th) ended and the American century (the 20th) began. German agents, often aided by Irish republican sympathizers—both shadowed by British spies—were everywhere, desperately trying to sabotage American contributions to the war. On the night of July 30, 1916, a series of enormous explosions tore apart the huge freight terminal on Black Tom Island in New York harbour, killing seven, and destroying more than 900 tonnes of munitions. Thirteen warehouses burned all night, raining shrapnel from subsequent blasts down on firemen. German saboteurs were immediately suspected, although the case has never been fully proven.

Such events and near misses only drove the American elite, strongly pro-British to begin with, closer to supporting open war with Germany. Which, in turn, only drove the desperate Germans, increasingly unable to tolerate American “neutrality” as defined by the U.S.—no troops but massive economic support for the Allies—closer to the fateful decision to return to unrestricted submarine war. In January 1917, after the hinge year concluded, Germany rolled the dice and unleashed the U-boats.