How public libraries are reinventing themselves for the 21st century

Coding workshops. 3D printers. And books. Far from extinct, today’s public library is about access to technology as much as to knowledge 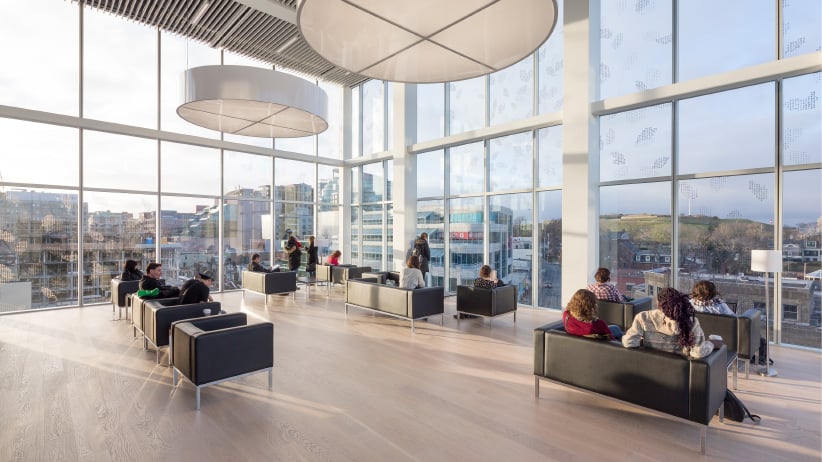 On any given day, in one of the world’s busiest urban library systems, 50,000 people come through the doors of the Toronto Public Library’s 100 branches, while 85,000 make an online visit. The walk-ins bring their coffee and their lunches; they talk and watch TV while charging their phones; they do their homework, often via thousands of computer sessions; they make videos or create objects with 3D printers; take classes in computer coding or yoga; attend author talks or listen to experts offer advice for those looking after elderly relatives; access video tutorials on everything from website design to small business management from Lynda.com (an American online education giant that offers 3,600 courses taught by industry experts). Together with their online fellows, they borrow musical instruments, passes to the city’s art galleries and museums, WiFi hotspots, lamps that battle seasonal affective disorder, Raspberry Pis (small, single-board computers primarily used for coding training), DVDs, more than 12,000 ebooks and—of course—plain old print-and-ink books, a good 90,000 of them every day. All at no cost.

Increasingly—and deliberately—patrons do all this while gazing out through glass walls, both interior and exterior, at supportive local communities that look right back at them. The old clichés simply don’t work with the contemporary library. No, it’s not your grandfather’s library—for Baby Boomers, it’s not even the library of their childhood, let alone the library most predictions imagined 20 years ago. If there was one major player in the past century’s information ecosystem that observers thought would likely be driven into extinction by the new millennium’s digital revolution, it was the public library. Instead, Canada’s librarians have, with remarkable adroitness, turned their institutions into a key bridge over what they call the “digital divide” and an essential community hub in modern urban settings.

MORE: Who cares about libraries?

In Halifax, says Asa Kachan, chief librarian and CEO of Halifax Public Libraries, the new flagship Central Library, with its striking, cantilevered fifth floor, is a point of civic pride. Local entrepreneurs bring potential investors there for a coffee, and realtors tell her it’s a major draw for downtown condo sales. It’s a visible sign, she says happily, of a contemporary city, “of a vibrant intellectual community.” And Nova Scotia’s capital isn’t alone in thinking investing in libraries is a wise use of public funds. After a decade of discussions that led seemingly nowhere, Saskatoon is opening public hearings for its new central branch. In Edmonton, Pilar Martinez, CEO of the Edmonton Public Library, citing “tremendous support” from the city, is watching over the $69-million renovation of its downtown library, slated to be finished in 2020. Calgary’s new $245-million central branch opens this year, while Ottawa’s planned $168-million library is an integral part of the city’s redevelopment plan.

Library systems are tightly tied to their hometowns, both financially—80 to 90 per cent of their funding is municipal—and culturally, meaning they are instinctively as well as practically aligned with urban ideals. “We are a huge part of Toronto’s delivery system,” says city librarian Vickery Bowles, who has been in charge of the Toronto Public Library since 2014. “We are part of its poverty-reduction strategy—putting more resources in branches in particularly at-risk neighbourhoods—and part of its newcomer strategy. Libraries are among the first places immigrants and refugees come to, and some of our branches have federally supported settlement workers.” Martinez’s Edmonton system has settlement workers too, and social workers at three branches: “A lot of clients prefer coming here—there is absolutely no stigma in going to the library.”

In library branches across the country, there is increasing emphasis on community health, from seniors’ isolation to nutrition. Edmonton’s downtown branch has a culinary centre that offers a place to prepare food. In Halifax, says Kachan, “the city has a produce bus, taking good food to places it’s not so easy to come by, and we follow it. We do pop-up libraries where the bus stops, with food-themed books. We have cooking classes.” Hence the welcome extended to those bearing their sustenance with them: anyone who can recall being asked to leave a library when caught nibbling in a corner—here’s looking at you, Barrie Public Library circa 1967—can still be startled by the feel-at-home aura of contemporary branches.

MORE: From e-books to no books

“We’ve rid ourselves of a lot of encumbrances,” says Kachan. “The no-food, no-talking rules, all the barriers that are mysterious for newcomers. If we get this right—and Canadian libraries have been getting it right—we become more valuable to our communities.” So libraries have opened for more hours and more days—and kept the WiFi on when they are closed, so students can access it outdoors in good weather—loaned more out and let more in. “I care more about citizens feeling welcome in the library than about them spilling coffee on a paperback,” says Kachan. “We can always get another copy.”

That’s why library walls today are “porous,” says Martinez, speaking metaphorically about her system’s outreach, and literally made of glass, according to Kachan. “The program rooms have blinds if they are needed, but when they’re not, those blinds stay up and the gathering becomes part of this big, not-closed-off, light-right-through-it public space.”

For two centuries, libraries have been vital public institutions and crucial factors in socio-economic advancement—“bastions of democracy,” in Kachan’s words. But if the 19th- and 20th-century library was about access to knowledge, Bowles says, the 21st-century library is about access to technology, not just acquiring knowledge but creating it. Local responsiveness, like the radon-testing kits Halifax loans out (“a huge issue in Nova Scotia,” says Kachan), is a core value, even on a micro level. Fiona O’Connor, head of Toronto’s glass-walled Fort York branch, tracks what her patrons check out: “I see a huge interest in cookbooks and health and wellness books, and I start looking for programming that matches that.”

But digital inclusion, the impetus behind the coding classes and the 3D printers and the WiFi hotspot loans, matters most, says Bowles, echoed by librarians across the country. She wants her branches to provide the same access to technology that “all the rest of us have” to those who can’t afford it. Libraries have successfully managed two revolutions since the 19th century, Kachan adds. The ﬁrst was when cheaper mass printing “allowed people to actually put their hands on the collections,” browsing the shelves to see what piqued their interest and taking books home. The second is happening now: “If all this belongs to the public, we need to turn it into a trusted resource for a lifetime. So much you could once do in person—getting a fishing licence, say—you now do online. If you don’t have those skills or resources, you’re in trouble. That’s the second revolution: libraries now lend out the means as much as the ends, and we support the learning.”