How safe is sexting?

It’s important to teach teens about the criminality of sexting alongside the topic of consent, and offer guidance, should they choose to do it anyway, according to Planned Parenthood Ottawa 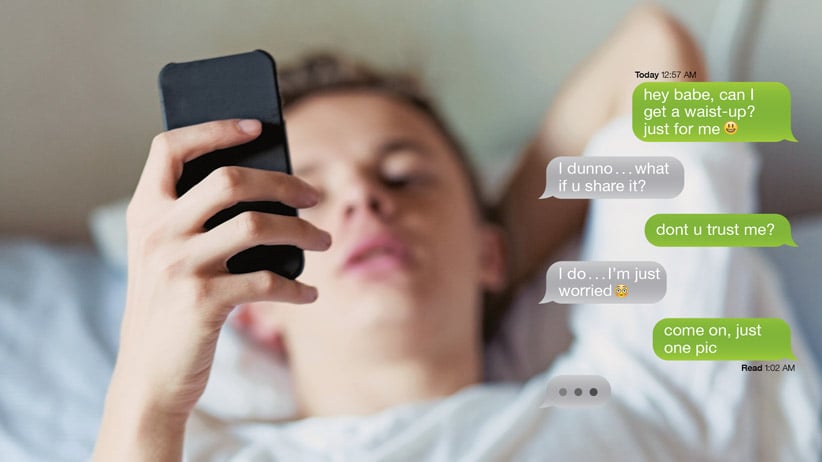 In January 2014, a 17-year-old girl from Saanich, B.C., was found guilty of possessing and distributing child pornography a year after she was caught sexting nude photos of her boyfriend’s underage ex-girlfriend to her friends. The girl, who cannot be named because she was under 18 at the time of the offence, is believed to be the first minor convicted under Canada’s child porn laws. Last year, her lawyer, Christopher Mackie, mounted a constitutional challenge of the conviction. “It is unconstitutional to charge teenagers as child pornographers when what they’ve done has nothing to do with pedophilia or child exploitation,” he told the B.C. Youth Justice Court. He also argued the conviction was unfair, since adults could legally forward sexts—photos or videos—of other adults. [Update: In April, 2016, the teen received a conditional discharge.]

While statistics on the frequency and scope of sexting among Canadian youth are scant, a 2014 MediaSmarts survey on media use by 5,436 Canadian students across the country from Grades 4 to 11 found that 15 per cent of the Grade 11 students surveyed had sent a sext, and 36 per cent said they had received one.

Const. Gen Fareau, from the Ottawa Police Service, who frequently gives presentations at local schools on the dangers of sexting, says many students are shocked when she tells them it can be a crime. “They have difficulty understanding how that’s considered an offence, [even when] it’s something they weren’t pressured in any way to do,” she says.

In an attempt to curb what it calls the “epidemic” of sexting, the Ontario Provincial Police revealed its free “Send this instead” mobile app in 2014. It contains more than 50 preprogrammed “funny and pointed” texts teens can send to rebuff sexy pic requests, such as: “No, but keep taking the selfies. The cops will appreciate you making your own mugshot.”

Related: A mother’s journey through the perils of teen sexting

For Lauren Dobson-Hughes, president of Planned Parenthood Ottawa, it’s important to teach teens about the criminality of sexting alongside the topic of consent, and offer guidance, should they choose to do it anyway. “If you tell youth not to do it, simply that it’s illegal, they hear, ‘Don’t get caught,’ and it doesn’t help them understand the actual risks involved in sexting,” she says. That’s why her organization is taking a risk-reduction approach to sexting in the sex education workshops it provides to young students in local schools upon request. This means accepting that sexting is part of teenage life. “There’s an upside to this, or they wouldn’t be doing it,” says Dobson-Hughes. “We would rather youth talk about consent in an age-appropriate way, throughout their lives, so they understand that sharing a picture without someone’s consent isn’t right.”

In the workshops, they discuss questions young people should ask themselves before sexting, to probe potential risks such as: “How comfortable are you with your partner?” and, “Will the people in your friend circle gossip about this kind of stuff?” More practical tips include ways they can protect themselves from being identified in a sext: Don’t include your face, identifying tattoos or body features, nor recognizable bedsheets. Dobson-Hughes bristles at the notion that Planned Parenthood is encouraging kids to send these sexy images. “That’s not the case,” she says. “Those suggestions are the last line of defence. Youth are better served when they have a safe place to open up and tools to help them navigate these areas in a way that’s realistic.”

Andrea (not her real name), an 18-year-old student from Toronto, says this approach could have prevented a horrible sexting experience she had when she was 14. When a popular boy in her class asked her to send him a topless photo of herself, she reluctantly agreed. “I felt that was the only way I could ever get attention from someone like him,” she says. “Everybody was doing it.” But after he sent her photo around without telling her, and it ended up all over social media, she started getting bullied and harassed by people at her school. “It was really overwhelming. People are calling you a whore, you think everybody hates you,” she says. “I felt anxiety for, like, six months about whether I was supposed to tell my mom. I felt like if I asked for help, I would go to jail, that it would turn out so much bigger.”

Andrea changed schools and the bullying eventually stopped. She formed a group with girls in her new school to raise awareness about slut-shaming and the importance of good education about sex and sexting. Although she says she regrets doing it and won’t sext ever again, she doesn’t tell others not to do it. “There’s no need to villainize it,” she says. “Sexting is just an extension of how people express themselves sexually now. But because it’s new, we haven’t developed ethical codes around it. We have to establish that there are consequences to exploiting a private photograph that someone sends to you.”

For Dobson-Hughes, trying to eradicate sexting altogether is futile. It’s not the photo that’s the problem; it’s what gets done with it and how people’s consent is being violated, she says. “If we are at the point where we’re laying criminal charges, that means we haven’t done enough education.”