How to cook with cannabis and not bake your dinner guests

Guests at a Vancouver trade show got an up-close look at a new frontier of the legal marijuana business: weed cuisine 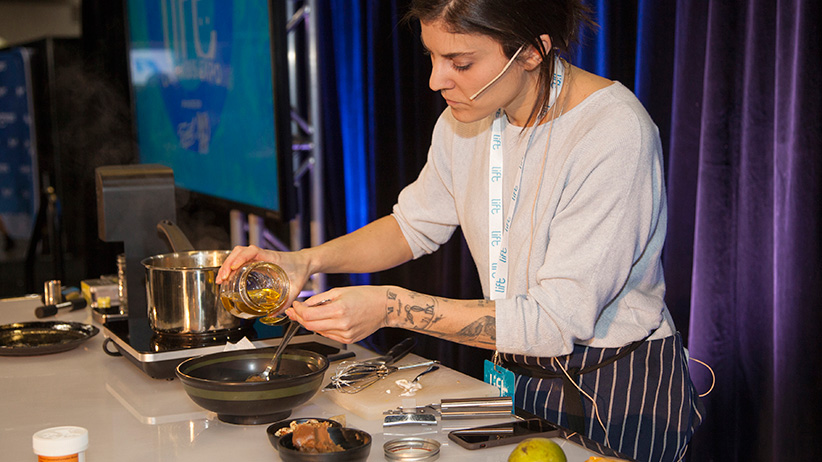 Diandra Phipps is on stage at the Vancouver Convention Centre demonstrating a vegan poached pear recipe that packs an extra zing. Along side the star anise, sweet Muscato wine and caramel date sauce is small jar of coconut oil infused with White Widow, a high-THC cannabis strain sold by Tilray, one of Canada’s licensed medical marijuana producers.

Phipps, a young raven-haired chef from Halifax, apologizes for not being able to share the finished product. Unlike most trade shows, where exhibitors hawk their wares, cannabis products at the second annual Lift Cannabis Expo, are still technically illegal so are not supposed to be bought, sold or given away. There were a few free samples of lotions and tinctures on offer, but no edibles or plain old bud for sale—at least not inside the convention centre doors. But this is Vancouver. Outside, a tent housed a “vaping lounge.” On the sidewalk just beyond, attendees partook in old-fashioned joints.

The pear recipe was pretty standard, except for the cannabis part, which to the uninitiated sounded like a chemistry class, with terms like terpenes (oils that give marijuana its smell) and infusion machines. Take, for example, the different methods for decarboxylating (baking your weed in the oven to activate THC, necessary to get you high). Cook it too much and everyone you feed will be flat out on the couch, fried before the evening is done.

Phipps walks the audience through a series of mathematical calculations every budding cannabis chef must make to avoid overdosing the company. When it comes time to add the infused oil, always make sure to stir well so no one gets the entire dose, she says. “And make sure you label all treats.”

RELATED: Marijuana addiction is real, and teenage users are most at risk

All this was complicated enough to make some in the crowd long for the good old days when you could smoke a joint and get into a bag of chips for nourishment. But Andrea, who didn’t want to give her last name for fear she would be hassled crossing the U.S. border, found the class valuable and instructive. “I don’t enjoy smoking marijuana, but I enjoy the effects of eating it.”

Andrea, whose hair is long and greying, was a teenager in the late 1960s and uses cannabis both medicinally (for undisclosed conditions) and recreationally. “As it becomes more available, I think my contemporaries will go back to it,” she predicts.

That is precisely what drew upwards of 12,000 people to the expo over two days in mid-January. Many were business people in sport jackets and brogues. Canada’s medical marijuana business is already booming, and with legalization just around the corner, the recreational business is about to explode. In a sign of how corporate things have become, this year’s Vancouver Lift expo was preceded by a sold-out, day-long business conference where a networking breakfast was sponsored by MNP, one of Canada’s largest accounting firms.

Everyone hopes to ride the wave, including Matei Olaru, the affable 28-year-old CEO of this weekend’s event. Olaru became interested in med pot before any producers were licensed in Canada, when most users grew their own. When government licensed growers, and corporate opportunities took shape, he decided to jump in. He studied law, articled at Stikeman Elliott in Toronto, then quit to join Lift the day after his bar admission.

RELATED: In defence of the LCBO: Ontario’s liquor history holds lessons for pot

As well as hosting trade shows, Lift operates the Yelp of medicinal marijuana, an online platform where users rate different strains sold by Canada’s licensed producers. Olaru collates user ratings to supply the industry with data about demographics and preferences. With the move from medical to recreational use, he figures the number of legal users will jump from 200,000 to five million, and newcomers will be hungry for product information.

“What we bank on is it will be a restrictive environment just like it is today, where producers can’t advertise their products, can’t make claims about what the product does.” So, his website will be an obvious go-to for the next generation of users, who will be older suburbanites and “regular adults”, Olaru says.

The packaging and marketing of medicinal cannabis producers at the expo already reflect the impending shift in clientele.  The once-ubiquitous head shop imagery found at 4/20 celebrations is largely absent. These products are pitched to a mainstream clientele. Take Omni, which produces a series of oils, creams and salves for pain. Their shiny black containers with gold lettering would be at home on a Holt Renfrew cosmetic shelf. “We don’t want people to have to hide it in a medicine cabinet” says Nicola Hillbrandt, who is working the booth.

One group, however, is not caught up in legalization euphoria; the self-described protesters staffing chilly, illegal outdoor booths with bags of weed and edibles for sale. They resent the corporate incursion into their recreational space and fear legalization will cut them out of the business. “They won’t give me a licence because I have a record for dealing cannabis,” laments Dillon McArdle. Complaints aside, McArdle admits he shifted from his regular location at the Vancouver Art Gallery, about a half-mile away, to the convention centre, where all the action is. For one day, at least, he is happy to capitalize on the corporate success to come. 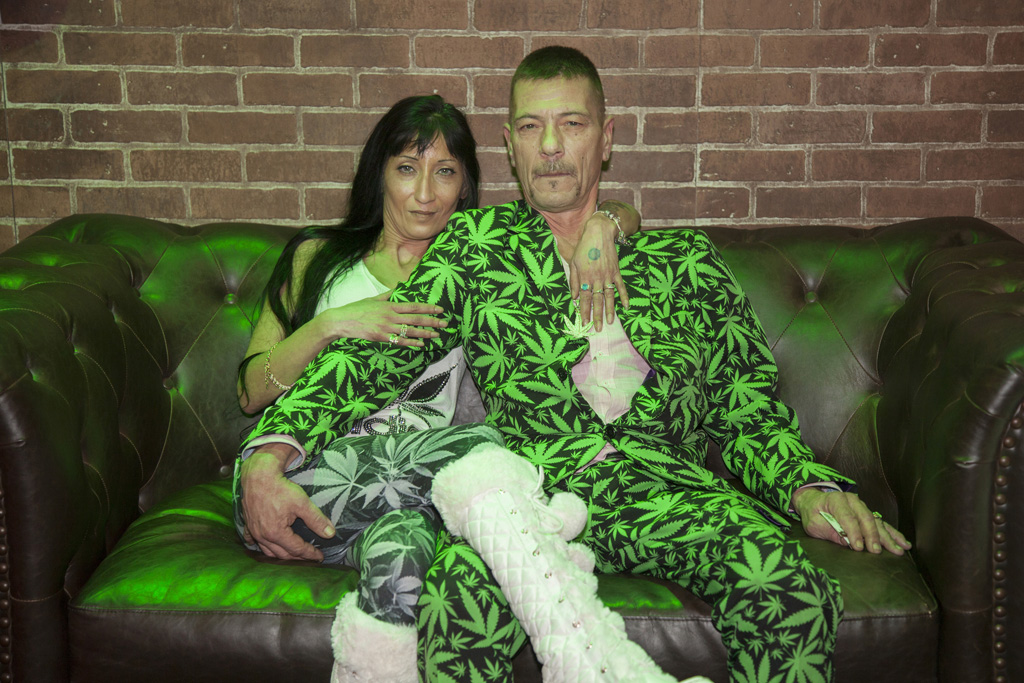 Doug and Michelle work in the cannabis industry. They expressed they have had some run ins with the law, as they are not in the monopoly of LPs.