How to find meaning in the futility of existence 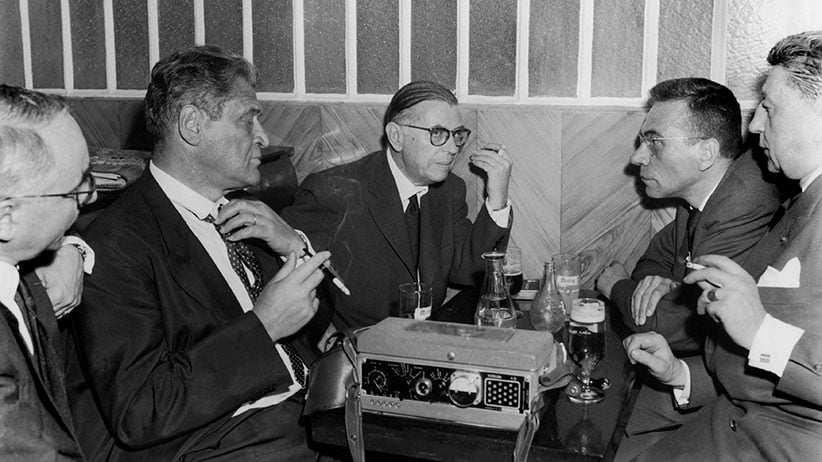 Writers Joseph KESSEL Jean-Paul SARTRE and, to the latter’s right, the reporter Roger PRIOURET conversing at the close of reporter Georges ARNAUD’s trial. ARNAUD was sentenced to a two year suspended prison sentence. The scene takes place in a Paris cafe near the military tribunal of Paris, on June 18, 1960. (Keystone-France/Gamma-Keystone/Getty Images)

With The Futilitarians: Our Year of Thinking, Drinking, Grieving, and Reading, author Anne Gisleson accomplishes the seemingly impossible: she makes some of the thorniest, densest and most depressing literature of the 20th century seem, somehow, accessible. Taking the form of the diaristic memoir, the book chronicles Gisleson’s experiment with her Existential Crisis Reading Group, a monthly meet-up of middle-aged New Orleans residents working through personal anxieties through the lens of philosophy and literature. From Epicurus and Tolstoy to Holocaust survivor Tadeusz Borowski’s stories to the American upper-crust existentialist tales of John Cheever and the pained balladry of Jacques Brel, the group tempers the heaviness of its monthly homework assignments with the lively free flow of ideas (and wine). Gisleson brings her own traumas—the recent passing of her father, the memory of her sisters who took their own lives—to the readings and the meetings, finding a way to hew meaning from the nothings and futility of existence.

Much more than some hokey healing memoir, The Futilitarians takes up the core project of existential thought, with Gisleson describing the essential struggles of existence, along with her own deeply personal sorrows, in frank, insightful, often beautiful prose. This conversation has been edited for length and clarity.

Q: There’s a phrase you use near the beginning of the book about being in the “fulcrum of midlife.” It’s a period when most people would buy a boat or get a bad tattoo, but you and your group of friends delved into existentialism. Why?

A: It came from a friend of mine, Chris, who is extremely intellectually engaged—kind of manic in that way. He really wanted to discuss these ideas. I remember when he came over to try to talk to me about them, I was making dinner for my kids. It was so hectic. It was like, “Listen, I really don’t have the time to sit down with you one-on-one and talk about this.” So we started thinking about it, and all our different friends, and kept having conversations with people struggling with big ideas: modern anxiety and those kinds of things. So we formed this group. It wasn’t a book club. More of just a place to get together and have a lot of wine and cheese. Everybody was so immediately into it.

Q: Do you think having a group like this helps keep you honest, and helps keep on you task? I know recently I bought Les Misérables and was like, “Yes. I’m going to read Les Misérables this summer.” And it’s just sitting there, staring at me, this brick on my bedside table.

A: I was going to read Middlemarch this summer and that never, ever happened. But having a monthly commitment makes you accountable—not just to yourself but to another group of people, and to the project. Everybody brings something to the table. There are a lot of smart people in the room, so you want to bring your best game to it, and have questions. It not only keeps you honest, it keeps a sacrosanct intellectual space in your life. That’s the first thing that goes in contemporary life.

Q: When people think of existentialism, they tend to not think of a stuffy lecturer droning on about German idealism. They think of people sitting around in cafés and salons, talking about ideas.

A: They were hard-working people, though! They were engaged in political and social protest, and the French resistance in the Second World War. It’s more an American idea of existentialists in cafés. But some of them were downright workaholics. Jean-Paul Sartre, Simone de Beauvoir, Albert Camus: they liked to party and have fun, but they were really engaged in the political and social world, too.

Q: How familiar were you with existentialism and this whole body of literature going in?

A: My understanding of it was always that they were focused on meaning, and how to create our own meaning. We were born into meaninglessness, and without essence, and therefore we have to create our own meaning by our actions, by the things we do in the world, by the questions we ask. That gives you a certain amount of freedom, because you’re detached from previously set religions and ideologies and everything. But there’s also a great amount of anxiety that comes with that freedom. That’s what causes the anxiety. I always liked this idea of life being a very intentional act, where everything we do is a way to create meaning. It’s a very grounded, practical approach. That’s another thing the existentialists are known for: this practical approach to philosophy. It’s something you lived.

Q: I’m glad you mentioned that idea of freedom. Kierkegaard talked about creating yourself, and de Beauvoir talked about how the ambiguity of existence is a source of freedom. But existentialism sometimes has a heaviness or moroseness to it, with all the talk about nothingness and meaninglessness. Given the personal tragedies you’ve suffered, was it ever tempting to just succumb to the meaninglessness and nothingness, as opposed to fighting back against it?

A: That’s a complicated question. There’s one part in the book where suicide is discussed as a valid out, because you’re taking control of nothingness. Suicide has come into my life with an unfortunate frequency—even this year, two people I knew committed suicide within six months. I have a depressive personality. And I think for anyone who thinks deeply about things, suicide is always going to present itself. But my sisters doing it took that choice off the table for me; seeing the aftermath of it, and the destructiveness that came in its wake. I also knew that it was not an act of control on their part. It was a loss of control. I think [Brazilian author] Clarice Lispector said that it’s our duty to see life through to the end, to just commit to it, no matter what. I don’t know. It’s such a complicated thing.

Q: Do you think the title of the book, The Futilitarians, lays out the project of the book: finding a way to live with this essential futility of existence?

A: That’s exactly right. We’re born with this knowledge of our own death, and we’re expected to keep living and carry on with that knowledge. I think when you acknowledge that futility, it helps you move forward. But first you have to acknowledge that possibility.

Q: Suicide is such a big theme in existentialism. As someone who has been so personally affected by it, did you find something troubling, or even crass, about how issues like this are used almost as abstract thought experiments?

A: Yeah, yeah. There’s a lot of these heady philosophical responses to it. And the way I experienced it with my sisters was that it was not a philosophical issue at all. It’s not. It’s emotional, it’s mental, it’s psychological. The one thing it doesn’t seem to be is an abstract philosophical concept for people to work through.

Q: There’s a chapter that takes place around Easter, in which you and the group take the Catholic ritual of the Stations of the Cross, and transpose philosophical ideas onto it. Do you think in a world that’s increasingly secular—or, some might say, “post-secular”—that philosophy, or even critical reading and thinking, can replace the meanings and the grand structures that religion used to offer us?

A: I think it can. And I think the key word there is “structure.” Most religions wouldn’t exist without some kind of structure, whether it’s prayer and verbal structure, or the mass itself. I mean Catholicism, my God! The whole liturgical year. There’s so much structure in Catholicism. I was brought up deeply, deeply ingrained in all that. I still experience the world in that way, even though I’m a lapsed Catholic.

Q: The book takes a lot of these ideas, and tougher texts, and makes them accessible. The counterpoint to this might be that philosophy is meant to be difficult; it’s meant to be this abstract consideration of existence and the pattern of thought itself. And as soon as you start taking out ideas piecemeal to make them applicable to life, you’re doing something that’s antithetical to the spirit of philosophy. Levinas would call this “instrumental reason,” or Sartre might call it “bad faith.” Did the group ever have discussions about how as soon as you start putting philosophy to work for you, you’re not really doing philosophy anymore?

A: We do have a philosophy professor in our midst. He would probably have a really great answer for that. But for the group, the terms set out from the very beginning were about taking texts, even if it was just discussing them, and using them as part of a practical experiment, as opposed to a loftier sort of thing. One of my concerns writing this book is that there’s a certain dilettantism in it. I’m just a reader. I’m not an academic. I’m not an expert in Polish postwar literature. I’m not an expert on Bible studies or Russian literature.

Q: Has your existential crisis been resolved? Or is the lesson that it’s never resolved, and the work of philosophy is the constant interrogation of it?

FILED UNDER: Editor's Picks existentialism The Futilitarians: Our Year of Thinking