“I want to unionize as many Starbucks as I can get”

Union organizer Pablo Guerra helped employees band together at Canada's only unionized Starbucks. Now, he's at the head of unionizing efforts underway across the country 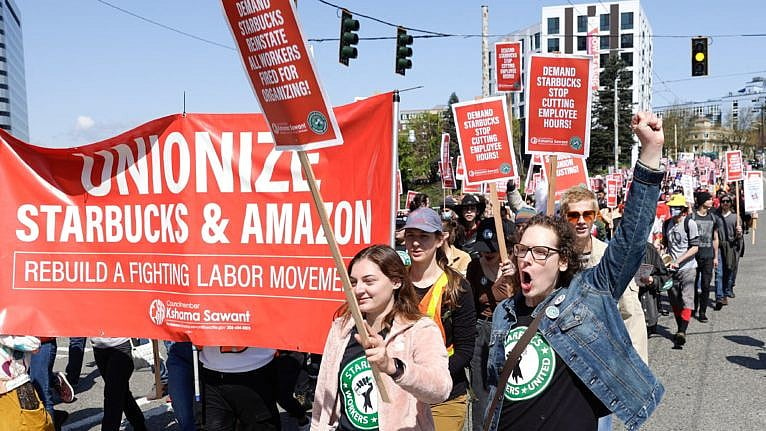 Pablo Guerra, 57, has been union organizer for about 15 years in a variety of industries. Lately, he’s turned his attention to the world of fast-food where he’s been involved in a wave of unionization campaigns for Starbucks employees currently sweeping across North America.

In the United States, more than 50 stores have unionized since last August, and more than 230 have filed petitions for a union vote. More recently, a group of Starbucks in Lethbridge, Alberta has started Canada’s own wave.

Last month, five stores in Lethbridge announced they were seeking a union certification vote with the United Steelworkers Union (USW). They are aiming to join Canada’s sole unionized Starbucks, located in Victoria, as the only successful attempts in Canada.

Guerra, a USW organizer, is working with these stores to guide them through the process. He was instrumental in unionizing the Victoria location, and advised Calgary’s Chinook Centre mall location, which ultimately failed to unionize. Guerra says he’s amazed by the new generation of Canadian workers looking to unionize and sees it as a legacy for himself and his union.

In an interview with Maclean’s, Guerra discussed the new wave of Starbucks unions, what Canadians don’t realize about low-wage work, and why Lethbridge has taken centre stage in the fight for Starbucks workers unions.

Has the pandemic—and changing views on the workplace—had an effect on the union push at places like Starbucks?

I’ve been doing this for twenty-something years and I’ve never seen such interest to become unionized, especially in Alberta.

Usually in Alberta our union organizes about two to three hundred workers a year. Within the past 365 days, we had a call centre in Calgary where over 200 workers became unionized. In Grande Cache, 130 people from the Foothills Forest Products sawmill unionized. At Medicine Hat’s Wellington Retirement Residence, 80 people became unionized, and now there’s Starbucks—you can see the trend.

Why do you think a union push is happening in a smaller city like Lethbridge? And what are some of the issues employees are facing there?

After the pandemic, I think rural Canada realized, especially in Alberta, that workers don’t have enough rights. Government labour standards are minimum protections—just like minimum wage and minimum vacation.

Rural Starbucks workers started talking with baristas in other places and realized they had the same problems and needs. They realized their employers make millions of dollars, and they don’t pay enough. Companies like Starbucks talk about not needing third parties and how the door is always open to talk. Since when? There wasn’t enough personal protective equipment during the pandemic, and when workers called in and said they were sick they were faced with losing future shifts.

Now, especially in Lethbridge, you’ll find workers who are very committed and understand that the union isn’t perfect, but it’s the only thing that’s going to give them these protections.

What did you learn from your experience of unionizing fast-food workers at the Victoria Starbucks location?

About two years ago, I received a call from a Victoria Starbucks about unionizing. The Auto Workers union had tried in the past but wasn’t successful. (In 2007, Vancouver-area Starbucks workers left that union, having gained little bargaining clout with headquarters.) I went to the USW director, and we were a bit hesitant to organize because of that experience. But we were so compelled by the history of mistreatment the workers received that I thought the workers needed representation.

That success sparked the Starbucks union movement. It showed we can do it. It became like a wildfire in the United States. In Canada, we’ve been a little bit more conservative, watching to see how Starbucks, an anti-union corporation, would respond. Now we’re doing a big push, starting with five cafés in Lethbridge.

You successfully unionized the Victoria Starbucks located at Douglas and Alpha streets. What’s different for workers there now?

What the union did for workers there was give a structure. They have the power to bargain. They have the right to additional health and safety measures. They used to have a lot of customers harass the employees, but now they have regulations to protect the workers from that. Shifts were usually distributed to workers by the manager, but there’s seniority now.

Let’s say in one quarter, a worker loses hours. In the next, they could get kicked off the medical benefits plan. Who controls giving those hours? The manager. Now, all employees have benefits after they pass the probationary period, so you don’t have to work a minimum number of hours to keep them. At the bargaining table, Starbucks said it didn’t have any more money, but a couple of months after signing the contract it gave raises to everybody except the unionized store. It was beyond the money they were making. Why does Starbucks now have the money to give a raise? It’s because they want to bust the union.

In March, a unionization attempt at Calgary’s Chinook Centre mall Starbucks failed. Why do you think the Lethbridge attempts will succeed?

In Calgary, our main contact left, and the person who took over their role was offered a managerial position by Starbucks.

In Lethbridge, the workers did all the homework and became very involved in the campaign. They didn’t just sign up, they took ownership of the campaign. More and more, the company’s power over the workers is fading, no matter what they try to do.

Do you think there will be a bigger unionization push by customer service workers?

I think it’s going to be a new sector for the union. I call them forgotten workers. Big unions in our society almost never see the exploitation for minimum wage happening in these industries.

I think that every worker has the right to be represented, and I believe there are going to be changes in the future. For instance, what about workers in malls for big corporations like Telus, where parts of the company are unionized and others not? There are immigrants and foreign workers in mall food courts making minimum wage. Those companies make millions and they can do so because they have those people working there. Many Canadians don’t even realize what’s happening.

Canadian society doesn’t realize you have two tiers of workers. Essentially, one has rights and another doesn’t. For example, a temporary foreign worker from Mexico might make $16 an hour, making in one month in Canada what he makes in two months back home. If he isn’t provided with paid sick days or overtime pay for working long hours, or makes less than what he’d earn if he were a Canadian citizen, it’s okay for him because he’s still making better money. But that shouldn’t be okay for anybody.

Meanwhile, other workers in Canada fight for all the rights we have, but the government doesn’t always regulate it equally. And employers take advantage where they can.

The wave of Starbucks unions in the United States is unprecedented. What do you hope to see a year from now in Canada?

I want as many Starbucks as I can get. I want Canada to become a model for how big corporations are vulnerable to getting organized—not just to help create a massive movement, but because when you have a strong union, companies often decide to raise wages to dissuade employees from unionizing. We’re lifting up the standard of living for workers because of unions. If we get more companies in the fast-food industry like Starbucks on board, there will be more workers unionized and workers getting more money all across the board. I think it’s a win-win.