I'm an Ontario education worker on an illegal strike. I'm not going back until we get a fair deal.

“Nobody wants our jobs anymore. I have a co-worker who wears Kevlar to work, because they’re afraid of being assaulted. Others go to food banks because they can’t afford to eat.” 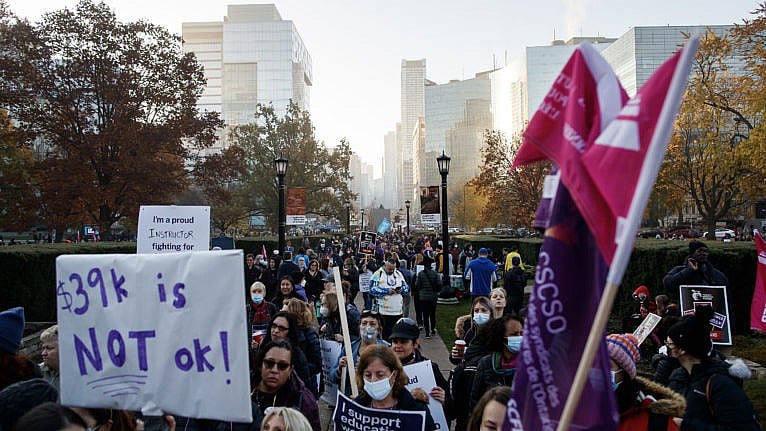 CUPE Ontario members and supporters wave signs and flags as they demonstrate outside of the Queen's Park Legislative Building in Toronto, Friday, Nov. 4, 2022. THE CANADIAN PRESS/Cole Burston

For the past 17 years, I’ve been an educational assistant with the Limestone District School Board in Kingston, Ontario. My job involves providing support for special-needs students, helping with physiotherapy, feeding, toileting, speech, movement, everything. I love my job. I love the students. But I’m now one of thousands of education workers on strike in Ontario, and I won’t be going to work today—or tomorrow, or again until the Ford government chooses to negotiate a fair deal with us.

To be clear, it’s illegal for me to protest like this. The government just passed Bill 28, the Keeping Students in Class Act, which fixes my wages through 2025 and prohibits job action. I could be fined up to $4,000 for missing work today—but I don’t care. Workers are leaving the education system in droves because they can’t afford to support their families, and I’m fed up, along with my colleagues.

In August, our union requested a pay increase of $3.25 an hour—with the average CUPE education worker making $39,000 a year, that’s an 11.7 per cent pay raise. That might seem like a big jump, but it follows more than a decade of wages steadily dropping in real terms: we’ve seen 19 per cent inflation in that time, and our salaries have only increased 8.8 per cent, making for a de facto pay cut.

But instead of negotiating with us after that request, the provincial government fast-tracked Bill 28, unilaterally imposing a new contract. It offers education workers making less than $43,000 a year a 2.5 per cent wage increase annually through 2025. Those earning more get a 1.5 per cent increase, and we can’t negotiate salaries for the foreseeable future.

For me, that increase is almost meaningless. I only make $34,500 a year, barely more than I made when I was hired full time in 2008. Based on my salary, the proposed wage increase means I’ll get an extra $72 a month. That’s before taxes, benefits and my pension get taken out—it won’t even buy me a full tank of gas.

My husband, Jarrod, is a correctional officer here in Kingston, and we have three kids 12 and under. Our paycheques aren’t going toward lavish vacations; they’re spent on food, medical expenses and keeping a roof over our head. The little bit we have left over from my husband’s paycheque goes toward an education fund for the kids—but any little unexpected expense means nothing is left over.

When the power steering lines broke in my minivan, we had to borrow money to pay for the $1,500 repair. Last year, my daughter, Sophia, was diagnosed with dyslexia, and it cost $4,000 just for the assessments. We paid that out of pocket. Her speech-therapy classes are $80 each. All told, we’ve probably spent $25,000 on outside support since her diagnosis. We renewed our mortgage this year, and our monthly payments jumped by $400 due to interest rate increases, making everything that much harder.

Jarrod’s overtime pay helps keep us above water—he figures out how many additional hours he can work each week to bring in more money, but that means he misses a lot of family life. Most days, he leaves for work at 5:30 in the morning and gets home at 11 at night. He often sees the kids for a little bit in the morning, then not again until the next day. These cutbacks don’t just hurt workers, they hurt families, and kids.

We’ve also had to deny our kids extracurriculars—those little things that many families take for granted. My oldest son, Jeremy, recently developed a love for flag football. I might be biased, but he’s really good at it. My youngest son, Andrew, wanted to join a flag football league. But we can’t afford it. The league costs $275, and then we’d need to buy cleats, a mouthguard, gloves, etc. It’s not like the raises we’re asking for will go into some offshore bank account; they’d go toward speech therapy and flag football. They’d enrich our children’s lives and be funnelled right back into the community. My husband and I have full-time government jobs—we should be able to live decently and provide these things.

It’s not just workers and their families who are suffering, either. When I started, there was a 1:1 ratio between educational assistants and special-needs students. But every year, resources have dwindled and caseloads have increased. Last year I had eight students, and it just wasn’t possible to see all of them. Some days, I went home thinking, Oh, I didn’t see so-and-so today, I hope they’re okay. I skipped breaks and found extra time to catch up, but there’s only so much I can do.

Students aren’t getting enough support because nobody wants our jobs anymore. The work is harder, worse-paid and sometimes dangerous. I have a co-worker who wears Kevlar every day in an elementary school because they’re afraid of being assaulted. Others go to the food bank because they can’t afford to eat.

Now that Bill 28 has passed, I see more struggle in the future. Families will have to make tougher choices when it comes to providing for their families. Students will suffer as more educators leave the system, and those who remain are overworked. The Ford government makes it sound like these strikes will negatively impact parents and students. But I’m a parent. I want my children to be in school. In the long term, the best way to improve things for everyone is to show the value we bring as educators. And right now that means skipping class.

— As told to Matthew Silver