In Hawaii, a false-alarm missile alert is a shocking glimpse of reality

'This is not a drill': What happened when the vacation paradise of Maui woke up to the threat of an incoming ballistic missile 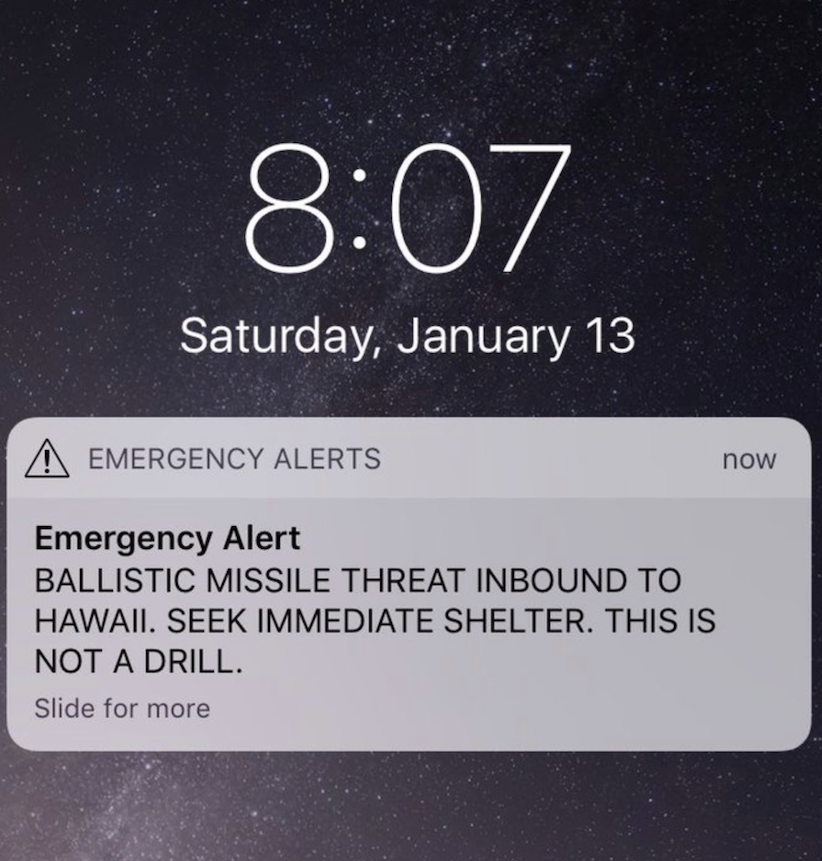 A screengrab of the push notification sent to people in Hawaii alerting a “ballistic missile threat.” The alert was later confirmed as a false alarm. (Twitter)

MAUI, HI.—As a vacation destination, the island of Maui—perhaps more than almost any other place that North Americans often flock to—is a hotbed of constant, intentional distraction.

It’s a place where you have to suspend disbelief that it even exists—both in its remarkable views and placid lifestyle, but also in practical terms. Its resorts are protective bubbles for its visitors, and lifelines for a state whose primary industries are connected to the unsteady whims of tourism. The state of Hawaii has its glistening hotels and peaceable beaches, but it also has the highest per capita homeless population in the United States and a growing gulf of income inequality, according to a 2012 report from the Center on Budget and Policy Priorities. Tourists regularly bustle blithely through locals’ religious sites and private homesteads.

It’s a place where, to summit the dormant volcano at the breathtaking Haleakala National Park or to wend through the nauseating Road to Hana, you have to turn off the part of your brain that would otherwise sagely shriek that you don’t know what’s around all those blind turns, that you don’t know whether an oncoming car might be drifting outside its lane, potentially sending you hurtling over the edge.

It’s a place where the common refrain from vendors trying to sell demurring tourists on their costly zipline tours or overpriced kayak rentals or snorkel cruises with their tacked-on open bars and cheap buffets is a paean to sunk-cost fallacy: you’re already here.

For a little more than 15 minutes—not long after another stunning sunrise where the sun doesn’t so much ascend as much as the clouds lift on another inexplicably perfect Saturday morning—that koan had a different, incapacitating meaning. Sitting primly in the vast north Pacific Ocean, nearly 4,000 kilometres away from the continental U.S., a state still psychically affected by an attack more than 76 years ago that launched the U.S. into the Second World War was seized by an all-caps push notification: “Ballistic missile threat inbound to Hawaii. Seek immediate shelter. This is not a drill.”

What shelter? Where could we go? There is no paralysis that’s more profound, it turns out, than the dawning horror that we’re already here.

It also turns out that, in a crisis, everyone becomes more of who they already are. My father, who—like so many fathers—likes to keep CNN on in the background of his life so he can occasionally spit back outrage at the frantic updates and panels of the day, turned on the network in our hotel room, only to be let down: there was no news. And my mother, weathered into eerie calm by years of her children constantly testing her on what we’d long felt to be the conservative end of parental oversight, wandered into my room with the casualness of someone noting that breakfast was ready. “We’re all awake now… Dad got a notification.” What notification? “Something about an incoming ballistic missile.”

Where wiser, better people would use the minutes before potential hellfire to hunker down with family, I instead started doing the work I knew best: finding credible sources. I jogged outside, cell phone in hand, and saw tanned bodies milling about in the hallway, nervously clutching their towels. In lieu of information, people were urged to return to their rooms, but few did. For what felt like an hour, constant refreshes of Twitter offered no information. A college basketball game on the TV I was watching was interrupted by an atonic beep, a bold red ticker, and then a grim voice: “A missile may impact land or sea in minutes.” Those words again: “This is not a drill.”

FROM THE ARCHIVES: Pearl Harbor: Vets from both sides share harrowing stories from that day

And so, without any firm information to suggest otherwise, I allowed myself the thought: this might actually be real. So I went back to my family’s room—and kept that to myself.

I wish I hadn’t. I wish I hadn’t instead just posted some joke on Instagram and then raced out to find out more information. If you are more of who you are when you realize death could be around the corner, then that’s not good. I regret not making my various peaces and being vulnerable with my many buried feelings; I regret not being with my family, urging them to hunker down.

Fortunately, only a minute or two later—to the credit of a resort that surely has little experience informing tourists about the veracity of missile hellfire—the Westin’s lobby alarm system blared out news: this was a false alarm. Shortly thereafter, Hawaii’s Emergency Management Agency tweeted the same. I ran back to share the good news.

So the crisis abated. If it feels somewhat American to be upset upon learning that you were inconvenienced, the relief of life surely eased that. The generic Polynesian music that had piped across the resort all week, which never turned off even amid the threat of devastation, continued to play. Visitors began to lay their beach towels along the much-desired chairs along the pool; it felt, at least, like more families packed themselves alongside the beach and pool in the hours afterward. The acts of distraction began again.

For as much as popular culture and the media at large has mused over the chances of nuclear warfare, it never quite felt real. Pearl Harbour feels like a lifetime ago. A place like Hawaii, the most likely target of an attack from North Korea on U.S. soil, has been preparing with drills and siren installations over the last year. But those fraught, confused minutes, the frozen feeling in everyone’s knees, and the scared looks wracking vacationers’ faces were only possible because it became suddenly clear that we all had previously held that this moment was inherently impossible.

Leave it to a place as unreal as the delicate islands of Hawaii to make something deeply real.