Q&A: Father Nadim Nassar, Anglican priest and director of the Awareness Foundation, a charity that encourages diversity and acceptance, on the threats Christianity faces 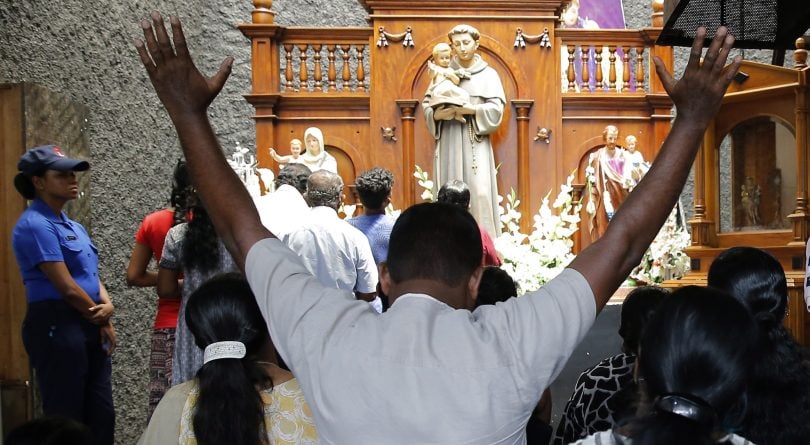 Catholic devotees pray at the St. Anthony's church after it was partially opened for the first time since Easter Sunday attacks, in Colombo, Sri Lanka, Tuesday, May 7, 2019. (AP Photo/Eranga Jayawardena)

Until the recent massacre of Christians in Sri Lanka, it’s likely that most people in North America and Europe considered the idea of the persecution of Christians as little more than conservative hyperbole, a cry of wolf to defend those with reactionary views regarding equal marriage or abortion. In fact those false claims from western Christians and their friends have done enormous harm, because the truth is that Christians are certainly persecuted in large parts of Asia, Africa and the Middle East, to a shocking and hideous degree. I’ve been writing and broadcasting about this issue for more than two decades and the problem has, if anything, become even worse.

A recent report commissioned by the U.K. government concluded: “The inconvenient truth is that the overwhelming majority (80%) of persecuted religious believers are Christians,” and that “forms of persecution ranging from routine discrimination in education, employment and social life up to genocidal attacks against Christian communities have led to a significant exodus of Christian believers.” Commenting on the report, British Foreign Secretary Jeremy Hunt stated, “What we have forgotten in this atmosphere of political correctness is actually the Christians that are being persecuted are some of the poorest people on the planet. In the Middle East, the population of Christians used to be about 20 per cent; now it’s five per cent.”

Father Nadim Nassar is a Syrian born to a Christian family in Latakia. He studied in Lebanon, and now lives in London where he is director of the Awareness Foundation, an ecumenical charity working in Europe, North America, the Middle East, and Hong Kong to encourage diversity, acceptance, and peace. He is also an Anglican priest, the Church of England’s only Syrian clergyman. His latest book is The Culture of God (Hodder and Stoughton) and he is in Toronto to receive an honorary doctorate from the prestigious Trinity School of Divinity at the University of Toronto.

Were you surprised by what happened in Sri Lanka?

No, not at all, and the ignorance in the West of what is going on has annoyed me for decades. It seems that the more media we have the more ignorant we have become. America declares that ISIS is defeated in Syria and Iraq. Total nonsense. ISIS is well, alive and kicking, in the form of an ideology. And if you think ideology can be defeated by a bullet you are mistaken. The ISIS ideology has been exported and nowhere is safe. I don’t want to sound polemical but this is the truth. It’s not just Islam of course. Religious extremism is a virus that may have begun in the near east with Islam but has now spread internationally to mosque, temple, church, everywhere. The Christian right in the United States, Hindu nationalism in India, and so on.

Yet in your country of Syria, and in Iraq, Palestine, and Jordan, Christians historically enjoyed a certain equality and even respect.

Yes, but there is a reason for that. No Christian would dream, for example, to be the President of Iraq or Syria. We were harmless, we weren’t seen as a threat. There were some exceptions. For example, we had a Christian Prime Minister once in Syria, one of the founders of the UN, but this was never taught to us at school. It was written out of our history. Christians also played a major role in pan-Arabism, or Arab nationalism, as long ago as the early 20th-century, but part of this was because the Arab identity was always seen as less dangerous than the Muslim identity – Arabism might include us, political Islam never would. We have always been between a rock and a hard place, but it was never as difficult and dangerous as it is now.

How did the Iraq war and western intervention in Syria influence the situation for Christians?

It made it much worse. No doubt. Arab Muslims see us as an extension of the west in the region, but in the west we’re invisible. Fanaticism was empowered by the chaos, and Christians suffered accordingly. Westerners might know of the road to Damascus and St. Paul, but they think of Damascus as some imaginary place, like Camelot, rather a city in my country. There are people who think that the west intervened to help Christians. Rubbish! They intervened to extend their own interests.

When I first came to Europe thirty years ago people would ask me when I became a Christian. Our faith pre-dates Islam, pre-dates Christianity in Europe and North America. Look, the entire situation is a stain on the world and it’s shameful how we have done so little to prevent such suffering and tragedy. A million dead in my country and so many more in Iraq. Twelve million people moving from place to place, frightened and in such terrible need. Within all of this is the plight of Christians, always under threat.

Do you think a fear of being labeled as Islamophobic has prevented people from speaking up about the Islamist persecution of Christians?

Yes, for sure. We have created no-go areas when it comes to comment. I don’t like to use the word “Islamophobia.” I am from the near east, I know Islam, most of my friends are Muslim, and the idea that I have an issue with them is ridiculous. I shouldn’t even have to say this. Yes there is suspicion and even hatred of Muslims in the West, yes there is. But we need to be honest, we can’t be frightened of discussing certain issues. Muslim leaders point to ISIS and the jihadists and say, “these people aren’t Muslims.” No, that won’t do. Because those they condemn then turn around and say, “No, we’re the real Muslims, you’re not.” Muslim leadership has to deal with the fanatics, the killers, and the first step is to admit the truth. They are Muslims, and now deal with this problem.

But I also reject the term “persecuted Christians.” Yes, we are persecuted. But don’t think us as people are to be pitied, to be put aside as a group to feel sorry for and then forget. We have played an enormous role in Arab society, we still do. Work with us, as partners and not some victim group. We’re persecuted, but don’t simply label us and then conveniently reject us as victims.

Do you have hope or does the situation seem beyond repair?

I’m a Christian, I have to have hope, and I do. But if we take North Africa as a precedent it’s very discouraging. Tunisia, Algeria, Morocco – no Christians. That’s because the colonizers, the French, were brutal and once they withdrew so did Christianity. The French killed Christianity in North Africa. The issue now is that the bond of trust has been broken between Muslims and Christians in the region. When I return to Syria I wear my clerical collar but I’m careful, members of my family who live there don’t wear crucifixes outside of their shirts. And this is now, with the war allegedly over and in areas that are supposed to be safe. Yes, the near east could become like North Africa, of course it could. All I can do is to try to make people aware, to never let go, never stop, and, as you asked me, to have hope.