He’s a natural, but the Calgary Flames rookie has also been working his whole life to get to this moment 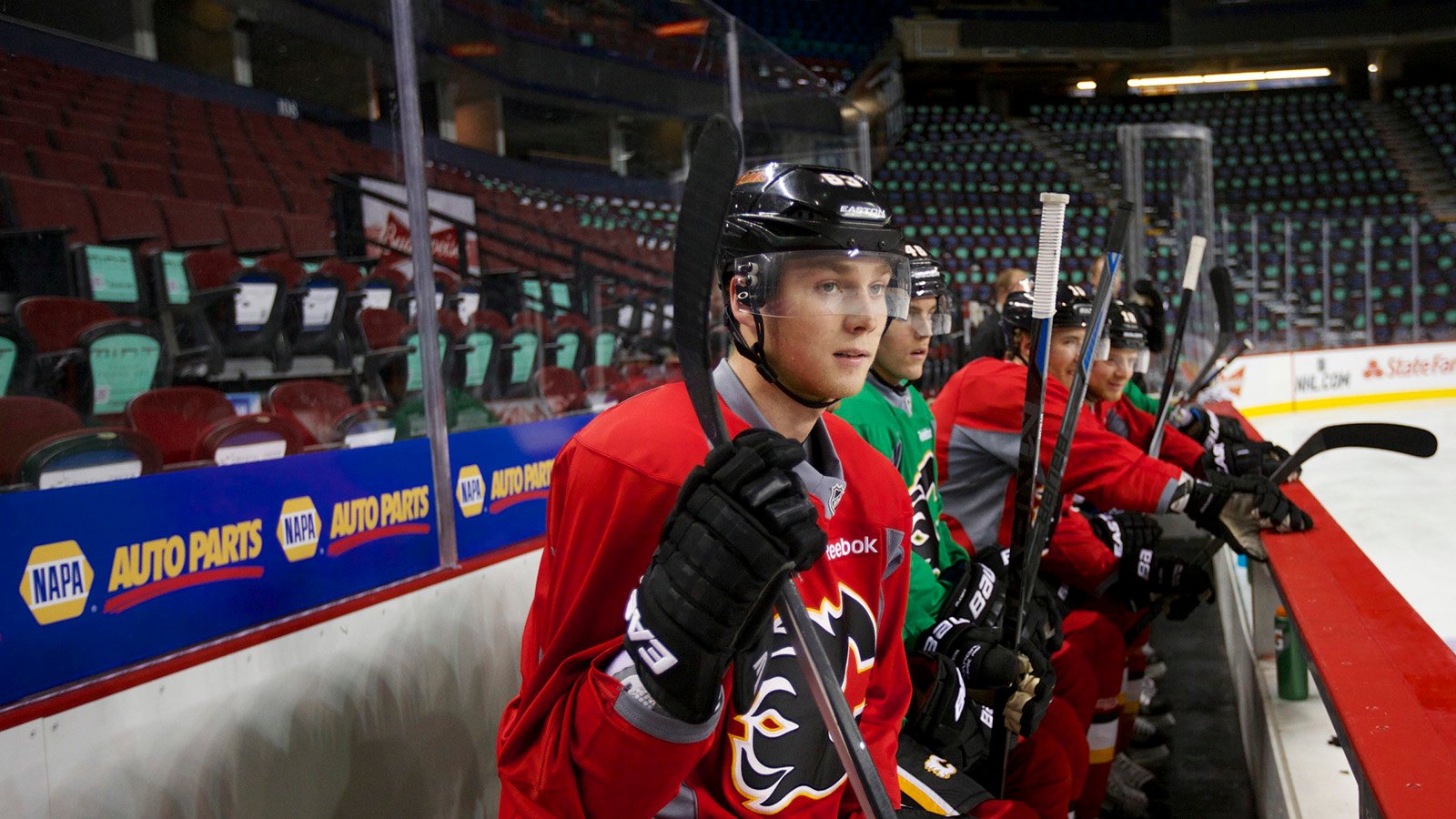 If Sam Bennett fulfills half the expectation that comes with his billing—top-rated skater going into the NHL draft; highest pick in Calgary Flames history—then his great Uncle Wally is surely in line for some credit. It was he, after all, who came downstairs one day 15 years ago to find three-year-old Sam tearing around the basement on a disused set of rollerblades, boots three sizes too large. The boy was skating like he’d been born in them, weaving at full speed around furniture in a preview of how he would one day treat opposition defencemen, and Wally called upstairs to Bennett’s dad: “Dave, you’d better come down and take a look.” The two men stared for a while, awestruck, before Wally murmured, “I think you might have something here.”

That prophecy would resonate last June, as Dave and his wife, Diane, sat in a hotel lobby in Philadelphia, one day from the 2014 NHL entry draft. Like many parents of hockey prodigies, they are to this day bereft of any convincing explanation as to their son’s near-supernatural gift. Dave had never played hockey at a competitive level; Diane played a bit of soccer in her youth, but that was it. When they settled into a modest life in Holland Landing, Ont., a quaint town of 10,000 north of Toronto, neither harboured visions of raising a star athlete.

Now, somehow, their child stood on the brink of his confirmation in the Great Canadian Vocation—a lock to be chosen in the top five and a potential first-overall pick. “I’m trying to slow it all down, just so I can absorb it,” said Dave, a school board maintenance and construction worker. Added Diane, a nurse: “The dream of our kid going to the NHL was always in the future, but now the future’s here. It feels a little surreal.”

That word would pass their lips more than once as they took in the hurly-burly of draft week. In hotel bars and corridors, they’d see faces they recognized from Hockey Night in Canada—Trevor Linden, Kevin Lowe, Dave Poulin. Sam, meanwhile, had spent the past few weeks criss-crossing the country for interviews with no less exalted a cast: Craig MacTavish, general manager of the Edmonton Oilers; Brian Burke, the crusty new president of the Flames. In Philadelphia, he was summoned the night before the draft for a last-hour chat with Florida Panthers GM Dale Tallon, who held the all-important first-overall pick. Outside the meeting room, Bennett ran into one of his childhood idols, Bryan McCabe, a former defenceman with Bennett’s beloved Toronto Maple Leafs, who now heads the Panthers’ player development department.

The bluff and hype that precedes every draft amped up the sense of unreality. Having publicly mooted the idea of dealing his No.1 pick, Tallon turned 180 degrees a few days later, telling reporters he was sitting tight. On the big night, as spotlights swept across the crowd at the Wells Fargo Center, he made good on his word, opting for Aaron Ekblad, a big yet mobile defenceman from Windsor, Ont. Two more picks went by before Bennett heard his name, and when he did, he was seized by a sense of relief and accomplishment. “It really felt like the world had been lifted off my shoulders,” he later told Maclean’s. “I hadn’t really been able to take in everything—I was just so in awe of what was happening. Just standing on that stage, pulling the jersey over my head, looking out over the crowd, was an amazing moment.”

“Prom night for hockey players” is how Bennett’s agent describes the NHL draft. When the cameras stop flashing, the back-slaps subside and the crisp new suit goes back in the closet, the real work of making the league begins, says Darren Ferris.

The pressure on Bennett was immediate, and acute. As one of a handful of players in his year considered NHL-ready, he immediately raised hopes among Calgary fans that the Flames had landed themselves another Sean Monahan, a 2013 draftee, who, last season, made the team out of his first camp. Bennett’s past season with the OHL’s Kingston Frontenacs—91 points in 57 games—suggested there was not much more he could learn in junior and, from the moment he was chosen, he let it be known that he planned to be in the Flames lineup when the anthems are sung at Scotiabank Saddledome on Oct. 8.

Those who know him will tell you that was more than youthful bravado. On the ice, Bennett’s tenacity and ferocity set him apart from the merely talented, says Brian McDavid, Bennett’s coach for five years of minor hockey, whose son Connor played alongside Bennett and is now the game’s top-rated junior player. “That edge to his game has always been there,” says McDavid, “even before he was playing full-contact.” In person, Bennett projects a kind of preternatural coolness, absorbing the world through gimlet eyes, weighing questions, answering evenly. “I’m going to prove that I’m ready,” he declared before the Flames’ rookie camp. “I’m going to make it tough for them to send me home.”

It was a prediction rooted as much in knowledge of precedent as in determination. In past years, teams routinely sent raw rookies back to their junior teams for seasoning. But lately, GMs trying to send a jolt through their lineups have opened the door to their newest draftees. Seth Jones (Nashville), Morgan Rielly (Toronto) and Alex Galchenyuk (Montreal) count among the dynamic players who have made the leap, to the delight of fans seeking a glimpse of a brighter future. That they play under relatively cheap entry-level contracts doesn’t hurt: Every dollar a general manager saves under the NHL salary cap is one he might use to pay an older, proven star. It seems like a win-win.

The practice carries risk, though. The Edmonton Oilers, in particular, have been chided recently for rushing young players like Taylor Hall and Nail Yakupov into the long, punishing NHL season before they were ready, setting back the reconstruction of a bottom-dwelling team while burning off those precious entry-level contract seasons. As a result, prevailing opinion among general managers is swinging back—especially in Calgary. Like the Oilers, the Flames are in the throes of a rebuild. When asked recently by Sportsnet columnist Mark Spector whether Bennett might make the team, GM Brad Treliving was blunt: “I’d be shocked.”

To Bennett, of course, this is all motivation to make good on the sacrifice of others. On a hot afternoon in late August, he took time from training to talk about the money, effort and family sacrifice that propelled him to this point. It began, he says, with afternoons on the family’s backyard rink, or the East Holland River when it froze. “Skating with my dad is one of my favourite and earliest memories,” he says. “The game has always been part of my life.” A pleasing image, but Bennett knows better than anyone that NHL careers no longer spring from frozen rivers. Over the dozen years of his minor-hockey career, his parents shelled out more than $100,000 for league fees, club fees, training clinics, equipment, travel—and that’s not counting rent for a basement suite in west Toronto, where Dave and Sam lived temporarily so the boy could play for the elite Toronto Marlboro club of the Greater Toronto Hockey League.

The two would come home on weekends, and there were times when the whole family wondered whether it was all too much. “I’d never been away from home, and being a 14-year-old kid moving to Toronto was a little intimidating,” Sam concedes. “But it was a good experience, and I think it helped me mature.” Yet they never treated it as some sort of investment that would one day pay off in a big-league contract, stresses Diane Bennett. “Whatever your kids are pursuing, as parents, you feel obliged to do it, as long as you can afford it.”

Big caveat, that. To this day, the family rides in a 10-year-old vehicle. Beach vacations have been out of the question. At the time of the draft, they’d yet to repair the garage door Sam had peppered with puck dents from practising his shot. But, even before Sam stepped onto NHL ice, these burdens had lifted. In June, hockey equipment-maker Easton signed the youngster to an endorsement deal. Then, a month later, Bennett signed a three-year entry-level deal with the Flames worth $925,000 per season, with performance bonuses that could run as high as $2.3 million. Even if he doesn’t make the team out of camp this fall and is sent back to the Frontenacs, the contract is waiting for him when he tries out next season.

The question for Bennett, then, is how to stop that from happening. Thus began a gruelling summer of workouts under the supervision of Andy O’Brien, the training savant best known for turning Sidney Crosby into a prototype of the modern player. Bennett embraced O’Brien’s regimen of alternating gym workouts and outdoor training—the latter a wearying sequence of hillside manoeuvres meant to strengthen lateral muscles. In late August, he flew to Vail, Colo., for high-altitude on-ice workouts with the rest of O’Brien’s stable, including Crosby, Jonathan Toews and Patrick Kane.

It was a fortuitous experience. There, Bennett received reassurance from Crosby, who, in his time, made a seamless transition between junior and pro. The pace of scrimmages they’d played in Vail was quicker than that of an NHL training camp, the Penguins superstar told him, noting that Bennett had done just fine among seasoned pros. Bennett’s confidence carried over to a rookie tournament in Penticton, B.C. In his second game, he scored a goal, assisted another and served up a couple of thunderous checks against the Edmonton Oilers prospects.

The challenge remains steep. A groin strain kept Bennett out of action on the first day of Flames training camp, and Treliving had set the bar high. “He will have to come [to camp] and show beyond a shadow of doubt, not only that he is ready to be here, but this is what’s best for him,” the GM had said. Yet erasing doubt—defying expectation and asserting his place on a team—is a rookie’s part in an act as old as the NHL. And, as his Uncle Wally learned that day in Holland Landing, Sam Bennett is a kid with a surprise or two up his sleeve.

FILED UNDER: Inside the NHL NHL Sam Bennett