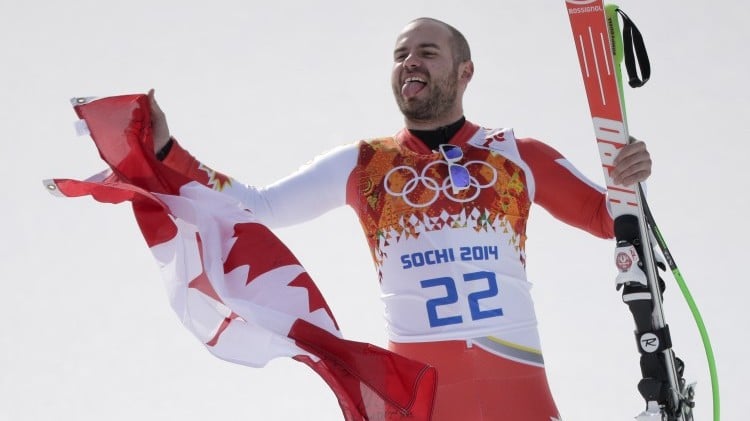 Deep down in Jan Hudec’s Twitter feed—under the sublime handle @pandaHAUSofROCK—there’s a very lousy photo. It shows the tip of a red Rossignol ski, the bottom edge of some protective padding at the finish line of the Sochi ski course, and an expanse of white snow. But if you look closely enough you can see the small hole. It’s where he buried the loonie yesterday.

The coin was a good luck token from Karen Lee-Gartner, who capture gold at the Albertville Olympics in 1992, and her husband Max, who until this past summer, was head of Alpine Canada. A bit of patriotic voodoo designed to end a historic drought. It had been 20 years since a Canadian skier last stood on the Olympic podium—Eddie Podivinsky’s bronze at Lillehammer. And it worked.

Starting 22nd in the men’s Super G, Hudec carved a smooth, fast path down the mountain at the Rosa Khutor Alpine Centre and posted a time of 1:18.67, tying American Bode Miller for the bronze medal. Kjetil Jansrud of Norway took the gold with a time of 1:18.14 and Andrew Weibrecht of the United States clocked 1:18.44 to capture silver.

The 32-year-old Calgarian almost didn’t make it to Sochi. In mid-January, he herniated a disc in his lower back while lifting weights at the gym. “Four week ago, I couldn’t get out of bed, and I didn’t know if I would be able ski at all this season,” he said. “It was brutal, and I couldn’t walk for three days.” But intense treatment—and an iron will—soon had him back on the slopes. Still, after a disappointing 21st place finish in his first race of the Games, the men’s downhill last weekend, it seemed that his crowning Olympic achievement would simply be participating.

Hudec, one of the original “Canadian Cowboys” has had flashes of brilliance in his ski career, winning a silver in the downhill at the 2007 world championships, and taking gold at a World Cup race in Lake Louise that same year, and again topping the podium in Chamonix, France in Feb. 2012. But mostly, he has been snake-bit by injury, suffering through back problems, and blowing out the ACL in his right knee, four times, and the same ligament in the left one, in the run up to the 2010 Vancouver Games. He made it back from surgery, but was hardly a medal threat, placing a distant 25th in the downhill, and 23rd in the Super G.

After the downhill in Sochi, where Erik Guay was the top Canadian, placing 10th, Hudec let it be know that he and his teammates were deeply dissatisfied with their performances. “We came here for a medal,” he said.

Now, Hudec, who earned the nickname Panda for his slightly roly-poly looks, and has been drumming in rock bands since he was 15, has fulfilled that goal.

It’s the end to a remarkable journey that started when he was just an infant and his family defected from what was then Czechoslovakia by sailing a homemade boat across the Adriatic Sea during what was supposed to be a vacation in Yugoslavia. They spent four years as refugees in Germany—where Hudec learned to ski—before arriving in Canada. The family barely spoke English, but his father, Jan Sr., was a good skier and found a job coaching with a local club in Red Deer. A year later, they all attended the Calgary Games as spectators and the younger Jan caught the Olympic bug.

At the finish line, fresh from the victory podium, Hudec reflected on just far he has come. “I just feel really thankful and blessed.” he said. “It doesn’t feel like it is my medal because there are so many people who helped me get to this point and help support me and stuck with me throughout the years. This is just the icing on the cake.”

And a lucky medal 13 for Canada.