The flying Santa of Kuujjuaq—brother of Governor General Mary May Simon—is getting down to earth. Or so he says. 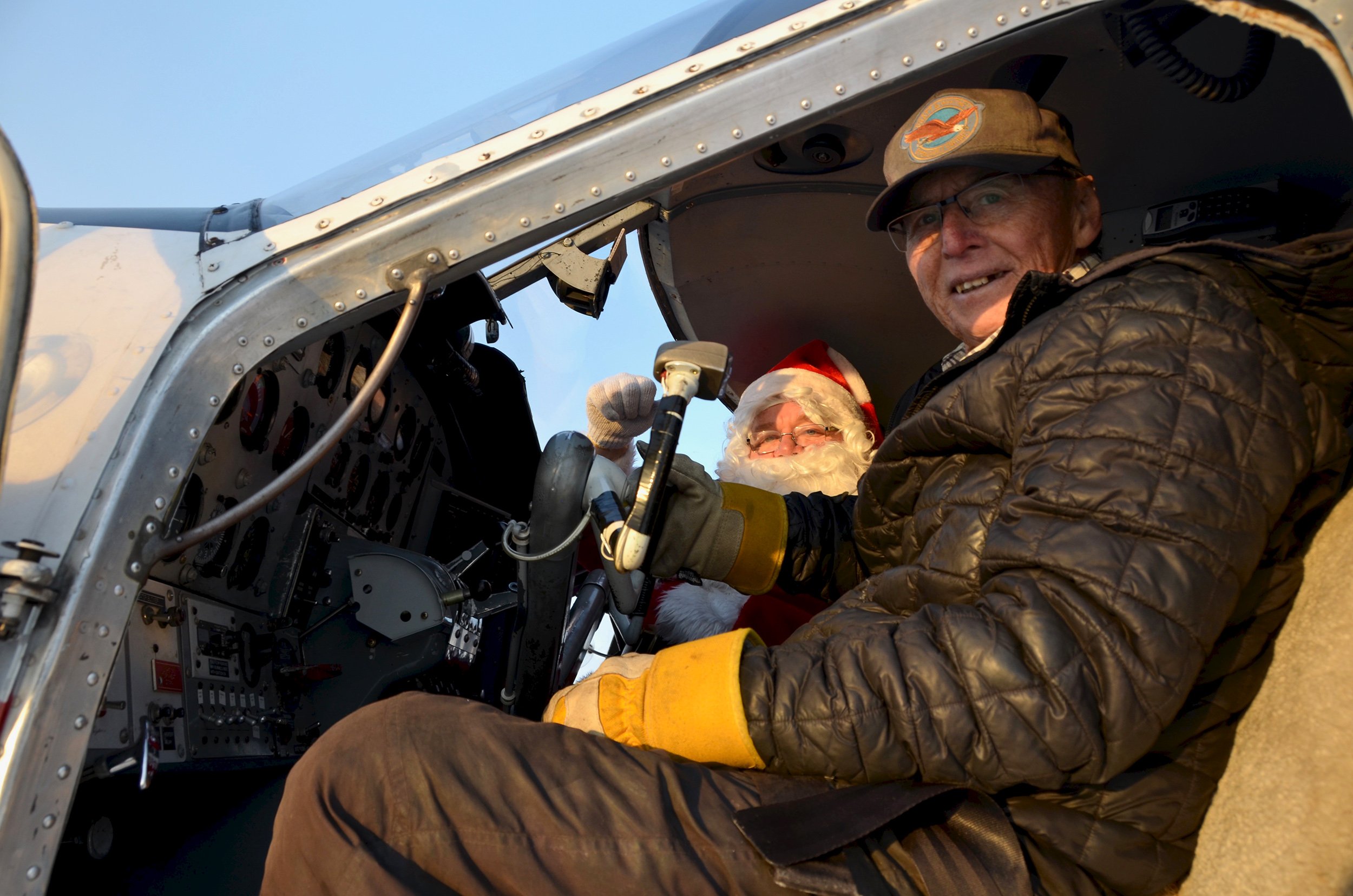 Nunavimmiut await the treats delivered to Kuujjuaq by May (Isabelle Dubois)

In the far northeast of Quebec, in a community up the river from Ungava Bay, generations of villagers have known of a second man who flies over with gifts every Christmas. Everybody in this place, young and old, believes in Johnny May.

Wiry, bespectacled and fairly jolly, May has long made a habit of rising early on Dec. 25 to prepare his beloved De Havilland Turbo Otter DHC-3 for a special mission. If the weather’s clear, the bush pilot lifts off and flies unusually low over a field in his native Kuujjuaq, where throngs of Nunavimmiut watch and wait below. The back hatch opens, and May’s helper elves hurl candy and other gifts into the snow for kids and giddy adults alike to grab.

May’s candy drop was an annual tradition from 1965 to 2019, and he’s still flying, while his hands, eyesight and wits remain in cockpit-ready medical condition.

But last year’s event was grounded for the same reason nearly everything fun and wondrous was in 2020: the pandemic. And this year, at 76, he’s decided on his own accord to spend Dec. 25 on terra firma. After 55 years, the man behind the Great Northern Candy Drop wants Christmas off, like the rest of us.

Federal bureaucrats had tried unsuccessfully to curtail his holiday drop out of purported safety concerns. And May had tried himself to end the tradition, saying in both 2015 and 2016 that he was doing his last one, only to fly again due to popular demand. 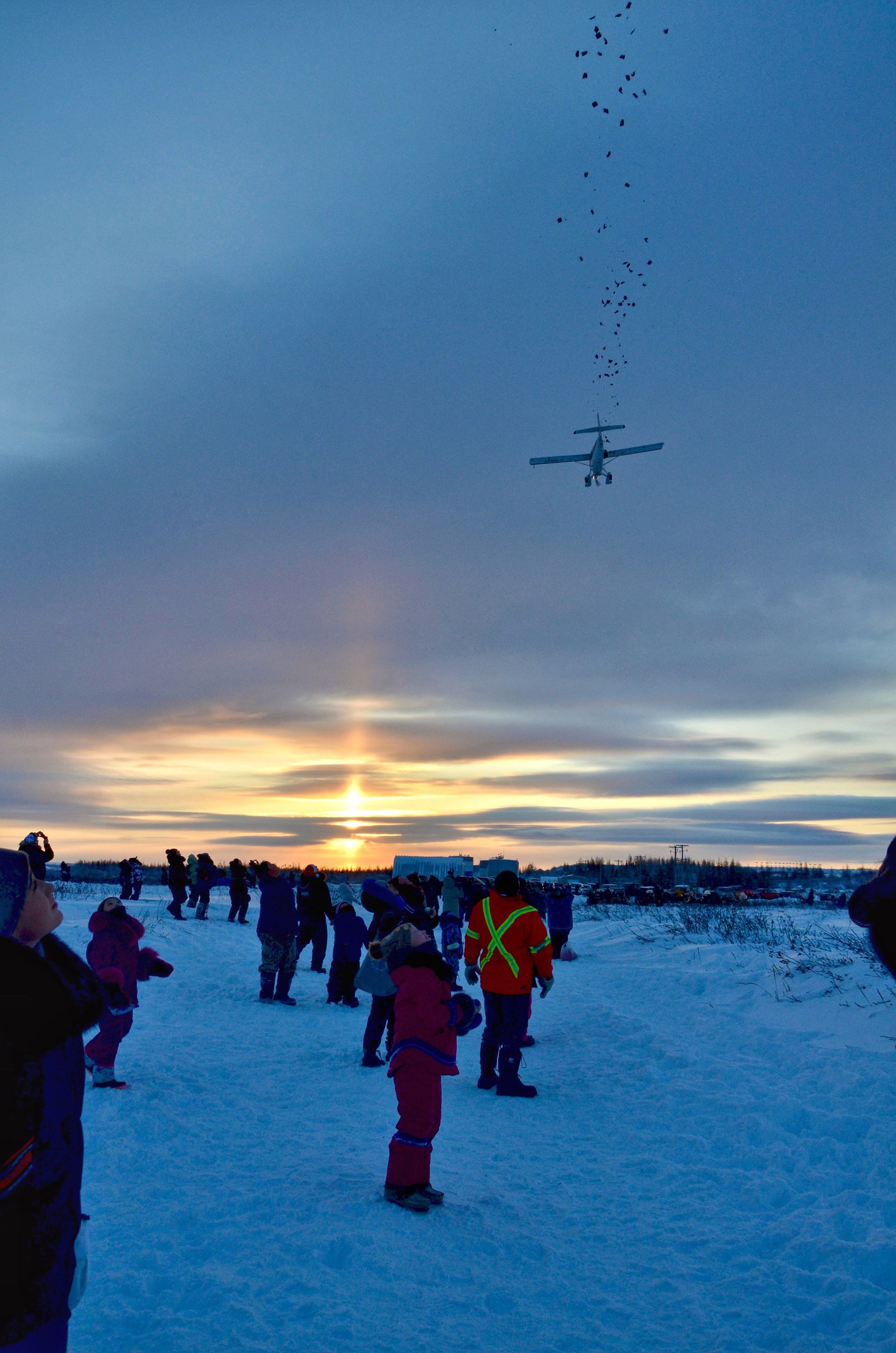 But this time he sounds serious. Though he still flies several runs a week to nearby hunting and fishing grounds and mines, he says from his home in Kuujjuaq that last December “was the first Christmas that I really relaxed, knowing I wouldn’t have to fly, or check the weather a couple days ahead to know if it would be okay.”

MORE: This Nunavut grocery store receipt shows just how pricey food is in the North

May was born in 1945, one of eight kids of Bob May, a Hudson’s Bay Company trading post manager, and Nancy Angnatuk, an Inuk woman, at a time when HBC discouraged post managers from marrying Inuit. On a trip to his dad’s fishing camp, a pilot invited young Johnny into the cockpit and let him handle the controls. He was hooked, and wound up taking lessons in Pennsylvania, where local press photographed him and labelled him, with the offhanded racism of the time, “the flying Eskimo.” In 1962, he became the first Inuk pilot in Eastern Canada.

As a bush pilot, he’d ferry supplies, hunters and medical patients throughout the Nunavik region. The Christmas flight was inspired by something from his own youth, when Hudson’s Bay staff stood atop large buildings and tossed down candy canes and other sweets. May reckoned he could do one better.

Starting in 1965, he would outfit a friend or two with safety harnesses in the back of his single-engine aircraft, named Pengo Pally—Inuktitut for “I miss you,” a message to his wife. Approaching the crowd of candy lovers, he’d swing the plane low and holler back when it was time to open the hatch and drop the goods. “Usually I’m yelling my head off for the boys in the back,” he recalls. “After the candy drop my voice is a bit hoarse.” A hearty turkey dinner and party with friends would soothe his throat and spirits.

May initially dropped candy over the streets of Kuujjuaq, now a 2,750-person village, but gradually moved the Christmas drop to a road and field by the airport. The village’s Pinguatitsijingiit Recreation Committee pitched in to enhance the flight’s payload, and in recent years candy is only about one-tenth of what his plane has dropped. The rest has been clothing and gifts, including bigger prizes like a TV. (No, he doesn’t drop a television from a few hundred feet—it’s a large envelope containing a certificate.)

May kept up the tradition until he was almost thwarted in 2004. That’s when, he suspects, a busybody federal bureaucrat read an online account of the Kuujjuaq candy drop. That spring, he got a warning that Canadian aviation laws forbid planes from flying low over crowds, and was told he could be fined up to $1,000. After a bit of back and forth with Transport Canada and locals, May says, the mayor offered to pay any fines. Transport Canada relented. “They didn’t want to be the bad guys in the public view,” he says.

The department began granting May a yearly waiver giving him special permission to break the aviation rules once between Dec. 23 and Jan 2. (Poor weather has forced him to postpone the flight a few times.) The tradition continued, inspiring a children’s book, which was made into a 2017 CBC holiday cartoon, The Great Northern Candy Drop.

In 2020, when a mass gathering in a Kuujjuaq field was forbidden, two of May’s helpers devised a different method of candy delivery. They put cardboard wings on a pickup truck, wrote “Pengo Pally” on the side, and even added a little plane tail to the rear end bearing the Otter’s call sign, C-GMAY. The pair hurled candy out the truck window to excited children. May enjoyed hearing the kids, and seeing their smiles.

Can the children of Kuujjuaq once again persuade him to pursue an emergency Transport Canada waiver? Anything is possible, but May has already said he’s keen to do another candy toss from the truck. And it’s not just that he’s feeling his age. This Christmas, the veteran pilot is content to let his younger sister, Mary May Simon, make the bigger yuletide splash—delivering greetings to all of Canada in her first winter as Governor General.

CORRECTION, Dec. 2, 2021: An earlier version of this article referred incorrectly to Nunavummiut, who are people from Nunavut. Kuujjuaq residents are Nunavimmiut, people from Nunavik in northern Québec.

This article appears in print in the December 2021 issue of Maclean’s magazine with the headline, “Good to the last gum drop.” Subscribe to the monthly print magazine here.