He pursued acting rather than join the family business, but was never comfortable with his fame as the 18th-century vampire Barnabas Collins 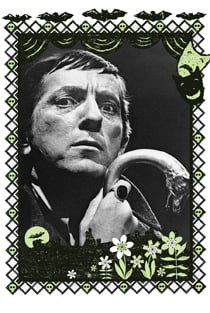 John Herbert Frid was born on Dec. 2, 1924, in Hamilton, Ont., the youngest son of Herbert Percival Frid, a wealthy construction executive, and his wife, Isabella Flora Frid (née McGregor). His father was a pillar in the community—hospital builder, member of McMaster University’s board of governors, citizen of the year—but John had little interest in joining the family business. “His first love was theatre,” said his cousin, Barbara Wilson. “He had such a beautiful voice.” In high school, John’s friends called him “Mort” because he looked so much like Edgar Bergen’s dummy, Mortimer Snerd.

After a stint with the Royal Canadian Navy during the Second World War, John enrolled at McMaster, immersing himself in the drama society. With his parents’ blessing (and their generous financial backing), he continued his theatrical training, first at London’s Royal Academy of Dramatic Art and then at the Yale School of Drama, where he earned a master’s in directing. Over the next decade, while living in New York, John made his Broadway debut and shared scenes with Katharine Hepburn. By then, he had changed his first name to Jonathan.

In 1967, Jonathan received the phone call that would change his life—transforming a 42-year-old anonymous actor into a national heartthrob. On the other end of the line was his agent, informing him that he had won a bit role on a floundering, low-budget ABC soap opera called Dark Shadows. He had been cast as Barnabas Collins, an 18th-century vampire resurrected into a 20th-century world. It was supposed to be a short-term character; according to the original script, Barnabas was destined to take a wooden stake to the heart within a few weeks. But Jonathan’s performance was so powerful—his portrayal of a reluctantly fanged, guilt-ridden bloodsucker such a hit with audiences—that he literally saved the show from its own impending death.

Ratings soared, not only among stay-at-home moms, but millions of baby boomers who rushed home from school to catch the latest episode until 1971. The merchandise soon followed: comic books, trading cards, board games and novels, each one plastered with Jonathan’s ghoulish face. Johnny Depp was among the countless kids who had a poster of Barnabas Collins hanging in his room. At the show’s peak, Jonathan received 6,000 pieces of fan mail a week—“I wish you’d bite ME on the neck,” wrote one woman—and he couldn’t leave his New York apartment without being mobbed. “People come up to me and they really believe I am a vampire,” he told one interviewer. “They really think I might bite them at any moment.”

Even after the show was off the air it remained a cult classic, dissected by rabid fans for decades to come. And as hard as Jonathan tried, he could never quite break free from the character that made him famous. “For the longest time, he kind of denied Dark Shadows,” says Dave Howitt, one of his nephews. “He was the reluctant vampire, and he was somewhat the reluctant star.” Said Don Frid, another nephew: “I don’t think he really liked the fame that went with it. He did the extracurricular activities—doing talk shows and meeting fans—but that wasn’t his style. He wasn’t in it for the glory.”

His post-Barnabas career included a starring role in Oliver Stone’s directorial debut, Seizure, and an acclaimed performance in the Broadway revival of Arsenic and Old Lace. But by the 1980s, Jonathan accepted the inevitable: in the eyes of many, he would always be that vampire. He even attended some of the fan festivals.

In 1994, with his 70th birthday approaching, Jonathan packed up his Manhattan apartment and moved home. He bought a house in picturesque Ancaster (now part of Hamilton) and spent his days tending the garden and enjoying relative anonymity. At local restaurants, he was the big man with a cane in one hand and a vodka on the rocks in the other. He hired a technician to launch jonathanfrid.com and continued travelling to New York for conventions. Last year, at 86, he flew to London to film a cameo appearance in Tim Burton’s upcoming remake of Dark Shadows, starring Johnny Depp.

Early on Saturday, April 14—weeks before the movie’s release—Jonathan died of pneumonia. He never saw his final performance. For whatever reason, news outlets reported the original Barnabas Collins passed away on Friday the 13th. “It makes for good press,” said Howitt. “But it’s good to get it right.”