He was a rising star as a chef. He found a passion for local food, helping plant gardens and educate kids. 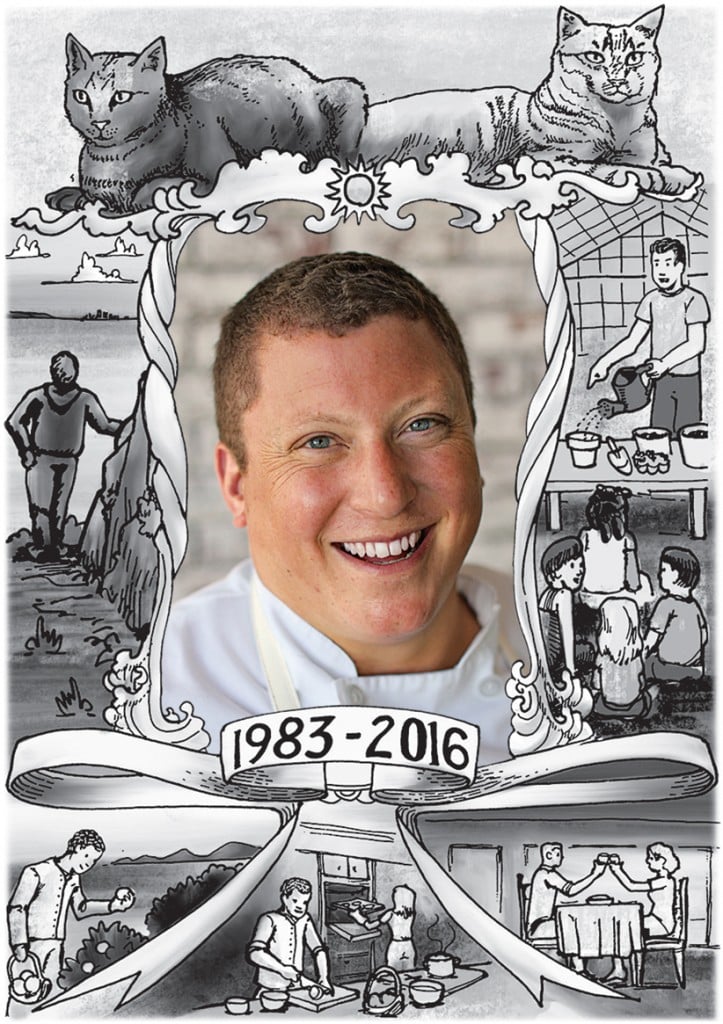 Jonathan Robert Sobol was born June 26, 1983, in Edmonton, to Gina, a nurse and Bob, an RCMP officer. He was the middle child, two years apart from older sister Denise and younger brother Thomas. When Jonathan was five, Bob was posted to the small farming town of Fairview, in northwest Alberta, near the B.C. border.

Jonathan, Jon to friends, attended school in Fairview. The blue-eyed boy with curly hair was the family scholar, always making the honour roll. He enjoyed baseball and soccer, even though he was never the best athlete on the field. Jon was a good kid, often helping his dad prepare meals for the family. He wanted to join the RCMP one day, just like his father.

When Jon was 17, he travelled to France on a Grade 12 Rotary Club exchange. Much to his shock, his host family wasn’t overly welcoming and they didn’t eat meat, subsiding on mostly vegetables and some fish. The once-sturdy kid dropped nearly 40 lb. over that year. His parents said he could come home, but he refused. “His attitude was, ‘I’m going to go through with this and complete the program,’ ” says his father, Bob. “Jon focused on the positive things.”

When Jon returned to finish his final year of high school, his RCMP dreams had shifted. “There was absolutely no doubt in his mind that he wanted to be a chef,” says Bob. He graduated in 2002 and got a job at the Rimrock, a four-star hotel in Banff. He started in the staff kitchen, but was promoted to the hotel’s Primrose Dining Room after just one day. A week later, the teen was manning the omelette station for Sunday brunch. The Rimrock paid for Jonathan’s Red Seal chef training. He was promoted to kitchen supervisor. Standing over six feet tall with broad shoulders, Jonathan was a commanding presence in the kitchen.

Jon also developed a deep love for the Rocky Mountains, hiking, climbing and mountain biking on days off.

In 2007, Jon left the Rimrock to work as a private chef for a wealthy Calgary client. When the client went on vacation, he said Jon should take his own vacation. Rather than lazing on a beach, Jonathan took a “vacation” working an unpaid internship at the Fat Duck, a Michelin-starred restaurant in Berkshire, England.

He married in 2010 and moved to Ottawa where he worked at a golf club and then Play, a small-plates wine bar and known hangout for politicians near Parliament Hill. His marriage ended after less than a year. On a trip back to Alberta to meet his newborn nephew, he asked himself: “Why am I in Ottawa, so far away from my family?” He moved back to Calgary for good and eventually became executive chef at Farm, a small restaurant owned by Janice Beaton, who is known as a champion of local food. Jon’s passion for local food flourished at Farm. He developed relationships with producers, travelling to Calgary-area farms to meet the men and women who grow food and raise livestock.

In 2015, he took the executive chef position at Starbelly, an upscale casual restaurant in south Calgary. Jonathan was excited to apply his local food philosophy to a larger 175-seat venue. He put in 10- and 12-hour days. He would come home from work, crack a Steam Whistle Pilsner and cuddle with his two cats, Lola and Jackobin, which he adopted during one of his farm visits. He made time to help raise funds for a community garden at the hospital near Starbelly, and he volunteered at a nearby elementary school garden where he taught kids about growing and cooking their own food. He also planted a backyard garden with Aryn and Lucas, his niece and nephew.

In February, Jonathan got a Facebook message from Katelin Bland, a pastry chef whose parents lived down the street from Bob and Gina. She had recently moved back from Vancouver and bought a house near Starbelly. “I asked him out for coffee and he flipped it around and asked me out for dinner,” Katelin says. They had an instant connection. “We really and truly were soul mates,” Katelin says. They had moved in together by June, talked about having kids and planned to open their own business, a pie shop where Jon could finally be his own boss. “He was the happiest he’d ever been in the last seven months,” says Gina.

On Aug. 30, Jon was returning from a visit to a pork farm, northeast of Calgary. Alec Bracegirdle, a 20-year-old aspiring filmmaker, was also in the car, accompanying Jon to shoot promotional video for Starbelly. The pair collided head-on with a van northeast of Calgary. Both were killed instantly. Jonathan was 33.