He started his own logging company, survived numerous accidents and watched his mill burn to the ground 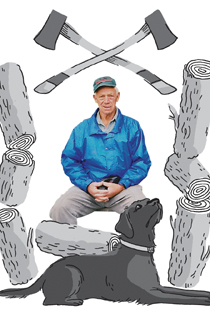 Kenneth Victor Williams was born on June 21, 1929, in Victoria, the eldest of six children. His father, Victor, worked in logging and on the railway. Mother Lillian was a teacher. As a child, Ken was intensely hyperactive. “He was probably one of the original ADHD children, he just went so much,” says his daughter, Sandra Quesnel. Big for his age, with enormous hands and a shock of dark wavy hair, Ken quickly put his energy into earning money clearing brush or picking potatoes for neighbours. He had made enough by the time he was 12 to buy his own clothes and schoolbooks and bought his first car, a Ford Model T, when he was just 14.

While he was still in high school he met Josie Williams, three years younger, whose family had moved to Duncan from the Okanagan. Marriage, in 1949, seemed natural since, by coincidence, the two already shared a last name. He photographed Josie perched on a tree stump, a picture that long graced the family photo album. It was only years later that Josie discovered she was the last in the line of four girls Ken had photographed atop a stump.

They had three children: Sandra, the eldest, and two boys, Victor and Jim. Family activities often revolved around teaching the children the value of a hard day’s work. Ken had them pull spikes from an old railway used as a logging road, for a penny a spike. When Sandra was 12, Ken enlisted her to help move his logging equipment up a hill. Behind the wheel of a pickup, Josie following in a dump truck and Ken towing a bulldozer, Sandra missed a gear and stalled, sending the procession to a halt. Ken “came stomping up the road and I was ready to run,” Sandra recalls.

Forestry was a way of life in Cowichan Valley and Ken took to it with enthusiasm. After high school, he worked as a contract logger, eventually saving enough to buy his own equipment. He started Ken Williams Logging in 1950 and later Kendon Recovery with friend Don Blundell. In 1974, Ken built his own sawmill from scratch with the help of family and friends. At its height, the mill had 11 full-time employees.

His interest in foresty was not dampened by a series of accidents. Once, he was crushed by a load of logs that fell from the back of a truck, breaking his legs and pelvis. He spent three months in hospital and doctors told him he might never walk again. Three days after he was sent home, he was back to logging. Later, he fell off a machine, breaking his ribs. When he was 35 and working on a yarder, a wire cable called a haulback line snapped and struck Ken in the face, breaking all his teeth. “It took half his face off,” says Josie. “It just about slit his throat.”

Ken had surgery, but there were complications. For awhile he had to shave the inside of his lip and when he drank tea, some of it leaked down his chin. From then on, Ken made a point of approaching any stranger with a scar or birthmark to chat about how they were coping with their disfigurement.

By 1991, Ken had decided to sell the mill. The deal was to close on a Monday. On Saturday, Ken’s birthday, Sandra called to say the mill was on fire. Neighbours had been protesting the sale over fears the buyer would run the mill non-stop. Ken lost everything. “Mom and dad were both different after that,” says Sandra. “Things were not as much fun for them. It was a big part of their lives and they just had to walk away and let go.”

The loss of the mill pushed Ken and Josie to do more travelling. They had purchased an old bus in 1987 and Ken had spent six months converting it into a motorhome. They named it the “Dawghouse” after the black Labrador retriever that was always by Ken’s side. They drove from Alaska to Mexico, spending every winter in points south. Ken started the Vancouver Island chapter of the Family Motor Coach Association and one year won a bus rodeo in Indio, Calif., for navigating his RV through an obstacle course.

This winter, for the first time in 27 years, they decided to stay home. Ken spent it felling trees for firewood. On April 10, Ken set out to cut down a large maple, taking his son-in-law, Wayne Quesnel, with him. He propped up an excavator against the base of the tree to keep it from falling the wrong way. The excavator was positioned too low. It slipped and the trunk snapped. Ken was killed instantly. He was 82. After he was cremated, his ashes were placed in an urn that Quesnel, a woodworker, built from cedar saved from the family sawmill.