Lemmings' mysterious population cycle may finally have an explanation

The 'Arctic chicken nuggets' have strange boom-and-bust cycles, which led to the story that lemmings commit mass suicide when they become too numerous. That's false. These scientists may have the real answer. 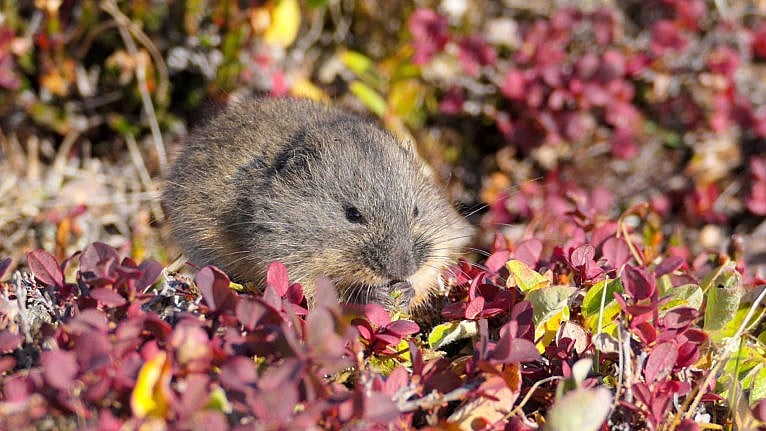 Lemming in the leaves: the ‘little chicken nuggets’ are critical to the Arctic food chain (Gabriel Bergeron)

If you know less about lemmings than Dominique Fauteux does—and you almost certainly do—then what you do know about lemmings is likely false. And it probably goes something like this: lemmings follow each other around in a brainless herd, and when the mood strikes them, they will commit mass suicide by jumping off any accessible cliff.

The legends, misunderstandings and outright fraud that added up to that reputation are based on the mysterious population cycles that make the tiny rodents fascinating to Fauteux, a research scientist in zoology at the Canadian Museum of Nature’s Natural Heritage Campus in Gatineau, Que. Lemmings undergo population cycles that last three to four years, during which their numbers can fluctuate a hundredfold.

So Fauteux and his team—they work each summer at research sites on Bylot Island and Cambridge Bay in Nunavut, and near Salluit in northern Quebec—will see an “outbreak” with a bumper crop of lemmings one year before their numbers drop to near zero the following year, and perhaps stay that way for another season before suddenly exploding again. “You have a new outbreak, with lemmings all over the place,” Fauteux says. “You have to be careful to not step on them.”

MORE:  What does it take to move a rotting whale carcass? Glute strength and Vicks VapoRub.

Those strange boom-and-bust cycles led to the story that lemmings commit mass suicide when they become too numerous. But it was the 1958 Walt Disney Productions film White Wilderness that cemented that myth, with footage of lemmings charging off a cliff. It was billed as a documentary, but the scene was faked, with people behind the camera herding the animals to their staged deaths. “You can see distress in the lemmings,” says Fauteux of the scene. “You can clearly see that when they fall over the cliff, they were absolutely not prepared for that.”

The real reasons why their populations fluctuate have been the subject of scientific intrigue for decades. And after massive numbers of lemmings were observed last year earlier than expected in their population cycle, Fauteux and his team hope to be able to solve this enduring puzzle in 2022.

Lemmings are unusual rodents in that they breed over the winter, beneath the snow. One female can reproduce four to five times over the nine-month Arctic winter, with up to seven babies per litter. Fauteux’s team believes predation is what drives the dramatic population trends, but how that might occur involves a complicated web of six degrees of Arctic separation.

MORE: The beetle scientist on a mission to name the world’s most beguiling beetles

Lemmings are prey for snowy owls, long-tailed jaegers, hawks, falcons, cranes, Arctic foxes and ermines. “They’re the ones being eaten because they are easier to find, easier to catch, and they are all over the place,” Fauteux says. “They’re just like little chicken nuggets running over the tundra.” All the birds on the lemming predator list migrate, leaving the last two as the only winter predators.

Fauteux’s team hypothesizes that the ermine is the X factor, because they are not present in the ecosystem every year, yet researchers see lemming populations decline when they are there. To test this, after the snow melts in June, the researchers will collect and examine lemming nests built out of dried grasses. Arctic foxes can’t fit into the nests, so any evidence of predation—a scrap of skin, say, or a severed paw—points to ermines as the executioners. The ermines’ efficiency at killing the lemmings could explain why there are years when their population doesn’t rebound. Fauteux’s team has wooden boxes they use to trap lemmings for study, and they returned one summer to find the ermines had turned one into a winter pantry. “It’s a bit disgusting,” he says. “We found 28 carcasses of lemmings stashed in one.”

They have observed that when there are many snowy owls—which prey on ermines—the decline in lemmings doesn’t occur. That might in turn explain the fluctuation in ermines.

One effect of climate change that could affect lemmings is more frequent rain-on-snow events, which create a hard ice layer that makes it difficult for them to dig their nests. Fauteux’s team tested this in the lab by simulating rainfall on snow samples they collected, then watching the burrowing of the lemmings they trapped to study. The lemmings switched from using their claws to using their teeth in order to break through the ice. Fauteux finds this adaptation impressive, but says it could eventually require too much energy from them, leading to death or reduced reproduction. “In the end, we don’t expect that the lemmings will disappear,” he says, “but we certainly expect that the peaks, the amplitude of the cycles, will go down.”

These little Arctic chicken nuggets are critical to the rest of the food chain above them. In Norway, Arctic foxes relied on lemming booms to reproduce well, and their population is now endangered. In Greenland, there was no lemming outbreak for eight years, and snowy owls declined 98 per cent in the same period. “It’s no wonder that, since 1924, famous ecologists have been studying them,” Fauteux says. “In an ecological way, they are really mysterious.”

When he was a student, Fauteux would spend three months every summer in the Arctic, in his estimation “one of the most beautiful places on Earth.” Even when he’s focused on specific scientific questions, he says, “You see everything connected, everything happening at the same time.” Now that he has greater responsibilities, Fauteux’s time in the field is shorter, and those are the weeks of 2022 that he’ll be waiting for.

This article appears in print in the January 2022 issue of Maclean’s magazine with the headline, “When life serves you lemmings.” Subscribe to the monthly print magazine here.