Letters: 'The world is made up of more than just the U.S.A.' 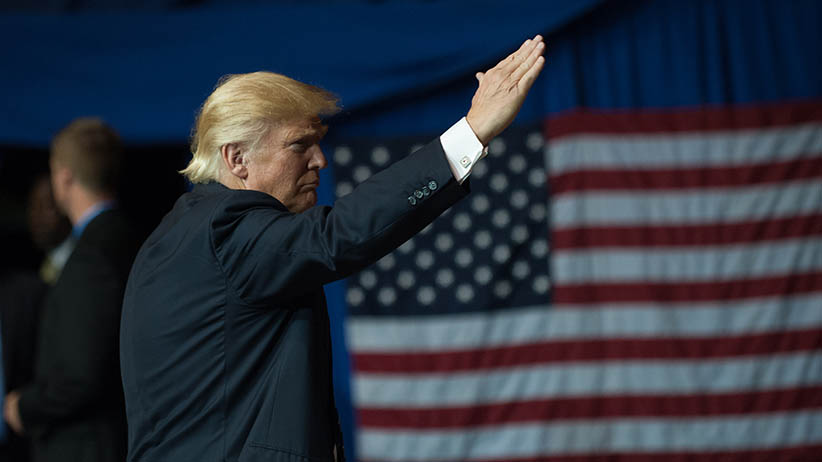 You have been persistent and most certainly consistent in your criticism of one Donald Trump for months (“Could this get any worse?” International, Oct. 31). You are apparently ignoring that there are millions of Americans—deplorable as they might be, according to Hillary Clinton—who will vote for him regardless of what you and others may think. Is there anything at all that may be good about Donald Trump that millions but you seem to detect? God bless us if he would be elected! We shall have to get used to him, as you suggest in your cover headline, just as he will have to get used to us, his country’s best friends.

Your front cover claims, “Donald Trump has created a toxic mess that’s going to poison U.S. politics for years to come.” Obviously Maclean’s is part of the mainstream media that poisons our collective lives with the slanted and extremely biased reporting CNN, NBC, CBC, etc. are guilty of. What about reporting the truth about Crooked Hillary? What about the protracted and deliberate destruction of 30,000 emails that “was a mistake”? What about the slanderous putting down and utter dismissal of the women her husband abused? And finally, what about the proven abuses of the campaign she has been implicitly linked to? Your coverage is shameful.

I will be so very happy come December when election season in the U.S. is over. There is so much more going on in the world than the American presidential election. Your Oct. 31 issue devoted 13 out of 66 pages to covering either Trump specifically or the election in general. Including Trump’s picture on the cover, that’s just shy of 20 per cent of the entire magazine. Four out of five articles in the International section were about the U.S. election. Where was the story on António Guterres, the newly named successor to Ban Ki-moon? What news of the Calais refugee camp that is causing so much uproar in both England and France? And how about an exposé on the world’s longest-serving head of state, the recently deceased King Bhumibol Adulyadej of Thailand? If you’re going to have an International section, let’s acknowledge that the rest of the world is made up of more than just the United States of America.

You do not examine why Trump is the Republican nominee: the justifiable anger toward the incompetent and divisive Obama presidency, the betrayal of the Republican establishment in keeping its promise to fight Obama policies, Hillary Clinton’s failure as secretary of state and corruption on multiple levels, and finally, the deplorable state of affairs in the U.S. Initially, I was not a Trump fan but frankly, reading articles in Maclean’s has changed my mind. I find the in-your-face language quite refreshing and I am glad to see the entitled political class squirm. I just wish that Maclean’s would do its job, to investigate with zeal and report with vigour!

I find Donald Trump’s assertions of modern voter fraud incredible, but history often provides examples of unbelievable events.The 1960 election that pitted John Kennedy against Richard Nixon produced an extremely close popular vote, and voter fraud in that contest was extensively researched and shown to be widespread. A telling example (but far from being the only documented one) was seen in a Texas riding, where Kennedy received 187 votes to Nixon’s 24, though there were only a total of 86 registered voters in the precinct. No reasonable person would expect a repeat of these events, but let’s not pretend that things like this have never happened before in the U.S.

Our duty to Dallaire

Brian Bethune wrote an extremely touching article on the horrors Roméo Dallaire has to face on a day-to-day basis (“The other hell,” Oct. 31). I cannot ever recall being so emotionally overcome by the profound sense of sadness I felt reading both about Dallaire’s plight with PTSD after his stay of duty in Rwanda, and the horrific events of genocide taking place in that country at that time. This was powerful storytelling about a dark time in recent human history and its lingering effects. I hope this article touches enough souls to provide the ongoing impetus required to eviscerate the aura of shame and weakness pervading the perception of PTSD. We have a national moral obligation to repair the bond between our country and its military, and stand by those who serve and suffer on Canada’s behalf for their entire careers and post-military life.

A hard look in the mirror

After reading “The other runaways” (National, Oct. 31), about Indigenous boys running away from residential schools, I am not sure if Canada’s government would be very much entitled to complain about the human rights abuses of China or any other country. As a wise man once said, “He who is without sin can cast the first stone.” I hope the lesson has been learned and never repeated again.

Elizabeth May more than anyone should know that the U.S. does not have a two-party electoral system (“Tampering with the heart of democracy,” Evan Solomon, Oct. 31). They have two well-financed parties and then less well-accepted parties, such as her own!

Justin Trudeau has spent the year handing out borrowed money to middle-income Canadians, but on the economic front little has been achieved (“Waiting for the payoff with big deficits,” National, Oct. 24). The only pipeline approval, the LNG development, was so loaded with conditions it was meaningless. The Bombardier loan is being negotiated with no end in sight, the regulatory environment is as tough as ever and agitators opposing new projects are being encouraged directly and indirectly. Someone has to tell this government that prosperity comes from growing production, not by building infrastructure with borrowed money.

PR would boost the far-right

Most people in Canada seem to feel that the main beneficiaries of proportional representation will be parties on the left (“Reforming the reformers,” National, Oct. 24). But similar systems in Europe have demonstrated that it is parties on the right that have used proportional voting to get political representation and gain legitimacy. The Dutch Party For Freedom, which is well to the right of Donald Trump, is forecast to get 27 seats in the next election, making it the largest party in a highly fragmented 150-seat legislature. If Britain had this system, the UK Independence Party would have 82 seats rather than one and would be a major player in the inevitable coalition government. It seems to me that the choice we are being offered is between a system that will consolidate power in the hands of the two major existing parties and a system that will produce a multitude of special interest parties. My hope is that the Liberals will agree to a referendum and the Canadian public will show greater wisdom than our politicians or the media. The present system, while not ideal, is better than the alternatives.

Zane Schwartz’s book review of Patrick Cockburn’s The Age of Jihad (Oct. 24) highlights the author’s central insight that CIA drone strikes are both irrelevant and ineffective in deterring terrorism and are “largely designed to make Americans feel better.” But that is beside the point, absurd and totally abhorrent. Barack Obama, a liberal constitutional lawyer who directs the American drone strikes as judge, jury and executioner—often killing entire families—absurdly holds his Nobel Peace Prize in one hand while holding in his other a bloody drone gun with more notches than Billy the Kid and his ilk could ever have dreamt of. Obama’s main concern is not that he is committing crimes against humanity but whether or not American drone strikes are efficacious in the so-called war on terror. As Shakespeare pointed out, “Murder most foul, as in the best it is.”

At last. A national price on carbon is essential to meeting Canada’s commitments to reduce CO₂ emissions (“The Tories are stuck in the past on carbon,” Evan Solomon, Oct. 24). It recognizes that polluters (including ourselves) must pay for the damage our carbon footprints cause to the air, water and biosphere that support all life. A significant and rising price will promote conservation, energy efficiency, and innovation, and will drive transition toward the green economy that is vital to a livable future. A national policy can also protect Canadian business and encourage similar policies elsewhere through border tariffs on imports from nations with no carbon pricing. A 2013 study for Citizens Climate Education of the 20-year impact of a similar carbon fee and dividend policy in the U.S. concluded that CO₂ emissions would be reduced by over 50 per cent, alongside ongoing creation of skilled permanent jobs and robust GDP as well as regional economic growth. Fighting climate change with fairness, public acceptance and economic results like these should convince even the most skeptical premiers.

Liberal MP for Scarborough Southwest, Bill Blair, recently told Maclean’s he gets up to 30 immigration cases a day at his constituency office and his office aims to help each and every one (“A police chief legalizes marijuana,” National, Oct. 10). Blair is not alone in this approach—Samara Canada’s series of exit interviews with 80 former members of the 38th, 39th and 40th Parliaments found that helping constituents sort out red tape generated the most job satisfaction for MPs across all parties. It sounds like little has changed in the 42nd Parliament: MPs are still involved in shepherding thousands of immigration, taxation and other files through the application process. This situation begs the question: shouldn’t the root of this problem—the way government programs and services are delivered—be fixed? This would allow all Canadians to have the same quality federal services without the need to contact their elected official, and it would also allow MPs to devote much more time and energy to their unique responsibilities as Parliamentarians.