Letters: 'Who gets privilege of defining Canadian values?' 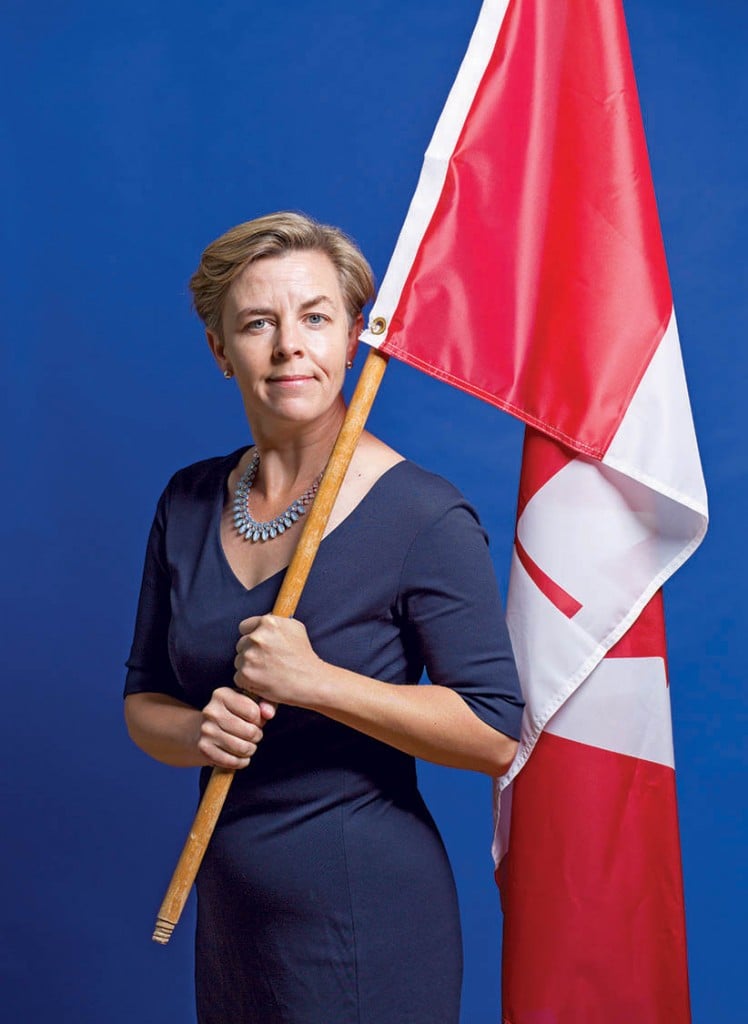 Who gets to get in?

Conservatives are often stereotyped as anti-immigration, but Stephen Harper’s government increased the annual goal of immigrants to 280,000 from 250,000 in their last years of governing. Throughout, the Canadian government maintained a rigorous selection process, which allowed for immigrants to undergo smooth integration and experience the fullness of Canada’s opportunities. So why, with all of this success, safety and prosperity, would Kellie Leitch propose legislation to divide not only Canadians but the Conservative party itself (“Values testing Canada,” National, Oct. 3)? Who gets the privilege of defining Canadian values? Without specifics, and without necessity, the legislation Leitch is proposing is being used to garner support for her candidacy in the Conservative leadership race.

While Kellie Leitch’s opponents decry screening immigrants for their values, let those critics declare they are in favour of allowing those who believe in “honour killing” to immigrate to Canada. Anyone who can be demonstrated to have a high probability of committing a criminal offence after immigrating to Canada should not be allowed to immigrate. Those are reasonable grounds for denial of residency. This does not demonstrate the intolerance to which your cover story refers, but it does demonstrate intolerance for murder, crime and inequality. Let’s not wait for another Shafia case.

I am from India and I became a proud Canadian citizen in 2011. I was motivated to migrate to Canada because my personal and family values aligned with the Canadian values of dignity, honesty, fairness, trust, equality, transparency, among others. I find nothing wrong in Kellie Leitch’s proposal to test new immigrants for their values. I propose a value-based immigration criteria instead of quota-based or skills-based criteria. Skills can be acquired. Values are critical for integration into Canadian society. In the last 15 years, the Internet and cheaper flights have made it easy for the new immigrants to continue to be connected with their countries of origin. As a result, even though physically they live and work in Canada, the heart, mind and emotions of most of the new immigrants stay with their country of origin—thereby making it impossible for them to integrate. It is for these reasons I support Kellie Leitch’s proposal whole-heartedly.

My father was raised in apartheid South Africa and immigrated to Canada with my British mother in the early ’60s (“Values testing Canada,” National, Oct. 3). His apartheid beliefs were not passed onto my sister and me. One evening when we were young adults, he became very emotional and was upset how he and others had “treated the blacks” in his native country. He had long since rejected his upbringing but the past behaviour still upset him. People can change and the opportunity to experience other cultures and countries can affect not just one person, but an entire family. We can all gain from each other’s unique lives,
no matter where we were raised. If my father had been screened, I’m afraid none of my family would be proud Canadians today.

No really, who are these people?

Your Sept. 26 cover text read: “Inside the mind of a Donald Trump voter: They are not all ‘deplorables,’ motivated by bigotry and hate. Here’s why so many perfectly rational, everyday Americans are going to vote for him.” I agree that not all are motivated by bigotry and hate, but do not agree that their stated reasons are perfectly rational. The most glaring, but not the only non-sequitur, is the statement: “I am considered a terrorist because I am a Christian, a veteran, a white conservative, law-abiding, born in America citizen.” That is totally irrational, and sad.

Oh no, these Trump voters are not bigots, just horribly misinformed (“Why I’m voting Trump,” International, Sept. 26): about Benghazi and the supposed controversy around the Clinton Foundation, about which candidate would make the U.S. a reliable international ally, etc. But for these “non-bigoted” Trump supporters to be that ill-informed, one has to wonder whether it’s wilful.

How does an entitled BS artist/entertainer with no political experience find support among those whom you describe as perfectly rational, everyday Americans? Your panel seemed to be pinning their same old conservative hopes on “the Donald” and taking it all on faith. A lot of what I read was the usual ill-informed, insidious ideas pushed by Republican ideologues. Dismissing diligence and honour as political correctness. Propagandist fears taken to ridiculous lengths. A white Christian veteran feels his country considers him a terrorist? That’s a bit over the top. There was a second-generation Amercian on the panel who should be more sympathetic toward people from troubled counties seeking a better life in the U.S. Would Trump have let Koreans in after a Korean war? I would have liked to hear from at least one politically intelligent individual from any walk of life who could explain how Donald Trump is the one to handle the very complicated problems he’ll face if he takes office.

Trump supporters are mistaken if they believe that increased military spending will “make America great again.” The U.S. already spends more on its military each year than the rest of the world combined, yet its people continue to live in fear of terrorists, immigrants and neighbours of different races and religions. Americans cannot hope for security at home nor respect abroad until they recognize that there is a world of difference between being greatly feared, and being truly “great.”

The hero of Bella Bella

Larry Jorgenson, the mental health bureaucrat from Ontario who helped transform the town of Bella Bella, B.C. (“The town that solved suicide,” National, Oct. 3) is a true Canadian hero. He realized that people needed help and simply helped them. It’s amazing to me that the efforts of one man have had such an impact in the lives of so many.

The creativity of cultural mixing

Cultural ideas are not patentable (“A win in the fight against cultural theft,” Andray Domise, Oct. 3). Their exclusive use is no one’s birthright. We all need to use, mix, and develop ideas from other cultures to create new forms of art. Jazz is the collective product of black, white, and Latin musicians. If the pioneers of jazz had to hire consultants to ensure their music was culturally respectful, they never would have gotten approval—jazz was considered to be “the devil’s music.”

Leonard Cohen’s not the only one

In saying that “there’s no real precedent in pop music” for what your headline calls “Leonard Cohen’s third act” (Music, Oct. 3)—going years without a hit and fading from public consciousness only to be resurrected in glory years later—writer Brian D. Johnson is evidently unfamiliar with an even more astounding story. In the early 1970s, Sixto Rodriguez toiled in obscurity while putting out astonishing psychedelic folk music, often compared to Bob Dylan at his most articulate and soulful best. Rodriguez completely disappeared from the musical mainstream, fading into street life in his native Detroit, and much of the world assumed he was dead. Then the Oscar-winning documentary Searching for Sugar Man captured the fairy-tale-like story of this musical genius and reintroduced his brilliant music to us all.

Seeing the image of the proposed expansion for Château Laurier (The Interview, Oct. 3) gave me a rush of pleasure, so I was sorry to read it is receiving significant negative criticism. I hope after the initial surprise and shock, folks will see how beautifully it reflects the essential qualities of the original. From its deep-set vertical windows to materials and colour shifts, it appears both deeply respectful and relevant.

The lawyer for Justice Robin Camp asserted that the judge had an “education problem,” which is to explain his inappropriate comments to a sexual assault complainant (“Above the law,” National, Sept. 26). It was actually a failure of common sense and decency. It is a character problem. Most people would know that these comments are inappropriate and outdated. He acted on his privilege to revictimize this woman and made her second-guess herself, leading to thoughts of suicide. It was his responsibility when appointed to domestic violence court to seek out the training offered. The idea that “judges are insulated from the realities of people whose lives don’t cross paths with their own”’ has some merit. But in this case we are talking about women: 51 per cent of the population. He’s not a cloistered monk. It reminds me of judges who allow the Lolita defence where child victims of rape are accused of “seducing” their rapist.

Where are the Paralympics?

I eagerly anticipated your observations following the Paralympics. What a letdown. The only commentary was that the visually impaired men’s 1,500-m medallists were faster than their able bodied counterparts in the Olympics (“Beating records blind,” Good News, Sept. 26). What about all the other incredible athletes who competed in Rio against mobility issues daily in life, not only in their athletic fields? They showcase their skills, not their disabilities, and present amazing role models for handicapped children worldwide. Surely they deserve to be in the spotlight once every four years, in the media as well as on the Paralympic podium.

I am livid at the fact that there has been no coverage in Maclean’s of the 2016 Paralympic Games in Rio, which took place between Sept. 7-18. World records were broken in many sports. A delightful young woman named Aurelie Rivard won three gold medals and one silver while setting two world records and a Paralympic record in the pool. Why was she not on the cover of Maclean’s, as Penny Oleksiak was in August?

Pipeline to the North

John Cruikshank from Prince George has an excellent idea about a pipeline from Fort McMurray to Churchill (“A place that might want a pipeline,” Letters, Sept. 26). I am surprised that this has not been considered since it would simplify pipeline construction immensely as well as benefit a Northern community. The federal government always talks about developing the North: now is the time to actually do something. Northern Europe, Russia and Alaska have many pipelines built even further north so building a safe pipeline shouldn’t present any challenge.