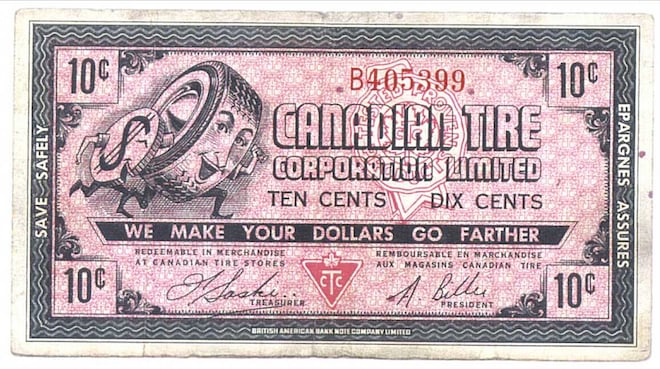 In a new report, Moody’s Investors Service, hailed the power and influence of Canadian Tire money as this country’s unofficial other currency.

“One of Canada’s most powerful retailers, Canadian Tire, is a concept that is completely foreign to U.S. retail, and its market position and ‘hold’ over the Canadian consumer is often both misunderstood and underestimated. The company sells products ranging from spark plugs and tires to sporting goods and apparel, with food offered in some of its locations. Its proprietary ‘currency,’ Canadian Tire money, which is a by-product of its loyalty program, has been accepted across Canada by multiple retailers and could almost be described as a ‘sub-fiat’ currency.”

Coming from Moody’s, one of the world’s most powerful debt rating agencies, that’s akin to giving Canadian Tire money a AAA credit rating (which, incidentally, would be one notch above the debt rating that Moody’s rival, Standard & Poor’s, currently ascribes to the U.S. government.)

1. A lawn mower: For 15 years, Brian McPherson of Edmonton stashed his Canadian Tire money away, building up a minor fortune. In 2011, he cashed in $1,053 to buy a riding lawn mower.

2. A music album: In 2011, Toronto musician Corin Raymond put out a call for Canadians to donate their unwanted Canadian Tire money toward paying for his next album, to be recorded at Rogue Studios, which has a policy of accepting the retail currency at par. By early 2013, he’d raised more than $6,000 (weighing 25 kilos), and used the money to release a 20-song album of Canadian songs called Paper Nickels.

3. Six shopping carts of supplies for the homeless: In 2007, a four-month fundraising campaign in Vancouver brought in $1,100 worth of Canadian Tire money, which the store matched, to go toward buying 60 sleeping bags, 60 packets of socks and 20 thermal blankets for the Lookout Shelter.

4. Tourist trinkets in Jamaica: According to one news report in 1990, a beachside vendor of handicrafts advertised that he would accept Canadian Tire money for his goods. He had family in Canada and would send the funny money to them.

5. A $480 repair bill: When a Trois-Rivières, Que., man showed up at Canadian Tire to pay for four new tires and a wheel-alignment job in 1996, he brought with him a suitcase stuffed with the store’s currency. It wasn’t his first big purchase with the money—he claimed to have bought his first bike at age 9 with Canadian Tire money he’d scrounged up.

6. Beer and liquor: Pete’s Peanut Pub of Calgary and Liquor International of Edmonton both made headlines when they announced they’d accept Canada’s other national currency as payment for booze. The Edmonton liquor store said on some days it took in $200 worth of the Tire cash.

7. Criminal charges: In 1998, thieves broke into a home in Kingston, Ont., and made off with $4,000 worth of personal property, including $600 in Canadian Tire money. Police gave Canadian Tire stores in the area a heads-up, and sure enough the next day someone made a large purchase using Canadian Tire cash. When several youths tried to return the merchandise for real cash three days later, police were notified, leading to charges of breaking and entering and theft against an 18-year-old man.