Need-to-know factoids from the Maclean's Book of Lists

The Trans-Canada Highway is the longest highway in the world, stretching from St. John’s to Victoria. Both cities consider themselves the starting point; journalist Walter Stewart once observed it is the only road on which you can drive 7,714 km just to get back to the beginning again.

Here are some other facts about Canada’s national road from Mark Richardson, who is driving across Canada this summer to mark the highway’s 50th anniversary and blogging about it for Maclean’s at Trans-Canada Trek.

1. For most of its length, there are alternative highways that are also considered the Trans-Canada. In the Maritimes, for example, you can drive on the TCH through Prince Edward Island, or you can stay on the highway and completely avoid the island province. In Ontario, you can follow the popular scenic route beside Lake Superior, or head deep into the woods through Kapuskasing. And in the West, the Yellowhead Highway that links Manitoba to Edmonton and Prince Rupert is also considered TCH. In total, about 12,800 km of road are classified as Trans-Canada Highway.

2.To qualify as Trans-Canada Highway, the paved road must be at least 6.7 m wide with unpaved shoulders of at least another 3.3 m on either side. Hills cannot exceed six degrees of slope angle, and drivers must always be able to see at least 183 m down the road ahead. It took until 1971 for the full length of the road to be completed to this standard.

3. It may link the nation, but the feds are only responsible for sections of highway that pass through national parks. The provinces look after every-
thing else.

4. It was opened officially by prime minister John Diefenbaker in 1962 when the road was completed through the Rogers Pass in British Columbia. There was no playing of O Canada at the start of the ceremony, though, because the bus carrying the instruments of the band of the Princess Patricia’s Canadian Light Infantry had taken a wrong turn out of Calgary. It arrived in time for the band to play God Save The Queen at the end.

5. The opening ceremony was boycotted by the governments of New Brunswick (nobody available to attend, apparently) and Newfoundland (upset that the feds weren’t paying more money toward construction, which was still mostly gravel across the province). B.C. premier W.A.C. Bennett skipped the event too; he also wanted more federal construction money and had officially opened the road through the pass himself a month earlier at a nearby spot, calling it B.C. Highway No. 1 and never once mentioning Canada.

6. It was only in 1942 it became possible to drive completely across the country on Canadian roads, when a final 246-km stretch of gravel highway was constructed in northern Ontario. The first people to make this drive were R.A. Macfarlane with Kenneth MacGillivray in 1946. Macfarlane was awarded a motoring medal for doing so.

7. Construction costs were highest in British Columbia’s mountains and northern Ontario’s swamps, but also in flat Prince Edward Island, where all the rock for the highway’s base had to be shipped into the province across the Northumberland Straight.

8. There are three ferries that are considered to be part of the official Trans-Canada Highway: between Horseshoe Bay and Nanaimo in British Columbia; Port-aux-Basques, Nfld., to North Sydney, N.S.; and Caribou, N.S., to Woods Island, P.E.I. There’s also a giant bridge—Confederation Bridge, which links P.E.I. to New Brunswick—and the Canso Causeway, connecting Cape Breton to the mainland. 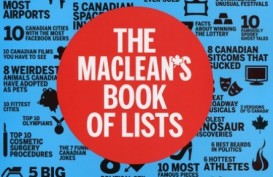 Have you ever wondered which cities have the most bars, smokers, absentee workers and people searching for love? What about how Canada compares to the world in terms of the size of its military, the size of our houses and the number of cars we own? The answers to all those questions, and many more, can be found in the first ever Maclean’s Book of Lists, hitting stands in time for Canada Day.