Rifles that jammed, towns that flopped, plus planes, ice ships and automobiles

Tom Villemaire, who co-authored the books Colossal Canadian Failures 1 and 2 with Randy Richmond, and who publishes Historylab.ca and the podcast Seemed Like a Good Idea at the Time, shares his favourite uniquely-Canadian blunders.

1. Ross Rifle: Arguably the biggest failure in Canadian history. The Conservative government of Robert Borden selected the Canadian-made hunting rifle over the British Lee-Enfield for use in the First World War. The Ross Rifle overheated if fired too much and jammed if exposed to mud, like, say, from a trench, and the bayonet would fall off if you ran. It endangered thousands of troops who relied on it in battle. It was, however, a great hunting rifle.

2. Habakkuk: This was an idea of Geoffrey Pike, an Englishman, but Canadian Liberal prime minister William Lyon Mackenzie King invested $100 million (in 1942 dollars) in it. The plan? Build ships out of a substance made of ice and wood pulp, things Canada has plenty of, to use in the Second World War. Habakkuk aircraft carriers with payloads of hundreds of planes would provide cover for invasions and convoys. You know, until they melted. A test ice ship was built at Patricia Lake, Alta. It all came to an end when scientist killjoys explained that no one could make enough “pykete,” as the ice-wood pulp mixture was called, in one winter for even a single ship.

3. Sprung Greenhouse in Newfoundland:This strange industry child of Progressive Conservative premier Brian Peckford’s provincial government and Charmar Holdings Ltd. in the late 1980s had the goal of bringing futuristic greenhouses, developed by Calgary businessman Philip Sprung, to the rock. Supposedly capable of accelerating plant growth, the sprawling complex would theoretically produce 4,000 tonnes of produce a year. Oh, scientists warned there wasn’t enough daylight, but that didn’t stop the government from investing $14.5 million. Newfoundland, fruit basket to the world? Um, no. The hydroponics plant failed almost immediately. The province bought it out for $3 million and sold it for $1 to new investors. It closed for good in 1990. 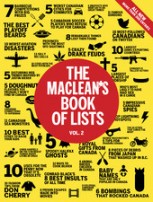 4. Vancouver’s first ambulance: In 1909 the city got its first ambulance. Everyone was very excited. On its first trip with the city crew it ran over an American tourist at the corner of Pender and Granville. He became the first patient transported in the ambulance.

5. Canada’s not-highest mountain: Canadian botanist David Douglas has a big tree named after him, the Douglas Fir. He was also known for a long time as the man who discovered the tallest mountain in Canada. In 1827, he named it Mount Brown after another botanist. Turns out Douglas wasn’t even close about the height of the mountain. In fact, if he looked around from that mountaintop, he would have seen other higher peaks all around. Still, for almost 70 years it was called the highest peak in Canada. Douglas was a great botanist but not so much a good surveyor.

6. Fast ferries: Glen Clark, the NDP premier of British Columbia in the late 1990s, had what sounded like a good idea—bring shipbuilding back to British Columbia by creating a fast ferry that would be trendsetting. The plan was for three ferries to be built at $70 million each. Even with cost-cutting measures that crippled the fleet, the ships cost twice that much to build and the program topped out at almost $450 million. By the time the Liberals came to power in B.C., the ferries were up for sale. They were sold for $20 million. Not each—for the whole fleet of three.

7. Springmobile: Tom Doherty built a three-wheeled vehicle in Sarnia, Ont., powered by a big spring. Designed to be a cheap substitute for the newfangled cars, his 1895 invention was called the Springmobile by some locals. It would accelerate 3 to 5 kilometres an hour and travel about two blocks. Then you’d need to get out and crank up the spring. It didn’t sell well and Doherty switched the spring to an internal combustion engine. It was banned from use in town because it was so loud it frightened the horses. He eventually got out of the car manufacturing business and went into politics. He was somewhat more successful there, becoming mayor of Sarnia.

8. Cygnet II:Alexander Graham Bell was a smart guy but not all his ideas were winners. His idea for the Cygnet II was to give his plane lift with tetrahedral kites, as in two wings that looked like a wall of kites. He built a prototype at Baddeck, N.S., and Canada’s premier pilot J.A.D. McCurdy had the honour of testing it on Feb. 22, 1909. The Cygnet II swanned around on the ice of the frozen lake but there wasn’t an engine made that could get the 4,000 kites moving fast enough to get airborne.

9. Townsend: Ontario in the 1970s had some problems. The Progressive Conservative government of the day was being criticized for not dealing with the chronic housing shortage. The solution, arrived at by provincial treasurer John White, was to create cities. One of these was near Nanticoke and was called Townsend. In 1974, the province spent the equivalent of more than $260 million in today’s money to buy 3,700 hectares. The population was supposed to be 100,000 by year 2000. Today about 1,500 call it home.