A Baltimore oriole was my gateway to birding. I'll never need another hobby.

Discover your ‘spark bird’ and keep your eyes trained skyward. Catching a glimpse can bring solace and joy. 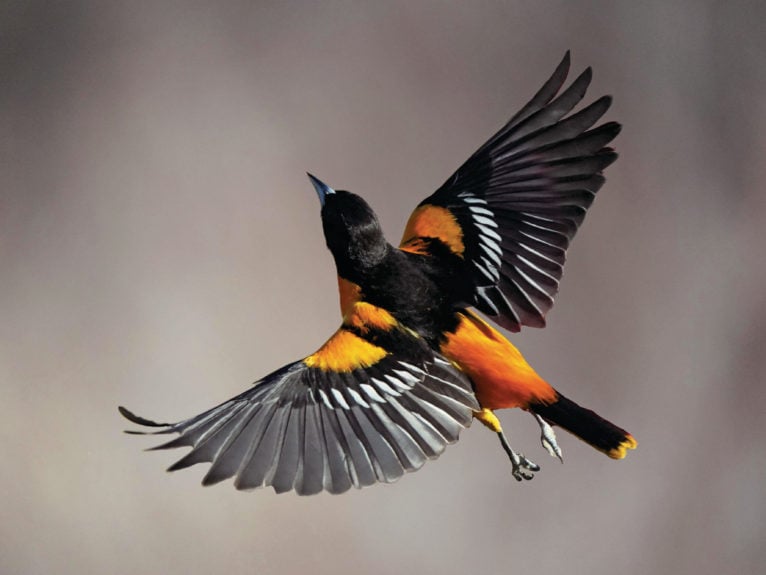 A speck of orange in a treetop, a recent visitor from far away, offered a fleeting glimpse of a minor miracle. A tiny Baltimore oriole had flown north, whipped past borders closed to human travellers, oblivious to the novel coronavirus and racial tension erupting below, and settled alongside the Rideau Canal. That’s where I saw him, and moments later his female mate, while on a bike ride in May. Those birds could have flown from as far away as northern Venezuela, a journey of several weeks that left them exhausted as they landed in Ottawa. Soon they’d grow stronger, singing their beautiful song and chasing each other around the periphery of forests. Then they’d breed and eventually depart for their winter homes, leaving their young to find their way south by harnessing the Earth’s magnetic field.

When I spotted the birds and stood gawking, a fellow cyclist along nearby Colonel By Drive remarked on the rarity of a dual sighting. Typically, he said, they’re more common at the Dominion Arboretum a little ways north and east. These kinds of conversations about sightings are catnip for birders. He finished with a compliment: “Good eye.” The confluence of that sighting and kindness, delivered in the middle of a global pandemic on a beautiful day in the nation’s capital, within view of a pair of birds who’d flown overseas, by a man who so happened to be cycling on a road coincidentally closed to cars, seemed impossibly serendipitous. A lifelong Toronto Blue Jays fan isn’t supposed to admit this, but those Baltimore orioles produced the closest possible sensation, under the circumstances, to any other year’s first pitch on a sunny spring afternoon at the ballpark.

The pandemic is a nearly universal downer. Everyone finds their own salvation, and mine has been to look up at the sky. That’s the only reason why I stared dumbly at those treetops as I cycled down the canal. The old saying might be “keep your chin up.” But for me, it’s all about keeping my eyes up.

When you talk to birders about how they got their start, they’ll tell you about their “spark bird.” Dudley Edmondson, a writer and photographer, fell in love with the peregrine falcon as a teenager in Columbus, Ohio. Those particular falcons, and birds of prey more broadly—eagles, hawks, ospreys—lured him to northern Minnesota three decades ago. He owns a home on the edge of the Hawk Ridge nature reserve, a premier spot on the tip of Lake Superior to observe raptor migration as they find their way from summer homes as far north as the Canadian Arctic to wintering spots in South America.

When he’s fly-fishing or out on a bike ride, Edmondson typically eschews binoculars. He prefers to bird by ear. Sometimes, standing on the edge of a field, he takes in his surroundings by sight and sound simultaneously—a superpower of the ornithological domain. “You’re looking at an indigo bunting in the tree,” he says, “but you’re hearing a savannah sparrow singing behind you in the fields.”

Edmondson is Black. This spring, he watched the headlines burst out of Central Park: Christian Cooper, a fellow Black birder, confronted by police after a white woman named Amy Cooper—no relation—dialled 911. Christian had requested that Amy leash her dog in a leash-only section of the park. Amy told the police that a Black man was threatening her life. Christian caught it all on tape.

Enter #BlackBirdersWeek, a grassroots explosion of cultural connectedness that migrated across Twitter and brought Black birders together. That’s how I found Edmondson. “I’ve been at it for 40 years,” he says. “I never thought it would ever happen, that I wouldn’t be the only Black birder that I knew.” 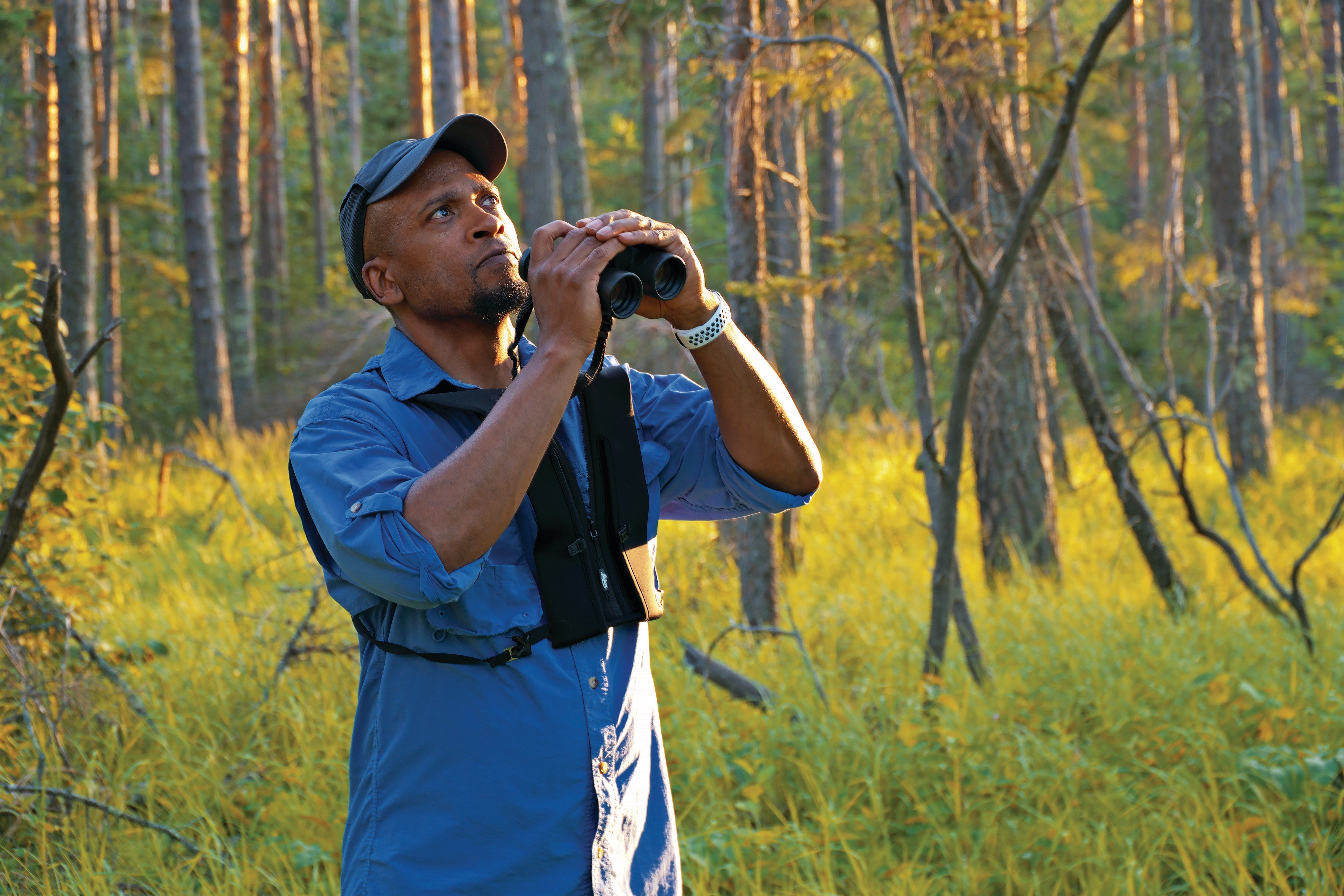 In 2006, Edmondson published The Black & Brown Faces in America’s Wild Places, a book that crystallized his mission to “create a set of ‘outdoor role models’ for the African-American community.”

“I’m always pushing people of colour to access our public lands better,” he says. “They do not belong to white people. They never have.”

The mould was set for Edmondson from an early age. When he was growing up, his family would picnic near the Hoover Reservoir in outer Columbus, and he’d “go putzing around the woods by the picnic area and just be at peace.” Kids teased him. “People used to call me Euell Gibbons,” he says, a reference to the folksy outdoorsman famous for foraging edible wild plants. “That wasn’t going to stop me from appreciating nature,” he says. “I was determined to do what was best for my mind.”

In his senior year of high school, Dudley and some classmates fundraised for a birding trip to south Texas. After enough Frisbee and candy sales, the small group packed themselves into a Toyota Tercel and drove from Ohio to a whole different world along the Rio Grande River, a dustier climate than anything he’d ever seen, and birds he’d never spotted back home. There was no turning back. Edmondson was a birder.

I instantly intuited my own moment of zen in Edmondson’s connection with the wildlife around him. “Animals feel like family. I know that probably sounds weird as hell,” he says. “I get this sense of being home, being with things that I love.”

It was by now clear that Baltimore orioles were my spark bird. I needed to find someone else who felt the same way about them. Ontario Field Ornithologists pointed me to Ian Shanahan, their director of fundraising. When I called him, an oriole happened to be singing right outside his home office in Brighton, Ont., not far from where he grew up. Jackpot.

Shanahan explained the weeks-long journey north each spring exhausts migratory birds. “Imagine flying across the Gulf of Mexico at night,” he said, “and not being able to swim.” They’re lured to southern Canada by long days—several hours more daylight than their wintering grounds—and veritable feasts of nectar and insects, ideal conditions for breeding. Every oriole, as a matter of fact, is born up north.

“When they do first arrive, they’re very sluggish. Their song is a little quieter. They’re not as noisy,” he says. But every year, the fiery little flyers are just the beginning. Orioles are a harbinger of indigo buntings, which navigate by the stars; hummingbirds, which fly alone; and purple martins, which eat and drink exclusively during flight. “It opens the floodgates,” says Shanahan.

Orioles and their offspring often return to precisely the same spot, even the same tree, when they fly north. They rest at forest edges, atop shade trees, often near people. Shanahan worked at Presqu’ile Provincial Park as a teenager, and for several summers running heard the orioles’ “funny song”—there was no mistaking that piercing tone. The experience stuck with him. “That combination of bright orange and black, sipping nectar from an apple blossom, that is universally beautiful,” says Shanahan. “It’s unifying.”

In mid-June, I was at a park in Quebec just across the river from Ottawa. This time I had a pair of binoculars, a total convert to the craft. I wandered around on foot, my head stuck skyward, scanning the treetops for signs of life. On a particularly clumsy foray, I turned my eyes back to the ground only to realize I was standing beside a pile of litter on a side entrance to a nearby casino. The only bird in sight was a crow nibbling on some roadkill. It was revolting. I had fallen into a trance.

On the way out of that park, my eyes scanned the sky, hoping for a gift from above. Then, a small miracle: a speck of orange in a treetop. A winged soprano, just where he was supposed to be, atop a leafy tree on the edge of a forest at the side of a lake. A visiting expat, scanning his old stomping grounds, facing the sunset he had chased north. Soon, he’d be gone. But not forever.

This article appears in print in the August 2020 issue of Maclean’s magazine with the headline, “The joy of looking up.” Subscribe to the monthly print magazine here.