Backstage during Toronto Fashion Week, I presented Joe Mimran with a 1983 issue of Maclean’s that featured Alfred Sung on the cover.

The Canadian fashion mogul flipped through the pages. “Wow, will you look at that,” he said as he discovered the short profile in which he appeared with his brother, Saul. The pair had partnered with Sung to build the brand that spurred Maclean’s to proclaim Sung “the New King of Fashion.”

“Look, there’s my older brother,” he said, pointing to himself in the 29-year-old photo.

Mimran, along with close to a hundred models, make-up artists, hair stylists, PR pros and media, was backstage at David Peacaut Square on the third day of Toronto Fashion Week.

Six designers debuted their collections between 4 p.m. and 9 p.m. The final spot of the evening was reserved for Joe Fresh’s Spring 2013 collection.

“It’s the ultimate compliment when people want to come and see what we’re up to,” said the man behind Canada’s most financially accessible clothing line. Since the brand’s inception in 2006, Joe Fresh show has been the biggest draw at Toronto Fashion Week.

Some might consider the fact Joe Fresh opened in Loblaw-owned grocery stores as emblematic of the speed at which fashion is disseminated today, but Mimran considers his brand outside such fast fashion retailers as H&M or Zara, who go from runway to the street in a blink of an eye. “We tend to be a brand that filters the trends and offers it to the consumer,” he explained. “We distill it more and are a little more realistic about our customer base.”

There are more than 300 Joe Fresh stores in Loblaw-owned supermarkets. Twelve are standalone shops. When Joe Fresh opened on Fifth Avenue in New York in March, Mayor Michael Bloomberg called it “the greatest Canadian export since Justin Bieber.” Five more stores have opened in and around the city. Next spring, 700 Joe Fresh shops are slated to open in select J.C. Penny departments stores.

But it’s not all business. “There’s the pure art,” Mimran said, “artistic, branding, marketing and the energy side of it.”

Mimran’s wife, Kimberly Newport-Mimran, is the designer behind Pink Tartan, a Mimran holding that showed its spring collection earlier in the week.

Mimran obliged everyone backstage who wanted a photograph. “They all want a photo for their Facebook.” His warm face, topped with a slicked back silver hair, was dominated by dark, over-sized eyeglasses. He fit right in the twentysomethings backstage.

As finishing touches were made on the ponytail extensions of Greta Constantine models getting ready for a preview cocktail walk, the room hissed and filled with the mist of hair products. The Joe Fresh models, most wearing minimal make-up, waited in two rows of black fold-out chairs. Most were on cell phones, save for one who had her nose buried in a copy of the The Four Noble Truths.  Vitaminwater bottles littered the floor.

The Greta Constantine models filed out, all a good six feet taller than every other non-model backstage. “Everybody get ready for Joe Fresh,” shouted a short woman dressed in black like the rest of the Redken hair and make-up crew.

She grabbed a towering model with strawberry-blond hair parted in the middle and pulled back into a pony tail at the nape of her neck. “We have 43 models and every single one of them has to look like this,” she told her team.

The woman in the fur vest approached a male stylist. “This drop is almost horizontal,” she said, pointing to the model’s hair swooped over the ear. “The drop has to go right at her eyebrow.”

Behind her, Kimberly Newport Mimran, tall and lean enough to be a model–and also dressed in black, save for Celine pointy gold heels and gold bracelets around one wrist–made her way backstage.

“Hello Mr. Sinclaire,” she said to Paul Sinclaire, formally of Club Monaco–the clothing company that Joe Mimran created in 1986 after having no luck finding a well-made, simple 100 per cent cotton white shirt, and sold 13 years later to the Ralph Lauren Co. “I just wanted to say congratulations,” nodding toward her husband. “You know, break a leg.”

Mimran watched 60-year-old Pat Cleveland, an American model who found fame during the ’70s modeling for Halston. Her face, despite a heavy curtain of make-up, glowed, and when she stood up from her chair, where she looked petite, even frail, Cleveland, like the other models, towered over everybody.

On her way to her front-row seat, Newport-Mimran told her husband to break a leg.

As the lights went down in the main room, dozens of people scrambled to find seats in the glow of a hundred iPhones.

A video projection at the front of the runway played Hitchcockian clips, Twiggy-like ’60s era models with heavy black eye make-up dancing, spiraling black and white Op art, and a scene from a Salvador Dali short.

And then Pat Cleveland walked the runway, with more sass and verve than the other fiercely focused–and flawless–automatons who followed her. The progression from highly structured white pieces, many with intricate lace cut-outs,  gave way to flashes of silver, include underwear paired with a white cotton button-up, and geometric black and white ensembles, and moved to fluid, softer designs splashed in shades of blue. More metallics, including gold, followed, and plenty of textured materials. Even though there were nods to the ’60s throughout, the cuts and shapes of the collection looked like they were from the future. 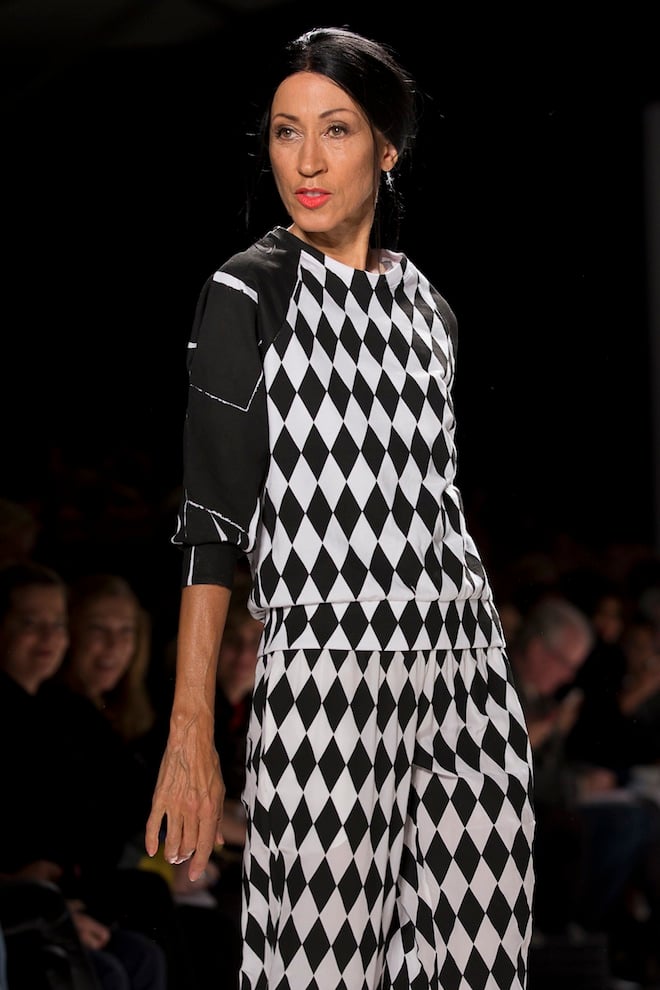 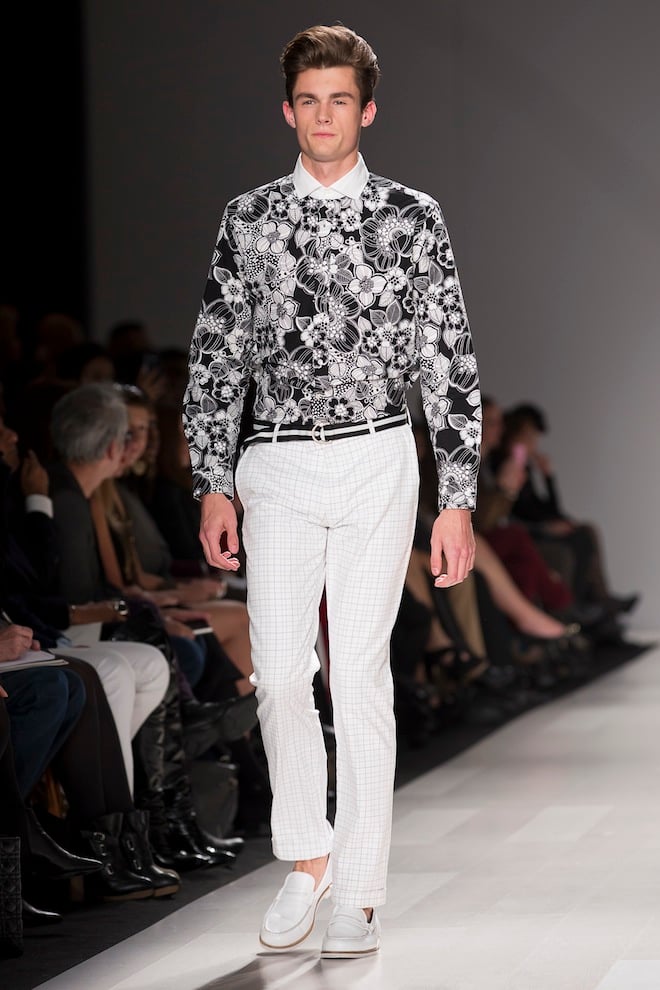 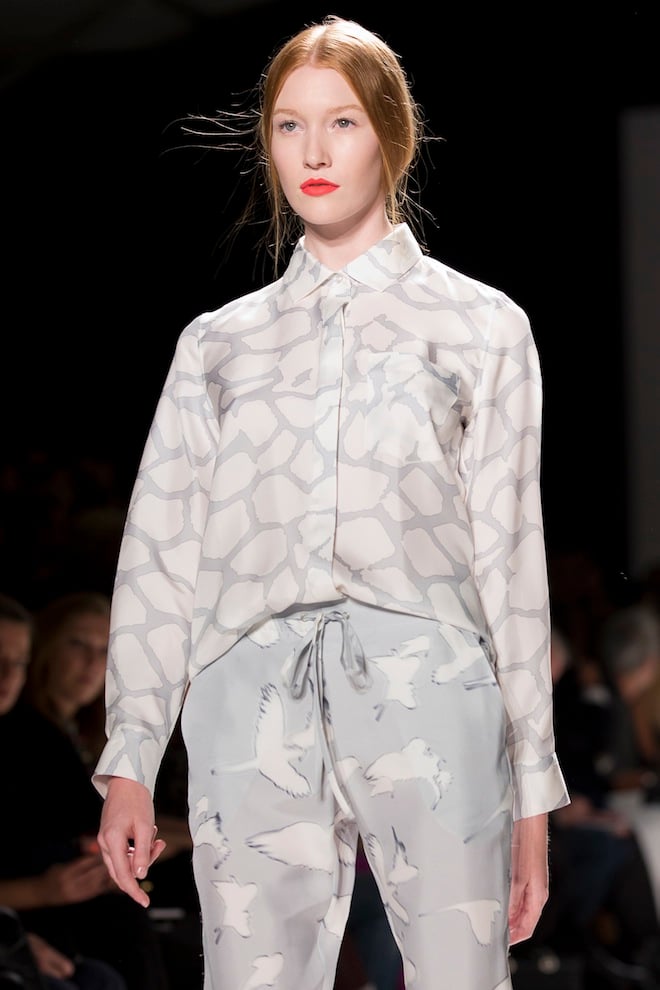 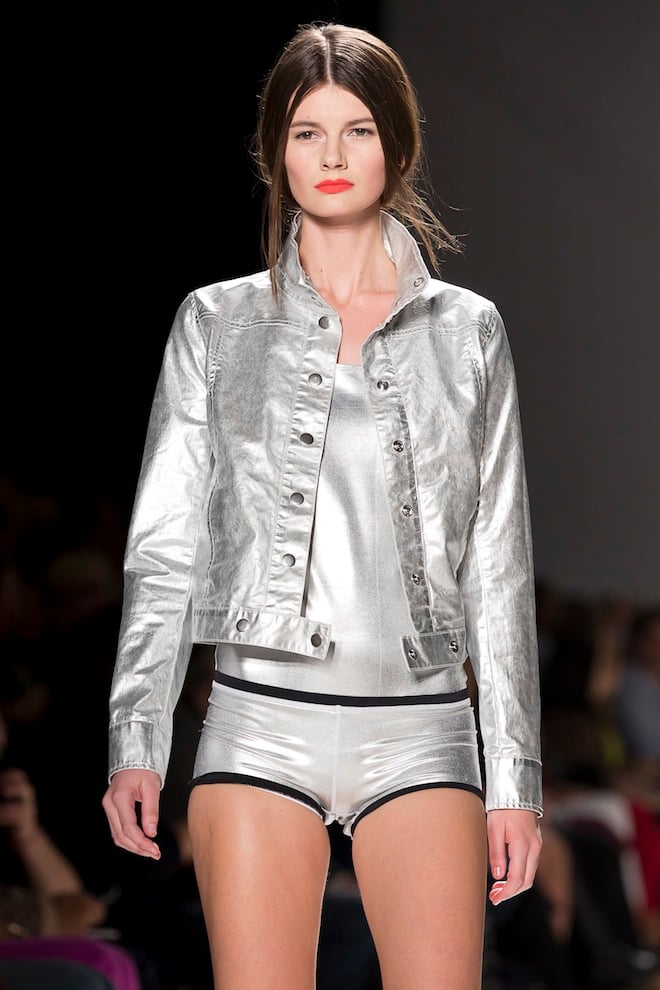