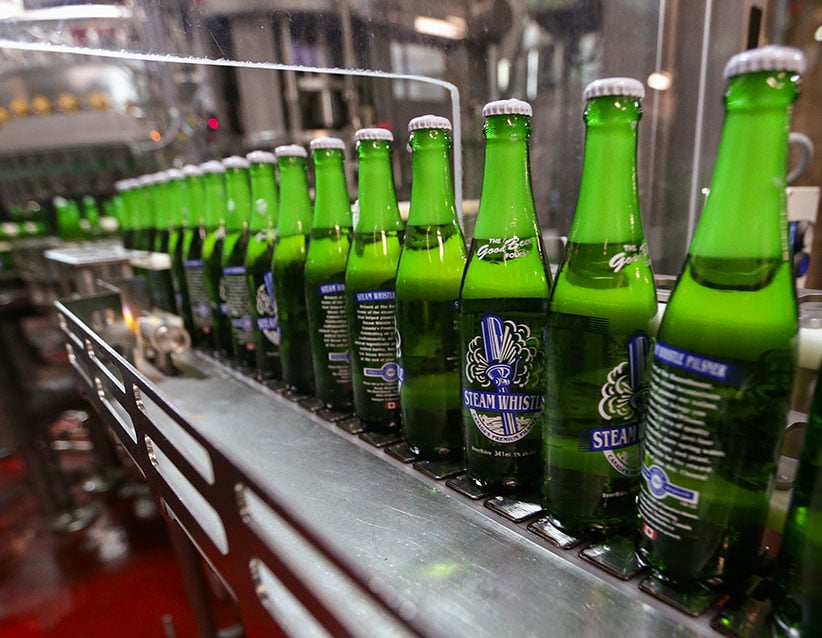 Nowadays “Muddy York” may be more aptly called “Sudsy York.” Over the past two years, an explosion of new breweries and brewpubs in Toronto has earned the city a reputation as a destination for beer enthusiasts.

Often named after the communities in which they are located, these microbreweries place craft beer at the heart of spirited neighbourhood gatherings and fuel hyper-local economies, according to local business owners.

Travel to Bellwoods Brewery on a Saturday for instance and you’ll see people spilling off the string-lit patio or lined up at the adjacent shop to buy bottles of Roman Candle IPA and Wolf Wizard pale ale. Located on downtown’s uber trendy Ossington Avenue, Bellwoods caters to everyone from tattooed hipsters to young parents with strollers in tow.

Luke Pestl, brew master and co-owner at Bellwoods, says location has been crucial to the success of the venture. “This is a vibrant neighbourhood and people like buying things and supporting small stores. People know you by name. It’s a social thing [and the brewery] becomes a vibrant hub.”

As recently as four years ago, Pestl and fellow beer lovers drove across the border to Buffalo to sample new and interesting brews. Now they can tap into an ever-growing list of local breweries producing seasonal lagers, ales, pilsners and more with names like Cocoa Woman, Paradise Lost and Belgian Farmhouse Stout.

The Ontario Beverage Network lists 28 breweries currently operating in the city, among them Bellwoods Brewery, Junction Craft Brewing and Lansdowne Brewery. Ten have opened since 2015 and another 21 are in development.

“For a long time our notion of beer was industrial lagers, big companies had a stranglehold on the marketplace,” says Johnson. “People are starting to understand that beer can be pretty versatile [and those] who said I’m not a beer person, discovered they weren’t trying the right beers.”

In the 80s, Canada had 10 breweries and the big three–Molson, Labatt and Carling O’Keefe–supplied 96% of the nation’s (mostly lager) beer. That stranglehold inspired a small number of brew masters to start brewing styles of beer—Belgium wheat beers, stouts, pale ales–that had disappeared years earlier.

Greg Taylor and Cam Heaps, who founded Steam Whistle Brewing in Toronto in 2000, note that the recent popularity of craft breweries represents a return to beer’s roots.

“Historically a brewery was a local thing, because beer is best drank in its freshest state,” says Heaps. “What we’ve learned over the past years about craft brewing and brewing in general,” adds Taylor, “is breweries really need to have a place [where] consumer can learn the magic of craft beer.”

And if you can produce a good beer, there is money to be made. Brewers typically charge from $7 to $13 for a 500-ml bottle of beer. Bellwoods, for instance, produces about 6,000 500-ml bottles weekly at their brewpub. Space is so tight that Bellwoods temporarily moves the kitchen serving the brewpub to bottle beer. Demand is so high Pestl worries they will have to close the pub on days following busy summer weekends because they’ve run out of beer.

It’s no wonder Pestl and partners have two new facilities in the works. A production brewery with bottle shop is slated to open this July in the north end of the city, while a larger, midtown brewpub and events space is expected to open in 2017. Since January, Radical Road Brewing Co., Sextant Craft Brewery, Muddy York Brewing, Folly Brewpub and Shacklands Brewing all announced new ventures as well.

Ontario Craft Brewers estimate sales for the sector at $240 million in 2015, up 20% from the previous year, and pegs the overall economic impact of the province’s nearly 200 small brewers at $600 million annually. More than 1,500 workers are employed by the industry and estimates of craft beer’s total market share range between 6% and 10%.

While craft beer still represents a tiny slice of overall beer sales in the country that hover around $9 billion annually, the City of Toronto believes in the sector enough that in 2015 they passed a proposal to work with small-scale craft breweries, craft beer bars and restaurants to grow the sector and develop a Craft Brewery Culinary Trail. The provincial government meanwhile announced a two-year, $1.4-million Microbrewery Strategy in their February budget to assist with marketing, training and tourism opportunities.

“I think of places like Left Field Brewery [in Toronto’s East end] where people come with strollers and kids and they hang out for the day, spend some money and watch a baseball game,” says Johnson. “Once you’ve had that vibe and understood the beer can be like that, it’s tough to go back to buying a 2-4 at The Beer Store.”