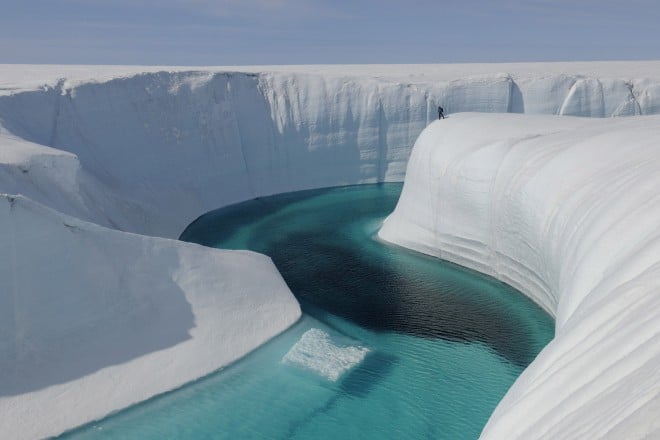 For the climate-change skeptics out there, who cling to their God-given right to ignore science and stoke debate with the fossil fuel of old-growth ideology, Chasing Ice should be required viewing. And for those of us who are already sufficiently alarmed, and don’t think we can bear to watch any more inconvenient truths, it’s still required viewing. This is an eye-opening documentary, full of epic beauty and astonishing revelations (of the non-Biblical kind).

Which is not to say it’s a truly great film. Too much of the narrative dwells on the trials and tribulations of its hero, National Geographic photographer James Balog, whose personal quest can’t possibly compete with what he’s capturing through his lens. This story did not need “humanizing.” We could care less about Balog’s crumbling knee and its multiple surgeries as he struggles to rappel down an ice face—not when we’re about to see a section of Greenland’s ice sheet the size of Lower Manhattan, and twice as tall, calve into the Arctic Ocean in real time. Besides, the Extreme Ice Survey, which this film documents seems very much a team effort, even if Balog’s sensitive eye endows it with an esthetic grandeur reminiscent of Manufactured Landscapes, another movie that looks over the shoulder of a celebrated photographer. 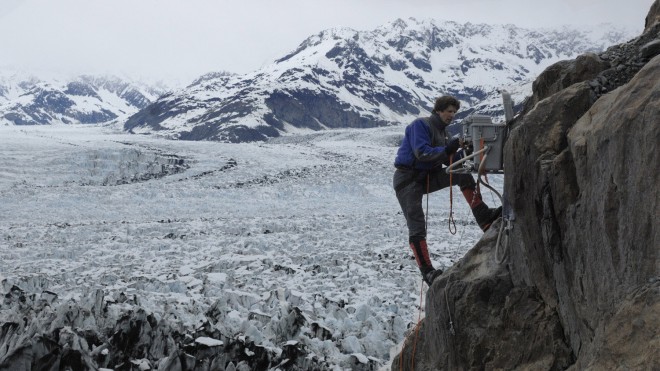 Chasing Ice has won awards at Hot Docs, Sundance, and South By Southwest festivals, and will likely be Oscar-nominated. It was created by Colorado director Jeff Orlowski and the Oscar-winning team behind The Cove, producer Paula duPre’ Pesmen and writer Mark Monroe. And its meditative score, in a Philip Glass style, comes from J. Ralph, the composer for The Cove and Man on Wire.  Altogether an impressive team.

The film documents a project that begins in 2007 and stretches over years as Balog’s team install time-lapse cameras to observe shrinking glaciers in remote locations that include Iceland, Greenland, Alaska, Montana and the Alps. Along the way, using core samples of glacier ice, which trap bubbles of ancient air, scientists show irrefutable evidence that the global warming has risen and fallen in tandem with levels of carbon dioxide in the atmosphere for 800,000 years—and that CO2 rates, and temperatures, are increasing at a dramatic rate with greenhouse gases.

While ice serves as a time capsule for man-made climate change, it also provides the most the spectacular evidence of it. The cameras show how, as an Arctic glacier dissolves, torrents of melt-water sink through crevasses and perforations and flow under the glacier’s base into the ocean. As the melt-water creates a feedback loop, we see how this accelerating process will reach an irreversible tipping point regardless of what happens to the weather or global warming.

The exquisite beauty of the vanishing ice, frozen in time-lapse photos, or caught cascading into the sea like a breaching whale may be of sentimental value. But it seems acutely relevant, as if the earth’s future lies in the crystalline depths of a world that is remote, alien and austere, yet serves as mankind’s ultimate biological clock.