For anyone who has ever dreamed of opening their own winery, but lacked the start-up funds, there’s a better way

Geography has always defined Canada, and weather is a national obsession. Both are critical to the production of Canadian wine from Nova Scotia to British Columbia. Maclean’s Wine in Canada: A Tour of Wine Country details the dedication and tenacity of grape growers and winemakers in a sumptuous, 145-page magazine that combines feature writing, stunning photography, tasting notes and insider’s tips from some of the nation’s top sommeliers. Look for it on newsstands now, or download the app. In the meantime, check out excerpts from B.C. sommeliers Rhys Pender and, below, Kurtis Kolt.

Imagine you’re a fan of Okanagan chardonnay, but it rarely has the perfect amount of oak. You idly think about buying a little piece of land where you can grow your own grapes and add all the oak you want, but the dream dies when you realize it would cost millions to produce that imaginary award-winning wine.

Now there’s another way. In British Columbia, folks are turning to custom-crush facilities like Kelowna’s Bounty Cellars and Summerland’s Okanagan Crush Pad to create their own wines without the cost and commitment of a bricks-and-mortar operation. 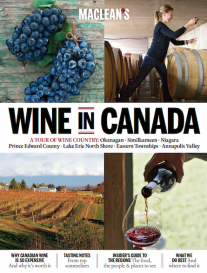 Christine Coletta, a veteran of the B.C. wine industry, and her partners were inspired by the success of custom-crush facilities from California to New Zealand. In 2010, Okanagan Crush Pad was born.

“It’s no longer just a playground for the wealthy,” she says. “We have so many educated, passionate people in the local wine industry who have this goal, but with land costs and everything else prohibitively high, we run a risk of them exploring their thirsts elsewhere and losing these great professionals.”

If you were to start a small, four-hectare winery in the Okanagan, start-up would cost upwards of $3 million. To have Coletta’s team, including her renowned winemaker Michael Bartier, help you make your own, you could purchase three tonnes of chardonnay grapes from a local grower for about $6,000, which should make about 200 cases (of 12 bottles). The winery cost will be an additional $55 per case on average, plus $2.50 a bottle for packaging and labels.

In 2011, Okanagan Crush Pad processed 225 tonnes of grapes to make 17,000 cases of wine for themselves and nine clients. The winery is now at capacity, processing 450 tonnes to make 33,750 cases for 12 clients. As they explore the logistics of expanding, rumours are that others are looking at similar businesses both in B.C. and Ontario.

So if Michael Bartier is such a great winemaker, why doesn’t he have his own winery where he’d have full creative control? It’s all about passing on his knowledge to make the best wines from the best grapes from the right vineyards.

“I’ve had some clients enter with ideas of copying a style [of wine] from another region, which is absolutely wrong in my opinion,” he says. “But by the time we’re done with them, they understand and have become champions of the idea that their own vineyard is a rare and precious spot, deserving of a wine that articulates this.”

Veteran B.C. sommelier Jay Drysdale wanted to make sparkling wines from premium Okanagan fruit using the traditional champagne method. After finishing the oenology program at Washington State University, he got his hands dirty at a handful of local wineries, but couldn’t afford to start up his own winery.

“When the Crush Pad came along, I got to thinking, ‘Wow, I can really do this now!’ ” Drysdale wanted to be as hands-on as possible. “Having a rock star like Michael Bartier in my corner, though, that really was my safety net,” Drysdale says, “I had such a clear vision of what I wanted, and Mike encouraged me when I was on the right track or was about to make mistakes. This happened from the very beginning, as he prevented me from using grapes from certain vineyards that wouldn’t have worked for the wine I’d hoped to make, instead introducing me to vineyards that were much more suitable for my needs.”

Drysdale’s Bella Wines has produced a couple of hundred cases of sparkling wines, all of which have been snapped up by local wine fans. He’s making his second vintage with Okanagan Crush Pad, doubling production from 250 to 500 cases. With places like Vancouver’s Four Seasons Hotel pouring his wines and a recent “best sparkling” win at the Great Northwest Wine Competition, he shouldn’t have trouble selling out the next vintage, too. With so many early successes, it seems the custom crush concept has a bright future ahead.